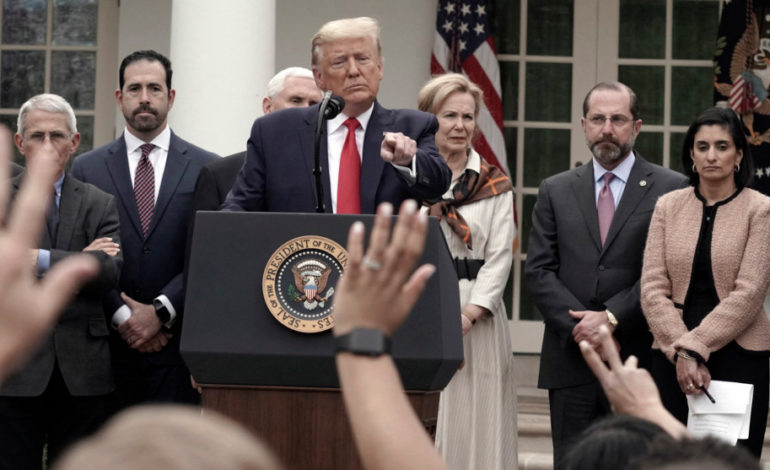 March 13, 2020, Washington, DC, United States: U.S. President Donald Trump speaks to the media at a news conference to declare National Emergency on COVID-19 coronavirus in the Rose Garden of the White House in Washington on March 13, 2020. (Credit Image: © Gripas Yuri/Abaca via ZUMA Press)

WASHINGTON, D.C. — Americans have been urged by President Trump to avoid traveling and gathering in public spaces in an effort to put a stop to the spread of the coronavirus.

Trump said the outbreak could last into July or August, although a national health expert clarified his estimate was just one possible trajectory and it could be under control sooner.

“If everyone makes this change, or these critical changes and sacrifices now, we will rally together as one nation and we will defeat the virus,” Trump said in the White House briefing room. “We’re going to have a big celebration all together.”

The new guidelines were announced during a press briefing on Monday afternoon. It has been recommended that Americans avoid gatherings of more than 10 people, avoid discretionary travel, avoid eating in bars, restaurants and food courts, and engage in schooling from home when possible.

“We’d much rather be ahead of the curve than behind it,” Trump said.

The comments marked his most direct appeal for Americans to take the virus seriously and avoid public settings where it can be spread easily, according to a report from The Hill.

The proposed changes to day-to-day life could last into July or August, he said, referring to answers he was given by public health officials.

Following Trump’s remarks, Dr. Anthony Fauci, director of the National Institute of Allergy and Infectious Diseases, clarified that the guidelines would not necessarily last until the summer months but rather that timeline was one potential trajectory.

“The guidelines are a 15 day trial guideline to be reconsidering,” Fauci said. “It isn’t that these guidelines are going to be in effect until July. What the president was saying is that the trajectory of the outbreak may go until then.”

Dr. Anthony Fauci, director of the National Institute of Allergy and Infectious Diseases, clarified after Trump’s remarks that the guidelines would not necessarily last until the summer months but rather that timeline was one potential trajectory of the coronavirus outbreak.

Trump said he wasn’t considering a nationwide lockdown, but that certain areas of the country with large numbers of cases could take such measures.

“At this point, not nationwide,” the president said. “We may look at certain areas, certain hotspots as they call them.”

On Sunday evening, the CDC recommended Americans avoid gatherings of 50 or more people for eight weeks.

Administration officials stood in front of screens that read “15 Days to Slow the Spread” with advice on best practices to avoid transmitting the virus.

Deborah Birx, a State Department official coordinating the White House response, added that millenials can help by speaking with each other about the importance of protecting all people, including their older family members who may be more susceptible to the disease.

Fauci urged Americans to take the new guidelines seriously even if they seemed to go “too far.”

“When you’re dealing with an emerging infectious disease outbreak, you are always behind where you think you are if you think that today reflects where you really are,” Fauci said.

“We hope that the people of the United States will take them very seriously because they will fail if people don’t adhere to them,” he said.