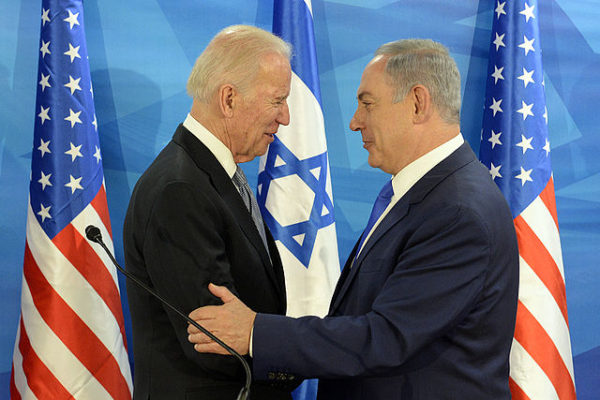 “I am a Zionist. You don’t have to be a Jew to be a Zionist,” current Democratic Presidential candidate Joe Biden, said in April 2007, soon before he was chosen to be Barack Obama’s running mate in the 2008 elections.

Biden is, of course, correct, because Zionism is a political movement that is rooted in 20th century nationalism and fascism. Its use of religious dogmas is prompted by political expediency, not spirituality or faith.

Unlike President Trump or Bernie Sanders, Biden’s only serious opponent in the Democratic primaries, Biden’s stand on Israel is rarely examined.

Trump has made his support for Israel the cornerstone of his foreign policy agenda since his inauguration into the White House in January 2017. The American president has basically transformed into Israel’s political genie, granting Tel Aviv all of its wishes in complete defiance of international law.

Sanders, on the other hand, came to represent the antithesis of Trump’s blind and reckless support for Israel. Himself Jewish, Sanders has promised to restore to the Palestinian people their rights and dignity, and to play a more even-handed role, thus ending decades of U.S. unconditional support and bias in favor of Israel.

But where does Biden factor into all of this?

Below is a brief examination of Biden’s record on Palestine and Israel in recent years, with the hope that it gives the reader a glimpse of a man that many Democrats feel is the rational alternative to the political imbalances and extremism of the Trump administration.

August 1984: Palestinians and Arabs are to blame

Biden’s pro-Israel legacy began much earlier than his stint as a vice president or presidential candidate.

When Biden was only a senator from Delaware, he spoke at the 1984 annual conference of “Herut Zionists of America.” Herut is the forerunner of Israel’s right-wing Likud party.

In his speech before the jubilant right-wing pro-Israel Zionist crowd, Biden derided the Palestine Liberation Organization (PLO) and Arab governments, for supposedly derailing peace in the Middle East.

Biden spoke of “three myths (that) propel U.S. policy in the Middle East”, which, according to the American senator, are, “the belief that Saudi Arabia can be a broker for peace, the belief that King Hussein (of Jordan) is ready to negotiate peace and the belief that the Palestine Liberation Organization can deliver a consensus for peace.”

Time only cemented Biden’s pro-Israel’s convictions, leading to his declaration in April 2007 that he is not a mere supporter of Israel — as has become the standard among U.S. politicians — but is a Zionist himself.

In an interview with Shalom TV, and despite his insistence that he does not need to be Jewish to be a Zionist, Biden labored to make connections with the “Jewish State”, revealing that his son is married to a Jewish woman and that “he had participated in a Passover Seder at their house”, according to the Israeli Ynet News.

This commitment to Israel became better articulated when Biden took on greater political responsibilities as the U.S. vice president under Obama’s administration.

At a packed AIPAC conference in March 2013, Biden elaborated on his ideological Zionist beliefs and his president’s commitment to “the Jewish state of Israel.” He said:

“It was at that table that I learned that the only way to ensure that it could never happen again was the establishment and the existence of a secure, Jewish state of Israel. I remember my father, a Christian, being baffled at the debate taking place at the end of World War II…” that any country could object to the founding of Israel on the ruins of the Palestinian homeland.

“That’s why we’ve worked so hard to make sure Israel keeps its qualitative edge in the midst of the Great Recession. I’ve served with eight presidents of the United States of America, and I can assure you, unequivocally, no president has done as much to physically secure the State of Israel as President Barack Obama.”

In one of the most fiercely pro-Israel speeches ever given by a top U.S. official, Biden told the annual Saban Forum at the Brookings Institution in Washington on December 6, 2014, that, “If there weren’t an Israel, we would have to invent one.”

In his speech, Biden added a new component to the American understanding of its relationship with Israel, one that goes beyond political expediency or ideological connections; a commitment that is founded on “moral obligation.”

Biden said, “We always talk about Israel from this perspective, as if we’re doing (them) some favor. We are meeting a moral obligation. But it is so much more than a moral obligation. It is overwhelmingly in the self-interest of the United States of America to have a secure and democratic friend, a strategic partner like Israel. It is no favor. It is an obligation, but also a strategic necessity.”

“My name is Joe Biden, and everybody knows I love Israel,” Biden began his speech at the 67th annual Israeli Independence Day Celebration held in Jerusalem in April 2015.

“Sometimes we drive each other crazy,” the U.S. vice president said in reference to disagreements between Israel and the U.S. over Israeli Prime Minister Benjamin Netanyahu’s refusal to halt construction of illegal Jewish settlements.

In response to a question by the news website AXIOS, which was presented to the various Democratic party candidates, on whether a Democratic president would relocate the American embassy back to Tel Aviv, the Biden campaign answered:

“Vice President Biden would not move the American embassy back to Tel Aviv. But he would re-open our consulate in East Jerusalem to engage the Palestinians.”

In an interview with the Wall Street Journal on October 31, Biden was asked whether he agrees with the position taken by his more progressive opponent, Bernie Sanders, regarding U.S. financial support to Israel and Jewish settlement.

Sanders had said that, “if elected president he would leverage billions of dollars in U.S. military aid to Israel to push Jerusalem to change its policies toward the Palestinians,” The Hill news website reported.

Biden’s response was that, “ .. .the idea that we would draw military assistance from Israel, on the condition that they change a specific policy, I find to be absolutely outrageous. No, I would not condition it, and I think it’s a gigantic mistake. And I hope some of my candidates who are running with me for the nomination — I hope they misspoke or they were taken out of context.”

March 2020: “Above politics, beyond politics”

Biden’s fiery speech before the pro-Israel lobby group AIPAC, at their annual conference in March, was a mere continuation of a long legacy that is predicated on his country’s blind support for Israel.

Biden’s discourse on Israel — a mixture of confused ideological notions, religious ideas and political interests — culminated in a call for American support for Israel that is “above politics and beyond politics.”

“Israelis wake up every morning facing an existential threat from their neighbors’ rockets from Gaza, just like this past week… That’s why I’ve always been adamant that Israel must be able to defend itself. It’s not just critical for Israeli security. I believe it’s critical for America’s security.”

Palestinians “need to end the rocket attacks from Gaza,” Biden also said. “They need to accept once and for all the reality and the right of a secure democratic and Jewish state of Israel in the Middle East.”