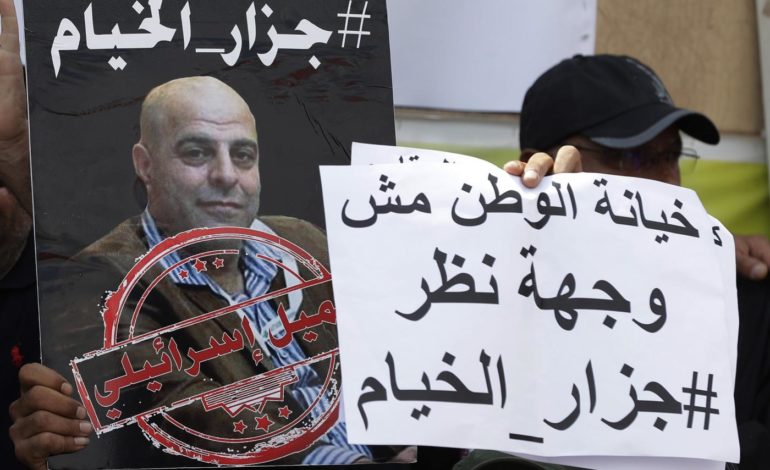 A protester in the southern Lebanese village of Khiam holds a sign that reads, "Betraying the country is not a point of view", September 15, 2019. Photo by AFP/File photo

WASHINGTON/BEIRUT — Lebanese American Amer Fakhoury, who was detained in Lebanon in September, has been released and is on his way back to the U.S., President Trump said on Thursday.

Fakhoury, a 57-year-old New Hampshire resident, was accused of overseeing the torture of Lebanese prisoners at a prison in south Lebanon in the 1980s and 1990s, while part of an Israeli-backed militia during the Israeli occupation, a charge he denies.

Israel occupied southern Lebanon in 1982 and was forced by the Lebanese resistance to withdraw from most occupied Lebanese land in May 2000.

The case prompted U.S. senators Ted Cruz (R-TX) and Jeanne Shaheen (D-N.H.) to introduce a bill that would sanction Lebanese officials involved in detaining U.S. citizens in Lebanon, though the legislation had yet to go up for a vote.

“Fakhoury is on his way back to the United States… He’s battling late-stage cancer,” Trump told a news conference in which he also thanked the Lebanese government.

A Lebanese military court acquitted Fakhoury on Monday, citing the expiry of the statute of limitations, a move that drew criticism from local media and politicians. Other Lebanese judicial authorities later ordered his travel ban and retrial, according to state media.

Fakhoury was detained after returning to Lebanon on September 12, 2019, with a United States passport. He admitted during his interrogation with the Lebanese intelligence service that he was a warden at the Khiam prison.

His questioning was postponed several times due to illness, having undergone chemotherapy treatment after developing stage-4 lymphoma. A crowdfunding campaign was set up for his treatment on behalf of one of his daughters, Zoya Fakhoury.

The ruling, first announced on Monday, drew the ire of former detainees who called the decision “political.”

After Israel’s forced withdrawal in May 2000, Fakhoury fled to the United States via Israel, but only received citizenship last year through one of his children.

He resettled in Dover, New Hampshire, where he ran a restaurant called Little Lebanon To Go.

Ali Atweh, a student from Khiam based in Beirut, said he was disheartened by the decision, considering the “pain and suffering” that the southern Lebanese village endured under the Israeli occupation.

The parliamentary bloc of the Hezbollah movement denounced Fakhoury’s release on Thursday, calling it blatant U.S. interference in Lebanon’s affairs.

“The dignity of all Lebanese has been insulted by this vile political ruling,” it said in a statement.