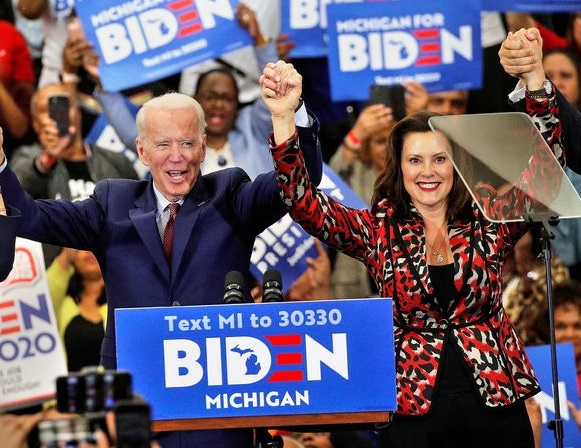 WASHINGTON, D.C. — Former vice president Joe Biden confirmed this week that Michigan Governor Gretchen Whitmer, a fellow Democrat, is one of the women he’s considering as a potential running mate in his bid for the White House.

Biden has already vowed to pick a woman for the position, and said Tuesday night he’s been considering Whitmer for months, but also that he is eyeing as many as 10 potential candidates according to a report from The Hill.

Whitmer has gained nationwide attention over her disagreements with President Trump over the need for medical equipment in Michigan, which has been one of the hardest-hit states so far during the coronavirus epidemic.

Whitmer said a federal shipment of medical equipment for a hospital in Southeast Michigan was barely enough for one shift. Trump took exception to her requests.

“She is a new governor, and it’s not been pleasant,” Trump told news host Sean Hannity. “We’ve had a big problem with the young — a woman governor. You know who I’m talking about — from Michigan. We don’t like to see the complaints.”

Biden has been impressed by Whitmer’s leadership, however.

“She made the list in my mind two months ago,” Biden told MSNBC host Brian Williams. “There’s probably going to be a list, I’m in the process of — Brian, we’ll have it by mid-April, putting together an organization that will run the background checks…by the second or third week in April.

“I’ve thought about some of the women who I believe are ready to be president and I think I can work with and would be willing to work with me. It’s going to be somewhere between six and 10 of them,” Biden added.

Michigan is considered to be a crucial swing state for the election, and Whitmer endorsed Biden before the state’s primary last month, which he won by double digits.

“Facing a dangerous abdication of leadership from Donald Trump during this pandemic, Governor Gretchen Whitmer has been a tenacious fighter for Michigan families,” Biden said in a statement following Whitmer’s requests for medical equipment.