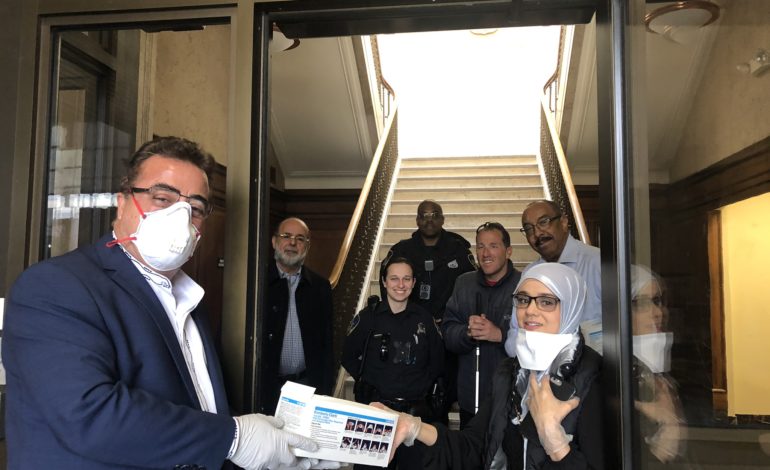 Dr. Mahmud Al-Hadidi, left, holds a box of surgical masks at a donation drop off for a Detroit police station. Besides healthcare workers, MMCC has also made donations of protective equipment and food to law enforcement and first responders. All photos: MMCC.

DETROIT – When Dr. Mahmoud Al-Hadidi, a physician specializing in pulmonary intensive care, noticed there was a drastic need for medical supplies and food for frontline healthcare workers in southeast Michigan fighting the terrible COVID-19 disease, he rose to the challenge.

Hadidi, who practices medicine at a prominent hospital in a Detroit suburb, knew that getting food and protective equipment to medical workers, first responders and even police during the outbreak in the region would require a certain coordination and organization.

“Being on the frontlines myself, as soon as the first few cases were confirmed, I noticed that some of the healthcare providers did not have adequate protection, like N95 masks,” Hadidi told The Arab American News this week. “This problem extended through the staff, whether it be nurses or hospital janitors, who all had to ration these supplies. Dr. Mahmoud Al-Hadidi, a physician and chairman of MMCC, takes a selfie while wearing a face shield during a shift at his Detroit area hospital.

“This tightened up just days after the first reports. Initially, you were able to get a new N95 mask every day. Soon after you had one and you needed to clean it after a few uses. Not everyone had access to them, either. I noticed that this was a major hazard for healthcare providers.”

By late March, the city of Detroit and many of its surrounding communities were becoming hotbeds of infection and hospitals would soon become overwhelmed with patients, putting a unique and unprecedented strain on healthcare providers.

Luckily, Hadidi is also the chairman of the Michigan Muslim Community Council (MMCC), an advocacy and charity organization based out of Royal Oak. Many in southeast Michigan are aware of MMCC’s large scale and collaborative charitable projects. The organization made news last year, coordinating a hugely successful food drive for low income communities throughout the region during Ramadan last year.

The site of local charities, business and civic groups providing relief and honoring the sacrifice doctors, nurses and all other healthcare professionals are making at this time has become commonplace on social media. Hadidi and MMCC’s efforts were at the forefront of this campaign, however, giving evidence to the essential civic service Muslims in Michigan provide for the community at large. Through MMCC, Hadidi was able to secure a shipment of masks for various hospitals.

The site of local charities, business and civic groups providing relief and honoring the sacrifice doctors, nurses and all other healthcare professionals are making at this time has become routine on social media. Hadidi and MMCC’s efforts were at the forefront of this campaign, however, giving evidence to the essential civic service Muslims in Michigan provide for the community at large.

Beyond the shortage of personal protective equipment (PPE), Hadidi knew that the pandemic was creating even more challenges for doctors and nurses.

“Just a few days after the stay-at-home order, the doctor’s lounge in our hospital closed,” Hadidi said. “The other alternative, the employee cafeteria, now had a long line, cutting into important time limits.

“Because nurses, respiratory therapists and doctors in the ICU had to get out of isolation, take off  PPE and then get lunch, this created a real inconvenience. I knew meals had to be provided to these workers so they could stay in the ICU or conference room, have lunch and go back to work.”

MMCC could not use volunteers to bring food to these ICUs, however. Hospitals would soon become hotbeds in and of themselves, and movement in and out of care units had to be restricted. MMCC sought out Damas restaurant in Farmington to wrap meals for individual consumption, which had to be delivered to the outside of the hospital, where they would be picked up by hospital staff. In this way, Hadidi helped get food to ICUs in multiple hospitals across Metro Detroit.

“MMCC used its own funds to carry out these donations,” Hadidi said. “I am happy to see that others have followed and are making a difference supporting healthcare providers at this time.”

MMCC was able to donate PPE and food to Ascension Health Macomb and Rochester, Crittenton Hospital, Henry Ford, Beaumont and Beaumont-Oakwood systems. The initiative began three weeks ago and MMCC plans to continue its service to these systems during this critical time. It is also providing meals to the elderly in shelters, underserved neighborhoods and senior citizen centers.