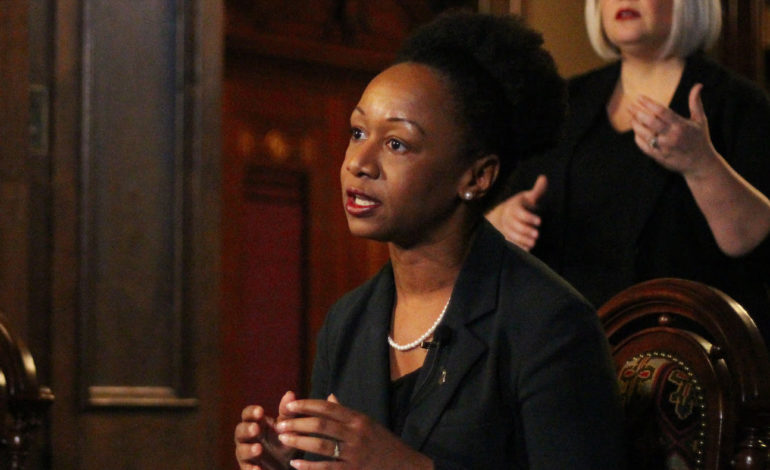 Khaldun also spoke of expansion of testing in the state and finding solutions for low income individuals who may not be able to self-isolate. Photo: Governor’s office

DEARBORN – The Arab American News spoke to Dr. Joneigh Khaldun on Monday morning about the state of COVID-19 in Michigan. Khaldun is the chief medical executive and chief deputy director for health for the Michigan Department of Health and Human Services (MDHHS).

Many in the state may now be familiar with Khaldun, who joins Governor Whitmer during her Monday and Thursday live COVID-19 updates. MDHHS has been expanding its testing capabilities throughout the outbreak. Over the weekend, Lansing announced 13 new testing sites across the state and a private lab in Grand Rapids turning out as many as 3,000 tests a day.

“We’ve worked really hard to expand testing in the state,” Khaldun said over the phone. “I’ve said it many times, as have people across the country, we were behind as a country when it comes to testing capacity and have a real supply chain issue. What we’ve been able to do in Michigan is expand testing capacity significantly. We started this with our state lab and now have private and hospital labs that are able to run this test.”

The state has also been expanding its criteria for testing. This includes critical infrastructure workers — essential employees — which has already begun last week. Khaldun was hesitant to speak too soon about widening this criteria to include everyone, even those people who show no symptoms of the disease, but she said the state may get to that point as well.

Khaldun said she is concerned about the socioeconomic inequities that have put certain communities in Metro Detroit at a heightened risk for the disease. Many in immigrant and low-income communities are not able to self-isolate in separate areas of a home. Khaldun said the topic of finding isolation units for those people was certainly on the table. Wayne County leads in COVID-19 cases and deaths, with Detroit alone reporting around 6,800 cases as of the writing of this article. The ultrastructural morphology exhibited by the 2019 Novel Coronavirus (2019-nCoV), which was identified as the cause of an outbreak of respiratory illness first detected in Wuhan, China, is seen in an illustration released by the Centers for Disease Control and Prevention (CDC).

There is no question that we will not be able to do a 100 percent lifting (of the ‘stay-home’ order) on April 30. It will be a gradual process, and as we get close to that date, we will look at the data to see what happens at that time.

“We have to look at all of our options and consider how practical it is for some parts of society to be able to adhere to CDC guidance when it comes to social distancing,” Khaldun said. “It may not be that easy to self-isolate in a home for some individuals as it is for others.

“(This issue) is on the table. We are certainly looking at building out hotels for workers. It often is a matter of the capacity to be able to do (that kind of a project). I know, for example, of my colleagues that are working with homeless shelters to make sure they have the appropriate isolation units or taking people out of those shelters if they have COVID-19.”

Khaldun said that there is no question that the earlier and longer a city or state implements social distancing measures, the stronger chance those communities have to fight an outbreak. This can be seen in the influenza pandemic in the early 20th century, where cities that implemented longer periods of social distancing measures did not see spikes in cases after those measures were relaxed compared to other cities.

“We are going to be looking very closely at the data for new cases, deaths, how hospital capacity is doing, making sure we have the appropriate testing and contact-tracing infrastructure in place so that can monitor (these factors),” Khaldun said. “But there is no question that we will not be able to do a 100 percent lifting (of the ‘stay-home’ order) on April 30. It will be a gradual process, and as we get close to that date, we will look at the data to see what happens at that time.”