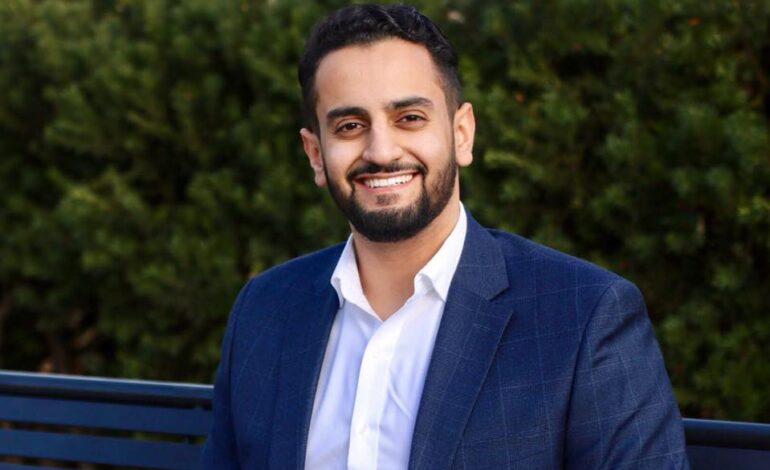 Abraham Aiyash announced his candidacy with a focus on representing working class interests in his district. Photo courtesy: The Aiyash campaign

HAMTRAMCK – Yemeni American community activist Abraham Aiyash officially announced his candidacy for  District Four state representative this week, the seat formerly occupied by the late Isaac Robinson. Robinson, a popular political figure in his district, passed away tragically in March due to a suspected COVID-19 infection.

District Four covers Hamtramck and surrounding Detroit neighborhoods such as New Center, Midtown and parts of the east side. The district has a diverse and growing population of between 70,000 to 80,000 residents (62,706 as of the 2010 Census). Robinson held the seat for little over a year before his death.

A primary election for the seat will take place on August 4. Thirteen candidates have entered their names on the ballot, including Michele Oberholtzer, who lost out to Robinson in 2018 for the same seat, coming in third behind former Hamtramck City Councilman Saad Almasmari. Bengali American Shahab Ahmed is also a contender and had previously run for the District Five seat in 2010. Another community notable running in the August 4 primary is Detroit Public School Board member Tawanna Simpson.

Aiyash has been heavily involved in community politics for some time. Most recently, he could be spotted campaigning energetically for former presidential candidate Bernie Sanders alongside his longtime friend Robinson. Many can remember his rousing speech at Sanders’ rally in south Dearborn. Aiyash also ran in a contested 11-way primary for the District Two State Senate seat in 2018, coming in second behind current Senator Adam Hollier. Aiyash is currently a political director at Michigan United, a non-profit advocacy organization in Detroit. The Arab American News caught up with Aiyash last week, shortly after application deadlines for the August ballot.

“Not to overlook any of the other important parts of the district, but Hamtramck has a unique position in that it’s a space for immigrants to come and settle and oftentimes establish their roots,” Aiyash said of his native town. “It’s a chance to have a reflective democracy in that respect.

“Isaac was someone who was an incredible representative, bringing so many people from so many divides together and balanced that act with such delicacy and tact; he’ll be sorely missed.”

Aiyash said that the question as it stands is “what happens next?” He seems steadfast in continuing Robinson’s work in the district, with a campaign platform that invokes and is reflective of working class sentiments in the district. A recent campaign announcement promises a centering of working people’s interest and a democratic front against greed and corporate abuse, combined with the grassroots and community organizational approach that Robinson was known for.

“The work of fighting for social, economic and environmental justice still has to continue,” Aiyash said. “As a lifelong Hamtramckan, (I can say) there is something special about living in a community my entire life and being able to say that there’s an opportunity to serve, inspire and help change the community for the better.” …it’s important that we have sharp and community oriented representation that won’t sell out to corporate interests and be afraid of corporate pressure. I know, having worked in Lansing, that it’s there, it’s plentiful and intimidating and we need someone who’d be able to stand up to it. — Abraham Aiyash

Recalling his 2018 state senate primary campaign, Aiyash said he ran on a clear message of how to make people trust their government and to engage with it.

“As an elected official, I had hoped that my job would be to help people realize their own agency and to work with them to co-govern a government that they can trust, works for their interests and that moves further that mission of building that perfect union,” Aiyash said.

He said the title of the office he is running for matters less than whether he can be an effective agent for reform for change and justice. Aiyash added that Robinson was an incredible state legislator and community champion and that though there was never any intention to run for his seat, with his passing comes a void of leadership. Michigan has a $56 billion budget and is the 10th largest state in the union. The state government is responsible for many programs and services that affect residents’ day to day life.

“This includes how we deal with auto insurance rates, environmental protections, dealing with education, dealing with the COVID-19 response, employment, housing and criminal justice reform,” Aiyash said. “The state legislature is the lawmaking body that moves forward a lot of these policies and determines how we spend our resources as a state.

“These are things that the state has an authority over and it’s important that we have sharp and community oriented representation that won’t sell out to corporate interests and be afraid of corporate pressure. I know, having worked in Lansing, that it’s there, it’s plentiful and intimidating and we need someone who’d be able to stand up to it.”