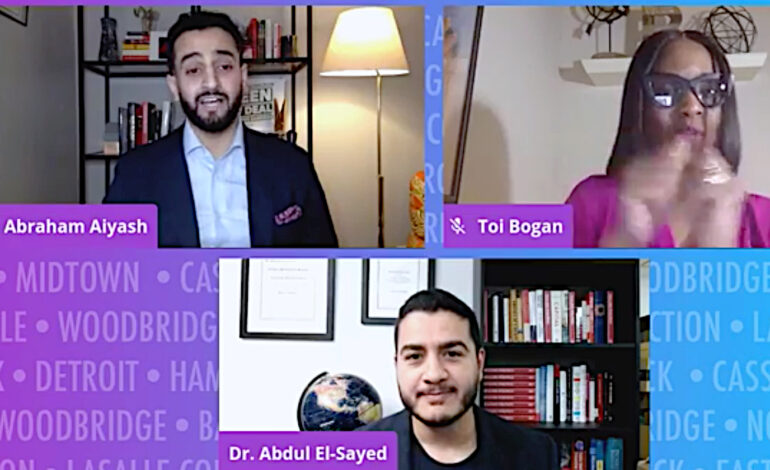 The unique virtual kickoff exhibited the energy and early momentum of Aiyash’s campaign. The campaign said this week that the speakers came united in expressing a clear and resounding message: The untimely passing of State Rep. Isaac Robinson (D-Detroit) was a blow to Michigan and Aiyash was the best candidate to continue Robinson’s fight for the social, economic and environmental justice of working people. Robinson’s father, Roger, has also thrown his support behind Aiyash, a significant endorsement for the Hamtramck native.

(Abraham) recognizes that the only way that we are going to stand with people and for people is if we are willing to stand up against those corporations and speak truth to power. — Dr. Abdul El-Sayed

Hammoud, Hanan Yahya and Fernandez-Sibler all emphasized Aiyash’s history as a grassroots organizer for working people, while Onwenu and Buttry praised Aiyash for understanding the urgency of the environmental crisis plaguing the region. Majewski, El-Sayed and Rahman cited Aiyash’s dedication to the progressive cause and the importance of standing up to massive corporations in order to prevent the exploitation of vulnerable communities. All of the speakers unanimously agreed that Aiyash is the representative that Michigan’s District Four needs during this turbulent time.

Aiyash’s campaign said the candidate plans to continue his efforts to empower individuals by working to expand voting rights, embracing progressive taxation, pushing for a state-level single-payer healthcare system, advocating for environmental justice and helping the state recover from the COVID-19 pandemic.

“There are folks who are saying we have to go back to normal, but the reality is we cannot and we will not go back to normal,” Aiyash said during the livestream, capturing the tone of the evening. “This campaign is about reimagining the possible.”

We're kicking off our campaign! Join us, along with special guests: Dr. Abdul El-Sayed, Rep. Abdullah Hammoud, Justin Onwenu, Mayor Karen Majewski, Rev. Sharon Buttry, Natasha Fernandez-Silber, Kamal Rahman, and Hanan Yahya! You won't want to miss this!Here's how you can support us, too:💰 DONATE https://bit.ly/DonateAiyash 💰💻🏠 Host a Virtual Meet & Greet – invite 7-10 people for a Zoom call with Abraham. Ask him whatever questions you want! Sign up here: https://bit.ly/HalfHourHouseParty😎❄️Become an Aiyash Champion (AC) and stay cool in the summer! We need incredible folks like you to make sure we are engaging your friends and family to vote in the August Primary! Sign up here: https://bit.ly/AiyashChampion