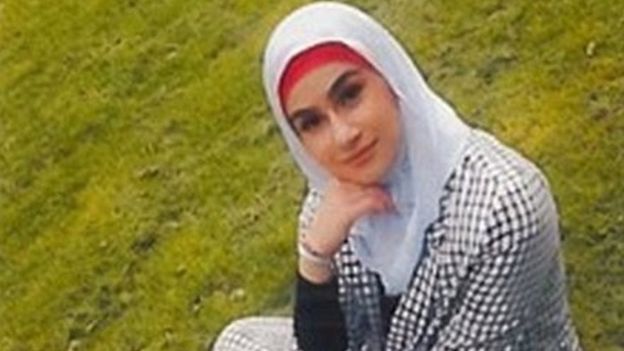 Aya Hachem was described as a "very intelligent young woman" who worked hard to help others. Photo: Family Handout

UNITED KINGDOM — The father of a Lebanese woman who was shot dead in the streets of Blackburn in Lancashire County in the United Kingdom paid tribute to her on Thursday, saying he hoped his family would be safe in the U.K. after they fled Lebanon.

Law student Aya Hachem, 19, was shot from a passing car in a case of mistaken identity, in the town’s King Street on Sunday. Her father, Ismail, told the BBC Asian Network his dreams have been destroyed in the wake of her death.

Eleven total arrests have been made after two more people were detained in connection with the investigation. Eight were arrested on suspicion of murder while another three suspects have been held on suspicion of assisting an offender, according to a report from the BBC.

Police have been given more time to question the first three men, who were arrested on Monday. The suspects, ages 19 to 39, remain in police custody.

Aya Hachem was walking towards the Lidl store at about 15:00 BST when she was hit by one of several shots fired from a car.

According to Chief Constable Terry Woods of the Lancashire Police, the law student was “completely innocent” and was not a target.

Ismail Hachem said he repeatedly tried to call his eldest daughter, who had been living with her family in the U.K. for a decade, after she did not return home from the store.

“My heart is saying go check on Aya,” he told the BBC.

During his search for her, Hachem discovered King Street had been cordoned off. He was unaware that this was the scene of his daughter’s death until police arrived at his home later that day.

“I start crying…cause all my dreams, Aya,” he said. “I think I would be safe here… in this small town. No big problems.”

Aya Hachem, a second year student at the University of Salford, was a young trustee for the Children’s Society.

Her former head teacher had described her as a, “wonderful young lady who had so much to offer.”

“She fled a war-torn zone as a refugee and came to the U.K. looking for a better life,” Diane Atkinson, executive head of Blackburn Central High School, said.

Hachem arrived at the school knowing “very little English” but she “picked it up very quickly.”

She was also known as a “very intelligent young lady” who had “great aspirations to help other people” and “worked incredibly hard to become the very, very best person she could be,” Atkinson said.

A car believed to have been used in the shooting, a Toyota Avensis, was later found abandoned in Wellington Road. Detectives said the shooting was not being treated as a racially-motivated or terrorism-related attack.