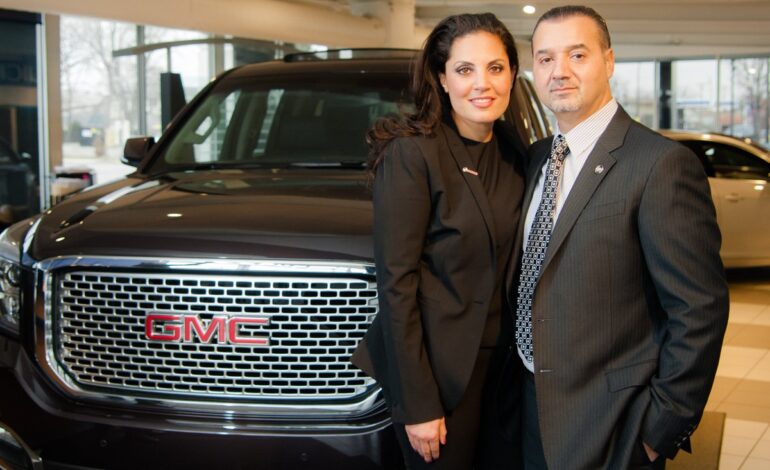 Tanya and Basam Robin, owners of the Superior Buick GMC dealership in Dearborn.

DEARBORN — Tanya and Basam Robin, the Chaldean American owners of the Superior Buick GMC dealership in Dearborn, have a filed a suit against General Motors and GM Financial, accusing the company of unfair and discriminatory practices. The Robins own another dealership under the same name in Battle Creek.

The suit, filed in the the Eastern District Court in Detroit in May, alleges that GM representatives wrongfully made claims that customers at the Robins’ dealership were allowed to take advantage of family discount programs even when they weren’t related to GM employees and retirees. Many of the dealership’s customers are Arab American.

The Robins say these rules caused customers to be profiled and intimidated not to do business with them, which led to their dealerships losing sales. The suit also alleges GM Financial unfairly terminated the dealership’s floorplan agreement, leaving them without financing.

According to the suit, GM and GM Financial commenced an illegal scheme to discriminate against and harm the Robins beginning in February 2019. The Robins purchased 30 yukons at the end of February, manufactured at GM’s Texas plant. The vehicles could not be delivered immediately due to flooding of the Mississippi River. The dealership sold the vehicles to customers, believing that the delay would last only a few days.

The vehicles finally arrived after two months, at which point customers signed sale papers. GM Financial, however, demanded immediate payments for the vehicles and took the position that the Robins were late on their payments, something termed in the auto-industry as being “out of trust.”

GM Financial issued a notice of default in May and imposed higher interest rates and stricter payment requirements. Unable to do business, the Robins sought help from GM. That is when they met with GM executives in Detroit. Two of these execs, Steven Fahner and Philip Lickman, raised concerns about the dealership wrongfully giving out family discounts, saying that Superior sells “too many cars to Arabs with GM’s codes from aunts and uncles” and that these customers could not possibly be related to sponsors that did not have an Arabic last name.

At one point during the meeting, Fahner turned to Lickman and said something to effect of, “If I’m White and you are Black, that is an automatic reason to question whether you qualify for the (discount),” the suit said.

The Robins were given a letter that required their dealerships to obtain birth or marriage certificates and other documents from customers to prove their relationship to the GM employee or retiree. The Robins challenged these “blatant racist” allegations and said that though “deficiencies” as it relates to the program had occurred in the past, the issue had since been corrected and more closely monitored.

The Robins told GM their customers felt targeted due to their national origin and ethnicity, but no response was received. In one incident, a White customer had trouble obtaining a discount sponsored by his Black father-in-law, a 37-year GM employee, for two Buicks. After Superior told him that because of the new rules, he had to prove he was related to his father-in-law, the customer wrote an email to Tanya Robin, which she forwarded to Fahner.

Fahner replied by saying that since the father-in-law was Black, his son-in-law could not possibly be White.

Tanya Robin sought help from the Chaldean American Chamber of Commerce, the Arab American Civil Rights League and ACCESS to reach GM regarding this unfair treatment against her dealerships. GM’s legal department came back with only a “cursory denial.”

The loss in sales from these new rules were real, the Robins claim. GM itself called Tanya Robin to find out why her monthly sales plummeted from 281 new cars in 2018 to just 66 in 2019.

Meanwhile, GM Financial terminated the dealerships’ financing in August. It demanded outstanding payment by October, though the deadline was extended to February. The Robins could not obtain outside lenders, as GM and GM Financial failed to provide evidence that the alleged defaults had been resolved.

In another act of misconduct, GM pulled out of an agreed upon deal to purchase the Robins’ Battle Creek dealership, which had lost revenue after a hailstorm in 2019 damaged all of its inventory.

The Robins are seeking damages to the tune of $10 million, one of their lawyers told Automotive News. GM has denied the allegations of wrongdoings, and says it runs a strong “minority dealer development” program and that it aims to fight the lawsuit and seek relief.