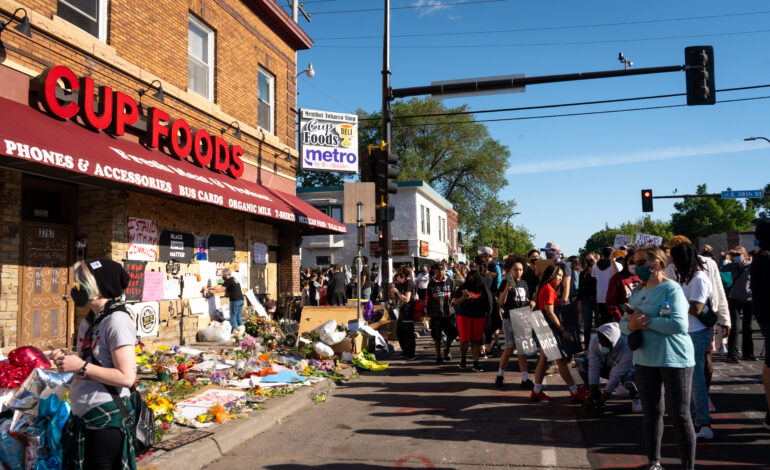 The Minneapolis store in front of which George Floyd was killed by police now acts as a memorial site. All four officers have been charged and the prosecutor's complaint reveals their disregard for Floyd's safety.

Minneapolis — Minnesota Attorney General Keith Ellison announced on Wednesday that he has increased charges for former police officer Derek Chauvin to second degree murder and manslaughter in the death of George Floyd. Charges of aiding and abetting murder were also announced for the three other officers involved, who have also been arrested.

The charging complaint says Chauvin is charged with unintentional second degree murder, carrying a maximum sentence of imprisonment of no more than 40 years. The description of the charge reads that Chauvin, “caused the death of a human being, George Floyd, without intent to effect the death of any person, while committing or attempting to commit a felony offense…”

The original charges against Chauvin were for third degree murder and manslaughter, which still stand. Ellison was brought in after public outcry and demands for justice. He will work alongside the Hennepin County prosecutor. The other officers arrested are Thomas Lane, J. Alexander Kueng and Tou Thao, and can all be seen acting with Chauvin in surveillance footage and the widely-circulated cell phone videos from multiple observers.

The original complaint in the charges against Chauvin set the scene for Floyd’s death. It shows that on May 25, around 8 p.m., Lane and Kueng arrived with their body cams to Cup Foods after an employee called 911 on Floyd for using a counterfeit $20 bill.

Three people were in Floyd’s car, which the two officers approached. At some point Lane pulled his gun out and pointed it at Floyd while he sat in the driver’s seat, but then put his gun back once Floyd put his hands on the wheel. Lane then forced Floyd out of the car and handcuffed him. The complaint says Floyd resisted being handcuffed, but then became compliant and walked over to a sidewalk with the officer. After being told he was being arrested for passing a counterfeit bill, Lane and Kueng walked Floyd to their squad car. Floyd stiffened up and deliberately fell to the ground, telling the officers he was claustrophobic.

By now Chauvin and Thao had arrived in their squad car and the officers tried getting Floyd into the back of the squad car. Floyd refused and said repeatedly that he couldn’t breathe during this time. After more attempts, Chauvin pulled Floyd out of the car completely, at which point he went down to the ground, still handcuffed.

Kueng held Floyd’s back and Lane held his legs. Chauvin then placed his left knee on Floyd’s neck. Floyd said, “I can’t breathe” multiple times and repeatedly said, “Mama” and “please”, but the officers stayed in their positions. A still from an observer’s cell phone video shows Derek Chauvin with his knee on George Floyd’s neck.

The officers reportedly told Floyd, “You are talking fine.” Lane asked, “Should we roll him on his side?” and Chauvin answered, “No, staying put where we got him.” Lane then said, “I am worried about excited delirium or whatever”, to which Chauvin answered, “That’s why we have him on his stomach.” None of the three officers moved from their positions.

Floyd eventually stopped moving, breathing or speaking, according to body cam video. Lane said, “Want to roll him on his side?”, while Kueng checked Floyd’s right wrist for a pulse and said, “I couldn’t find one.” None of the officers moved from their positions. Almost three minutes after Floyd stopped moving, Chauvin removed his knee, which he’d held on Floyd for almost nine minutes total.

An ambulance arrived and took Floyd away. He was pronounced dead at the county medical center. Originally, autopsy findings said Floyd was not strangulated, but that he had underlying health conditions, which combined with police restraint and his potential intoxication, contributed to his death.

An independent autopsy ordered by Floyd’s family disagreed with these findings and said that Floyd’s death resulted from “asphyxiation from sustained pressure.” Both autopsies ruled Floyd’s death a homicide.

The complaint has now been amended to add the new second degree charge and includes this statement:

“Police are trained that this type of restraint with a subject in a prone position is inherently dangerous. Officer Chauvin’s restraint of Mr. Floyd in this manner for a prolonged period was a substantial causal factor in Mr. Floyd losing consciousness, constituting substantial bodily harm and Mr. Floyd’s death as well.”