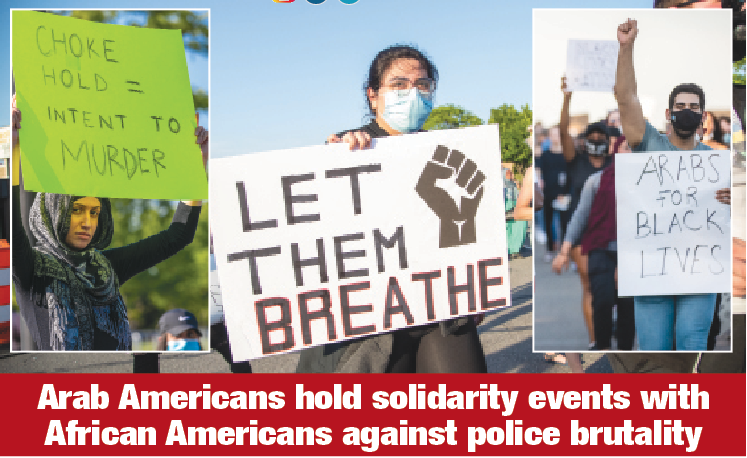 DEARBORN — Arab Americans participated in several actions in solidarity with African Americans and in demonstrations against police brutality across the country. In Metro Detroit alone, prominent Arab Americans joined other communities in condemning the senseless killing of George Floyd at the hands of Minneapolis police officers.

Last Sunday, the Arab American Civil Rights League (ACRL) held a press conference in Dearborn that brought together Arab American and African American organizers in solidarity and condemnation of police departments’ actions in the killings of Floyd, Ahmaud Arbery in Georgia, Breonna Taylor in Kentucky and many others.

“I know all of us have felt the pain of what’s happened,” ACRL founder Nabih Ayad said. “When does it stop? Enough is enough. The global pandemic could not stop the hate of these officers. We stand here united with our brothers and sisters in the African American community.”

We see, as Arab Americans, the parallels between what happens in Palestine and what happens here in America. — Amer Zahr

“We are here today as Arab Americans because we understand a lot of this (history),” Zahr said. “Three days ago in Jerusalem, a man named Iyad Halaq, 32-year-old autistic man, murdered in the streets, 10 shots by Israeli police, because they thought he had a gun.

“He didn’t have a gun. He was just a Palestinian in the wrong place at the wrong time, in his own homeland. We see, as Arab Americans, the parallels between what happens in Palestine and what happens here in America.”

Multi-ethnic and religious participants at rallies and press conferences expressed solidarity with African Americans and stood up against police brutality in all of its forms. A key feature of these events was the discussion of anti-Black racism within Middle Eastern and Arab American populations.

“We as a collective community, whether it’s the Asian community or the Middle Eastern community, have benefited tremendously from the Black freedom struggle,” state rep. candidate Abraham Aiyash told The Arab American News this week. Aiyash was one of the speakers at a rally in Detroit on Friday, where he touched on the importance of rooting out racism at home.

Arab and Muslim Americans also held a press conference on Wednesday, at the Islamic Center of Detroit (ICD). The Council on American-Islamic Relations Michigan Chapter (CAIR-MI) has been televising discussions around the issue of police violence, race and religion on its social media channels.

Protests intensify in Detroit, spring up in Dearborn and other parts

Detroit quickly became a hotbed for protests since last weekend, protests that were largely peaceful yet boisterous. Tensions between protesters and the Detroit Police Department (DPD) became apparent early on, and riot cops made many arrest and dispersed crowds with paper spray and tear gas through the week.

On one occasion, eye witnesses saw police shoot tear gas indiscriminately into an occupied vehicle. Police made arrests using zip ties and loaded protesters into police vans that stood at the ready throughout downtown.

Over the weekend, the city installed an 8 p.m. curfew, which protesters promptly broke on multiple occasions, including Tuesday, when a group splintered off from a bigger rally on Gratiot Avenue. The group remained active past the curfew, in defiance of the city’s orders. More than a hundred of these protesters were quickly arrested after a peaceful standoff.

Taylor was held while police contemplated felony charges of inciting a riot. The charges never solidified and Taylor was let go later in the day. The city eliminated the curfew the same day.

On Wednesday morning, The Arab American News was first to report the arrest and detention of an organizer from the group, Tristan Taylor. Taylor was detained long past when other protesters were let go, while police contemplated felony charges of inciting a riot. The charges never solidified and Taylor was let go later in the day. The city eliminated the curfew the same day.

Dearborn saw its first full-fledged and well-attended protest on Wednesday as well. Attendees heard different speakers at the Dearborn Police Station before walking down Michigan Avenue and Schaefer Road.

Dearborn Police officers took a knee with the protesters at one point, a sight common in other parts of the state and country. Some organizers have dismissed such gestures and have called for defunding and demilitarization.