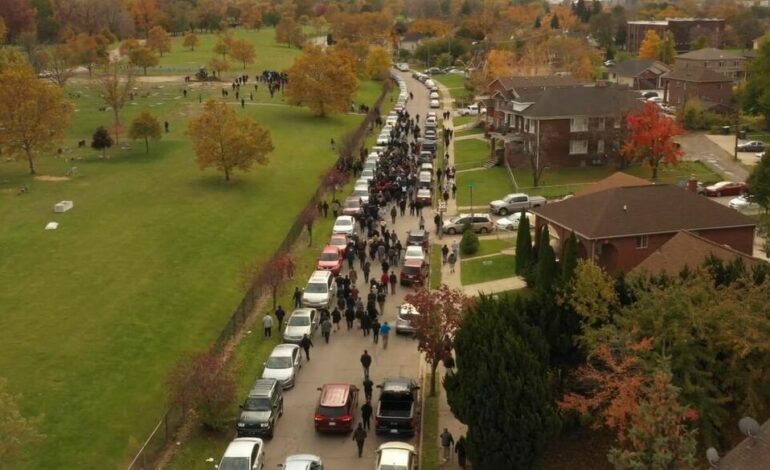 The American Moslem Society has provided burial services for more than 2,000 Muslims at Woodmere Cemetery in the last two decades. Photo courtesy: AMS

DEARBORN — On May 22, the American Moslem Society (AMS) of Dearborn filed a lawsuit  in Wayne County Circuit Court against Woodmere Cemetery for attempting to breach its contract with the mosque. The cemetery is located next to the mosque, on the Detroit side.

AMS has hired attorney Steven Cohen of Farmington Hills to represent it in the case. Cohen said Woodmere committed a gross breach of a valuable grave purchase agreement it entered into with the mosque in 2017. AMS is seeking money damages in the amount of $2 million and wants Woodmere to honor the terms of its contract.

A Muslim American community institution, AMS has purchased graves and burial services at Woodmere for more than two decades. The complaint filed in court says these purchases has generated more than $5 million for Woodmere.

The contract included a payment plan for 60 monthly payments starting in September of 2017. AMS has therefore paid Woodmere almost $390,000 for the purchase of 622 spaces under the 2017 contract.

In April of this year, the mosque wanted to begin using the third section. Demand for graves has no doubt risen in recent months, a tragic reality for many communities in Metro Detroit that have been plagued by COVID-19.

Woodmere had other plans. The complaint says the cemetery informed AMS that it would not let AMS use the section until all 1,000 graves were paid in full. It then justified its actions by adding on pages to the 2017 contract that had neither existed nor been signed by the concerned parties at that time.

AMS’ lawyer said the timing of this move speaks to the cemetery’s knowledge of the increase in demand for graves during the current crisis, putting AMS in an extremely vulnerable position.

Cohen told The Arab American News that the cemetery officials point to a provision in this new, never-before-seen addition to the contract that regulates the transfer of the original contract to someone else, which AMS is simply not doing.

Even this addition says nothing about any requirement to purchase all 1,000 graves in the third cemetery section before utilizing a single grave.

The cemetery now wants AMS to pay off its remaining balance of nearly $240,000 or give up the 2017 contract entirely and then enter into a new one which doubles the price of graves and funeral services.

Cohen said the timing of this move speaks to the cemetery’s knowledge of the increase in demand for graves during the current crisis, putting AMS in an extremely vulnerable position. The cemetery also knows of the tight-knit community that the mosque serves, which puts a high premium on loved ones being buried close to each other and to their mosque.

“It’s unfortunately that the current management of the cemetery is utilizing the desires of the community families to be buried next to their relatives to impose such an increase in the price from the contract they have with the AMS,” a representative from the mosque said.

The cemetery is owned by a company called Midwest Memorial Group, which owns numerous cemeteries in the Midwest. The group is part of an even larger umbrella company, Park Lawn Corporation, which owns cemeteries all across the U.S. and Canada.

Woodmere has until Monday, June 15 to reply to the complaint.