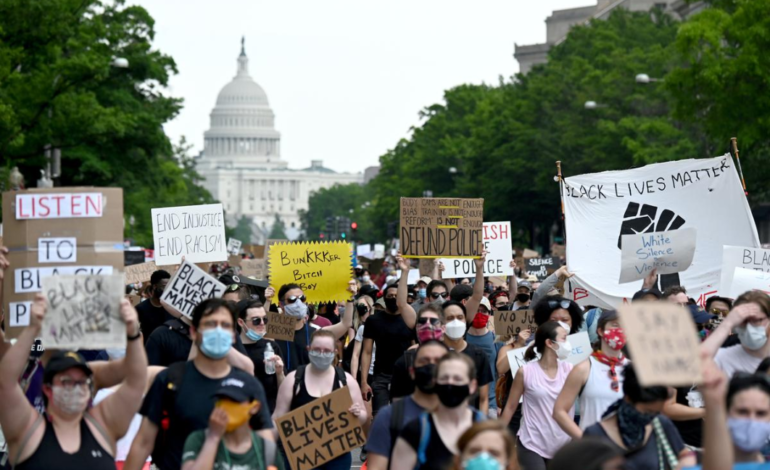 The national survey on June 9-10 shows the public broadly on the side of Democratic lawmakers, who proposed a series of changes to police departments.

NEW YORK — Most Americans, including a majority of President Trump’s Republican Party, support sweeping law enforcement reforms such as a ban on chokeholds and racial profiling after the latest death of an African American while in police custody, according to a Reuters/Ipsos opinion poll released on Thursday.

The national survey, conducted June 9-10, shows the public broadly on the side of Democratic lawmakers, who proposed a series of changes to police departments in the United States as protesters gathered nationwide to condemn the death of George Floyd and racism.

The White House and Republican lawmakers are preparing their own plans for changes in policing, though they are expected to fall short of the deep reforms being sought by Democrats in Congress and Joe Biden, their party’s presumptive presidential nominee in the Nov. 3 election to challenge Trump.

The poll conducted online of 1,113 U.S. adults showed bipartisan support for many of the Democrats’ proposals.

It also found that 89 percent of Americans want to require police to give the people they stop their name, badge number and reason for the stop and 91 percent support allowing independent investigations of police departments that show patterns of misconduct.

Trump, who has been trying to win back suburban voters by positioning himself as a “law-and-order” president, called on states to crack down on the protests. Trump had previously said that he could use military forces if states did not quell protests, which have been mostly peaceful apart from some arson and looting and clashes with officers.

Six out 10 Republicans supported a provision that would allow “victims of police misconduct to sue police departments for damages.”

According to the Reuters/Ipsos poll, rank-and-file Republicans appear to be mostly supportive of the proposals Democratic lawmakers in Congress unveiled on June 8. The legislation followed Floyd’s May 25 death in Minneapolis, where a police officer knelt on his neck for nearly nine minutes.

According to the poll, six out 10 Republicans supported a provision that would allow “victims of police misconduct to sue police departments for damages.”

Seven in 10 Republicans support bans on racial profiling and chokeholds. Nine in 10 Republicans agree that police should wear body cameras and the same proportion agreed that law enforcement agencies should be open to independent investigations.

Trump also has tried to tie Democrats to calls for “defunding the police” by activists on the left. The term refers to eliminating or cutting spending on police departments, often the largest expense for municipalities, and using the funds for education, social welfare, housing and other community needs.

Trump and Biden have both said they oppose “defunding” police departments.

Yet the Reuters/Ipsos poll found that support varies based on how it is defined.

Minneapolis is considering phasing out its police department, but the City Council has not formally discussed how it would do so and what it would replace the department with.

The Reuters/Ipsos poll gathered responses online, in English, across the United States. It gathered responses from 1,113 adults, including 495 Democrats and 417 Republicans, and has a credibility interval, a measure of precision, of plus or minus 3 percentage points.