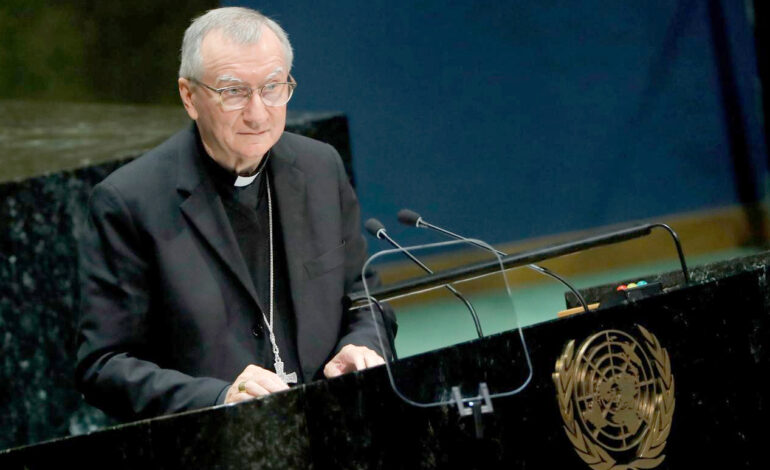 ROME/LONDON/PARIS – The Vatican, in a highly unusual move, summoned both the U.S. and Israeli ambassadors to express the Holy See’s concern about Israel’s moves to extend its sovereignty to Jewish settlements and the Jordan Valley in the occupied West Bank.

The statement said Parolin, the Vatican’s top diplomat, expressed “the concern of the Holy See regarding possible unilateral actions that may further jeopardize the search for peace between Israelis and Palestinians, as well as the delicate situation in the Middle East.”

Israeli leaders decided in May that cabinet and parliamentary deliberations on extending Israeli sovereignty to Jewish settlements and the Jordan Valley in the West Bank, in coordination with Washington, could begin as of July 1.

But with no agreement with Washington yet on the modalities of the move under a peace proposal announced by President Trump in January, and talks with the White House still underway, no cabinet session was scheduled for Wednesday.

The Vatican’s statement reiterated its position in support of a two-state solution, saying, “Israel and the State of Palestine have the right to exist and to live in peace and security, within internationally recognized borders.”

The Vatican appealed to Israelis and Palestinians to do everything possible to reopen the process of direct negotiations on the basis of U.N. resolutions. Britain’s Prime Minister Boris Johnson delivers a speech during his visit to Dudley College of Technology in Dudley, Britain, June 30, 2020.

U.K. PM tells Israel: Do not annex parts of the occupied West Bank

British Prime Minister Boris Johnson cautioned Israel on Wednesday against annexation in the occupied West Bank, saying it would violate international law and harm its drive to improve relations with the Arab world.

“Annexation would represent a violation of international law,” Johnson said in an opinion piece for Yedioth Ahronoth, Israel’s top-selling daily, echoing remarks he made in parliament last month.

“Annexation would put in jeopardy the progress that Israel has made in improving relationships with the Arab and Muslim world,” Johnson wrote, calling for a solution that allows justice and security for both Israelis and Palestinians.

Under the peace blueprint that President Trump announced in January, Israel has said it intends to extend its sovereignty to Jewish settlements and the Jordan Valley in the West Bank, in up to 30 percent of the territory.

Palestinians, who have rejected the Trump proposal, seek to establish a state in the West Bank and Gaza Strip, with East Jerusalem as its capital. Israel captured those areas in a 1967 war and withdrew soldiers and settlers from Gaza in 2005.

Palestinian leaders, the United Nations, European powers and Arab countries have all denounced annexation and consider settlements that Israel has built on occupied land as illegal.

Israel disputes this, citing biblical, historical and political roots in the West Bank.

Johnson, whose maternal great-grandfather was a Moscow-born Jew, said he had once worked in an Israeli kibbutz during his youth. In the opinion piece, he said he has been “a passionate defender of Israel.”

France’s foreign minister said on Wednesday that any Israeli annexation in the occupied West Bank would be in violation of international law and would have consequences.

“Annexation of Palestinian territories, whatever the perimeters, would seriously throw into question the parameters to resolve the conflict,” Jean-Yves Le Drian told a parliamentary hearing.

“An annexation decision could not be left without consequences and we are examining different options at a national level and also in coordination with our main European partners.”

Coronavirus cases are rising in 40 of 50 U.S. states