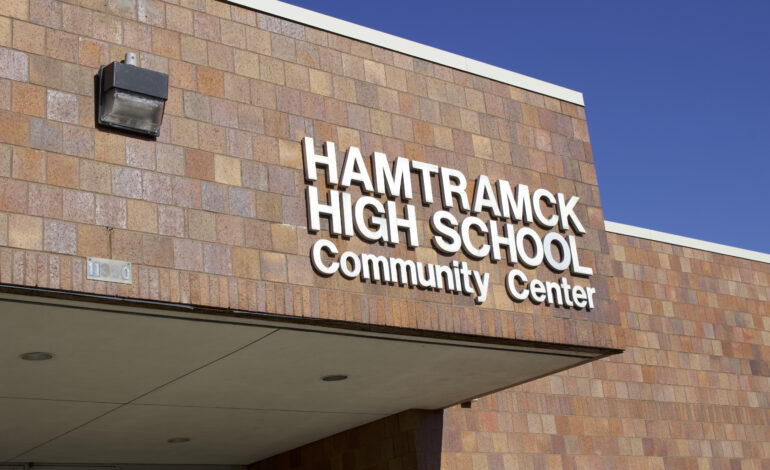 HAMTRAMCK — A school bond proposed by the Hamtramck School District to construct a new elementary school and perform renovation projects has the community divided on the necessity of a tax increase to pay for school infrastructure.

If voters approve the 30-year bond, on the ballot in the August 4 election, the property tax rate in the city will increase by 7 mills and the Hamtramck School District will borrow $35,265,000 from a special low interest fund set up by the state. The money is is borrowable by districts that want to bridge funding gaps in bond initiatives.

The bond proposal has garnered both support and criticism from people in Hamtramck, echoing reactions to similar proposals in neighboring communities in the past. The COVID-19 crisis has added another dimension to the debate and to the city and school district’s financial future. The bond proposal was set for the May 5 election, but was subsequently postponed to the August 4 primary due to the pandemic.

To complicate matters even further, the city is seeking a 10 mills, 20-year bond to fund, in part, its police and fire pensions. That proposal is on the ballot in November.

Much of the debate over the bond proposals is being carried out online, with the school district setting up its own informational website and two other prominent websites being set up by opponents. One of these is translated into Arabic and Bengali and is against both proposals.

Another website is maintained and updated by the district’s middle school vice principal and her husband, a former Hamtramck police officer. That website argues against the school bond, while advocating for the city police/fire millage.

The district has said the primary reason it’s asking residents to vote yes on the bond is so that it can have enough capital to construct a new elementary school building, install air-conditioning in buildings and renovate school facilities like restrooms. The bond cannot be used towards employee salaries.

It also wants to be more active about maintenance to cut down costs and wants to expand the space at the community center, which will service all residents. The district comprises eight mostly aging buildings, some 3,500 students and more than 400 staff.

Hamtramck School Board President Evan Major told The Arab American News that since the state does not provide school infrastructure funding in Michigan, districts have to make the tough but necessary choice to ask residents for a dedicated millage to ensure a safe and modern educational environment for students.

“It’s unfair, but this is the reality of how school districts are expected to finance infrastructure improvements in our state,” Major said. “There is no central infrastructure bank for districts and no allocation from the state included in the per-pupil allocation.

“It was baked into Proposal A that this is one of the revenue generation mechanisms that would be left for schools; and it is of course easier for school districts in higher income communities to do this and which they do, frequently.”

Major said districts that people sometimes leave for have had multiple bonds to support their learning environments. He said Hamtramck students are at a structural disadvantage because the state has left the district and residents to come up with funding solutions themselves. Opponents of the bond have pointed to several factors to raise the issue that the proposed bond is unnecessary. The school district recently reported a surplus in its $11 million plus general fund.

“We are asking for $35 million for these (necessary) projects,” Major said. “It would be incredibly poor governance to empty the general fund for infrastructure improvements in a political climate where the state is slashing money from school budgets because of pandemic recovery.”

Major said the surplus came out of shrewd budgeting. He also said the school board recently approved a budget for next year that doesn’t involve cutting programs, making bigger class sizes or losing employees because the district has the necessary funds to tap into.

“We were smart budgeters,” he said,  “and now that the state has come calling and has told us of budget cuts, with estimates being somewhere in the neighborhood of $700 per pupil, we have the reserves to cover that, so that our kids don’t experience a worse quality of education.”

The general fund is not enough to cover projects like installing air conditioning, which alone would cost $6 million, let alone the cost to construct a new elementary school, Major said.

No kid should go to school on the third floor of a building on a 90 degree day without air conditioning. No kid should have to bundle up in all their winter gear simply to leave their portable classroom and go into the main building. — HPS Board President Evan Major

Right now, a conjoined campus of Dickinson West Elementary and Kosciuszko Middle School serves both elementary and middle school students, with added portable classrooms that were purchased, used and meant to be temporary. The proposed new three-story, 37,000 square feet elementary building is one of the major projects the school bond would fund.

“The imperative for the projects isn’t just financial,” Major said. “It’s a moral imperative. No kid should go to school on the third floor of a building on a 90 degree day without air conditioning. No kid should have to bundle up in all their winter gear simply to leave their portable classroom and go into the main building. No student should have to try and focus on their academics while being hit by a cold draft through their classroom window. No kid should go to a school without the most secure entries and exits.”

Opponents point to three past Hamtramck millages and funding initiatives and said those should be enough to meet the district’s current needs. Major said one of those is a baseline standard operating millage that any district is required to have to service students in Michigan. The second is a sinking fund for infrastructure of 3.9205 mills, which generates about $700,000 in revenue. That sinking fund has been used towards roof and window repairs for schools. A third recreation millage of 4.3105 mills generates $800,000 and can only be used for recreational services that anyone in Hamtramck can utilize.

A tale of two opposition groups

Nasr Hussain, a Hamtramck businessman, is part of a group called Hamtramck Citizens Against Taxation. The group operates a website that is against both the school and city millage proposals. Hussain said revenue generated by the three past millages should be enough for school repairs.

“The city is already getting around $3 million from its citizens for repairs to its schools,” Hussain said. “We think that this should be enough for any repairs. The district’s budget surplus is another reason we oppose the school bond.

“The elementary school used to be in a building owned by a church and because of declining enrollment, the district had to let it go. Now they are asking for millions to build a new school.”

Hussain said there is no indication when students will be able to get back normal instruction and said the district should wait for the fog of the pandemic to clear up and reassess the situation.

He said the district simply did not do enough to reach out to the community. Major has said the district had the bond proposal in the works for a long time and has invited the public to discuss it many times. The group’s own site talks about one such meeting at a local mosque.

Public safety is a top concern for voters and something the city cannot gamble with. Many photos on the district’s bond website are misleading and the district is looking for an expensive bond to do mainly cosmetic repairs to its facilities. — David Adamczyk

Hussain also said that putting the bond on a low-voter-turnout special election day was underhanded. The group’s website has more information on its platform: https://hamtramcktaxes.com/

Hussain said the city has mismanaged its budget and should not be asking for a 10 mill tax increase to fund its police and fire pension. This is where his group differs from another group rallying against the school bond.

David Adamczyk, a former Hamtramck police officer and investigator, said public safety is a top concern for voters and something the city cannot gamble with. He said many of the photos on the district’s bond website are misleading and that the district is looking for an expensive bond to do mainly cosmetic repairs to its facilities.

“Is it worthwhile right now to put forth a cosmetic bond?” Adamczyk said. “There have been several times when law enforcement has been needed at Hamtramck Public Schools. They cannot afford to risk having calls go to Detroit. The response time and public safety risks would be astronomical.”

Adamczyk said warped floorboards featured on the bond website had already been repaired and that the bathroom facilities showing spit-wads, or rolled up wet toilet paper, on the ceiling showed routine maintenance needs. The floorboard photos were taken down by the district after The Arab American News made an inquiry, with the district saying the website simply needed to be updated. Adamczyk also said the district has not compensated for increased construction costs due to the pandemic in its budget projection for major projects. He, like Hussain, thinks uncertainties about capacity and instructional needs in light of the COVID-19 pandemic shows the district needs to step back and reevaluate before asking taxpayers to take on the costs of major projects.

For major projects, Adamczyk said the district could have saved money by eliminating busing, which it didn’t have years ago.

“Some of the schools haven’t had air conditioning for 100 years, why the need today?” he asked.

Adamczyk’s wife, Christina, is Kosciuszko’s vice principal, her own former middle school, and has deep roots in Hamtramck. Christina’s father was the city’s fire chief and her brother retired from the fire department. The husband and wife operate their school bond opposition website: https://votenohamtramck.com