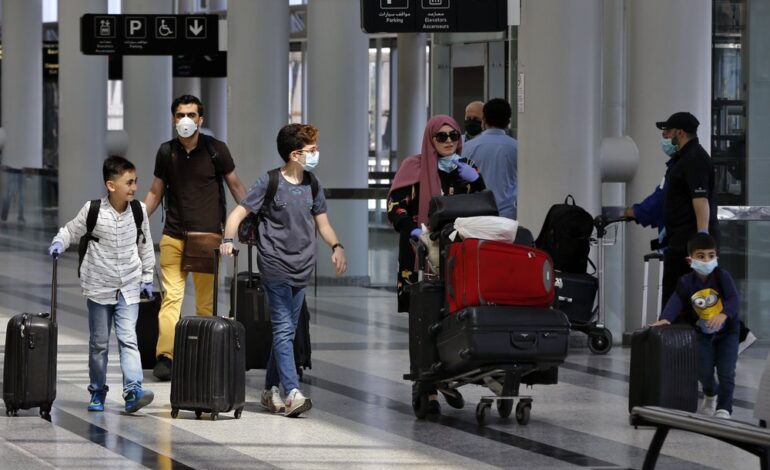 Travelers push their luggage at the departure terminal of the Rafik Hariri International Airport in Beirut, Lebanon, Wednesday, July 1. Beirut's airport partially reopened after a three-month shutdown and Lebanon's cash-strapped government is hoping that thousands of Lebanese expatriates will return for the summer, injecting dollars into the country's sinking economy. Photo:Bilal Hussein/AP
BEIRUT – Lebanon’s financial adviser Lazard will see if a government financial rescue plan can be adjusted to reach a compromise workable for the International Monetary Fund, two sources said on Friday, after the plan hit resistance from politicians, banks and the central bank.

The plan, which anticipates vast losses in the financial system, has been undermined by objections from Lebanon’s ruling elite, obstructing the country’s talks with the IMF aimed at rescuing the country from a financial meltdown.

Prime Minister Hassan Diab’s government had approved the plan, which would lead to losses of 241 trillion Lebanese pounds in the financial system, or $68.9 billion at the exchange rate applied by the plan, as the basis for talks with the IMF.

The IMF said the losses appeared to be about the right order of magnitude.

But a parliamentary fact-finding committee, backed by all Lebanon’s main parties, objected to the approach taken in the plan. Applying different assumptions, it came up with losses between a quarter and half that amount.

The second source said the aim of the Lazard visit is “how we can try to adjust the government plan to see if we can come up with something workable for the IMF and for the Lebanese counterparts”.

The IMF warned Lebanon on Monday that attempts to lower losses from the financial crisis could only delay recovery.