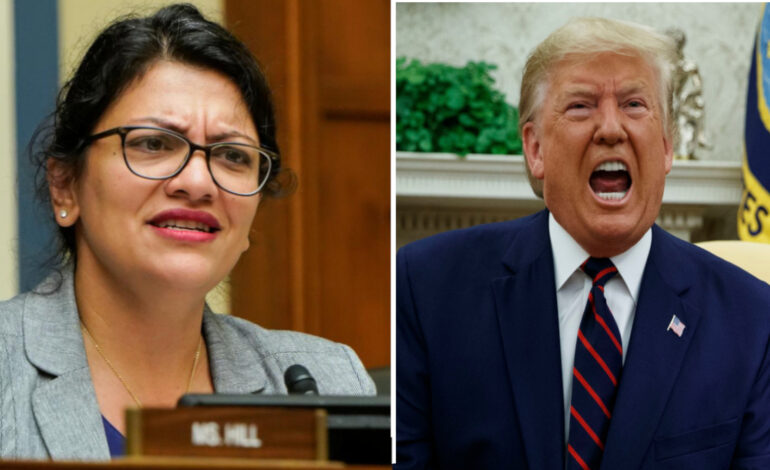 The warning came Monday as Trump spoke to reporters inside the White House about protests in major cities across the U.S., where, according to Trump, local law enforcement is limited in their response to the months-long civil unrest triggered by the police killing of George Floyd in Minneapolis.

Trump praised the actions of unidentified federal agents in Portland, who raised nation-wide criticism for assaulting and detaining protesters in unmarked cars without explanation in the last three days. Now, Trump is looking for a similar strategy in other cities, where he says extreme “left” groups have taken over and turned protests violent.

“The police are afraid to do anything,” Trump said. “We’re not gonna let (this happen in) New York, Chicago, Philadelphia, Detroit and Baltimore.”

Trump criticized “liberal Democrats” running those cities for not doing enough to crack down on protests, many of which, especial in Detroit, have been largely peaceful.

“They’ll have to arrest me first if they think they’re going to illegally lay their hands on my residents,” tweeted U.S. Rep. Rashida Tlaib (D-Detroit) in response to Trump’s comments.

They'll have to arrest me first if they think they're going to illegally lay their hands on my residents. https://t.co/CkGheyGYq8

Governor Whitmer, who has been one of the state officials Trump has previously attacked for her handling of the COVID-19 crisis in Michigan, denounced Trump’s comments as “hateful rhetoric.”

“It is deeply disturbing that President Trump is once again choosing to spread hateful rhetoric and attempting to suppress the voices of those he doesn’t agree with,” Whitmer said. “Quite frankly, the president doesn’t know the first thing about Detroit.

“If he did, he would know that for nearly two months now, Detroiters have gathered to peacefully protest the systemic racism and discrimination that Black Americans face every day. There is no reason for the president to send federal troops into a city where people are demanding change peacefully and respectfully. If the president actually wants to help the people of Michigan, he can start by picking up the phone and telling Mitch McConnell to pass the HEROES Act, so we can provide immediate relief to Michigan’s families, schools and small businesses.”

“President Trump’s politically motivated threat to send ‘more federal law enforcement’ to Detroit, among other cities, has nothing to do with protecting public health or safety,” Nessel said. “It is about using the power of his office as a cudgel to punish those who use their constitutionally guaranteed rights to express views he disagrees with.

“Such threats undermine peace and stability in our communities by unnecessarily escalating tensions and encroaching on states’ rights. We are a nation of laws and the president’s attempts to intimidate our communities with threats of violence could not be more un-American.”

Protests in Detroit have large been peaceful, though a few incidences of police clashing with protests have emerged in the last few weeks. Detroit Police Chief James Craig and Mayor Duggan previously acquiesced to protesters’ demands to end a mandatory curfew in the city at the height of the protests.

“Detroit is one of the few large cities in the country that has experienced no fires, no stores looted and never requested the National Guard during the protests,” a Duggan spokesperson said of Trump’s comments. “Not sure where the president is getting his information.”