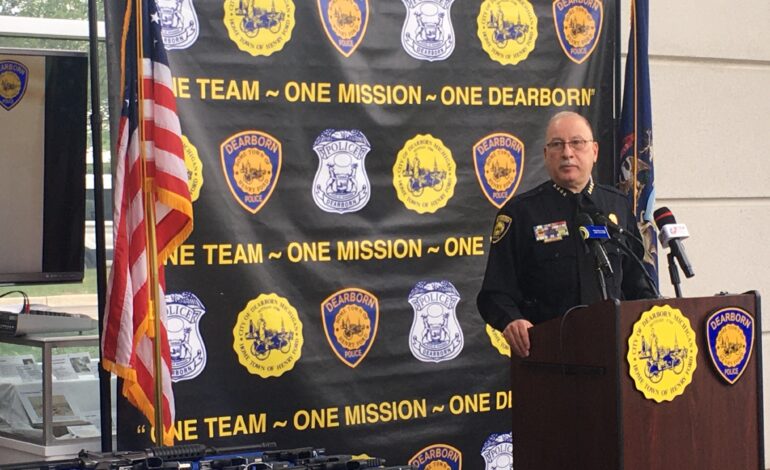 DEARBORN — In the six weeks between June 1 and July 17, police say they have seen a 130 percent increase in firearm-related offenses.

During a news conference on Tuesday, the Dearborn Police Department acknowledged a spike in gun crimes in the city, as well as a recent fatal shooting.

Even so, crimes involving firearms increased nearly 25 percent in the first half of the year, in contrast to the more recent 130 percent increase.

Chief Ron Haddad said there have been 106 crimes with guns this year. Dearborn police have confiscated many firearms.

Dearborn police have arrested two people in connection with a shooting that resulted in one fatality and another injury.

On July 16, at approximately 10:15 p.m., police responded to a call of a shooting on the 7900 block of Chase. A 19-year-old Detroit resident suffered a fatal gunshot wound and a 31-year-old man from Detroit was transported to the hospital with a non-fatal gunshot wound.

The police identified the suspects within 14 hours of the shooting. Timothy Paul Bennett, 34, of Inkster and Stephen Jerome Pruitt, 46, of Detroit have been charged by the Wayne County Prosecutor’s Office with homicide — first degree, assault with intent to murder, felony firearm and felon in possession of a firearm. Timothy Paul Bennett, 34, of Inkster and Stephen Jerome Pruitt, 46, of Detroit are charged in a recent fatal shooting in Dearborn – Photos courtesy of the Dearborn Police Department

Both suspects have been arraigned and remanded to the Wayne County Jail. A probable cause conference was set for July 31, where they will appear.

The Dearborn Police Department also provided surveillance photos of two individuals and is asking for the public’s assistance in identifying them. Although all perpetrators involved are in custody, police believe these individuals could provide pertinent information to assist with the investigation as well as what happened during the incident.