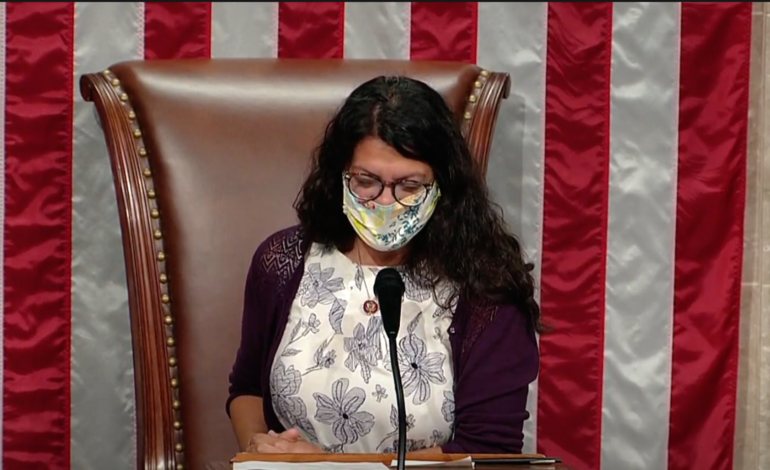 WASHINGTON, D.C. — On Wednesday, the U.S. House of Representatives voted to pass the NO BAN Act, a bill that will effectively repeal the Trump Administration’s discriminatory ban against Muslims, Africans, refugees and asylees.

The final vote tally was 233-183. U.S. Rep. Debbie Dingell (D-Dearborn) presided over the debate of the bill on the House floor, while U.S. Rep. Rashida Tlaib (D-Detroit) presided over its final passage.

Shortly before the vote on Wednesday, Dingell and Tlaib held a press conference over Zoom on the historic legislation spearheaded by the congresswomen, which seeks to repeal the Trump Administration’s Muslim Travel Ban and prevent any future bans.

The legislation stands against the travel ban first initiated by the Trump administration in 2017 in the form of an executive order that banned foreign nationals from seven predominantly Muslim countries from visiting the country for 90 days, suspended entry to the country of all Syrian refugees indefinitely and prohibited any other refugees from coming into the country for 120 days.

The ban garnered international outcry and legal actions from the American Civil Liberties Union other organizations and even a federal court in Washington state. The Trump administration has modified the ban over time, but those organizations have maintained that the spirit and function of the ban remained discriminatory.

“This is something that has traumatized our communities,” Dingell said. “I was very honored to sit for the debate as so many of my colleagues got up to talk about why this is wrong.”

Dingell said the ban targets people because of their religion. Her district is home to the largest concentration of Arab Americans in the country, many of whom have been directly affected by the Muslim Ban.

“Many of their families are still in Yemen or Lebanon or Syria and multiple other countries in the Middle East,” Dingell said. “They are our doctors, nurses, teachers, pharmacists; they are the glue of our community.”

Dingell said attacking fundamental rights to religion, free speech and due process was a threat to national security. She said on the House floor that one of the worst incidents of terrorism in the U.S. was born not out of the Arab community, but by men of the Michigan Militia who were responsible for the 1995 Oklahoma City bombing. This is the most significant civil rights bill for Muslim Americans in our country. It’s a very historic moment in our time here in Congress — U.S. Rep. Rashida Tlaib (D-Detroit)

“We’re going to outwork the hate,” Tlaib said. “Congresswoman Dingell and I know there are more people in our country that are for love and acceptance and bringing people together to say no one should be discriminated against based on their ethnicity, faith, color of their skin or their sexual orientation.”

A majority of the Democratic caucus had already co-sponsored the repeal bill before it went out for a vote. The bill is not likely to become law, however, as it has little chance of being brought up for a vote in the Republican-controlled Senate, let alone be passed.

“I’m going to proudly oversee a historic moment today,” Tlaib said. “This is the most significant civil rights bill for Muslim Americans in our country. It’s a very historic moment in our time here in Congress.”

Above: Watch the U.S. House of Representative vote on the NO BAN ACT legislation on Wednesday, July 22.