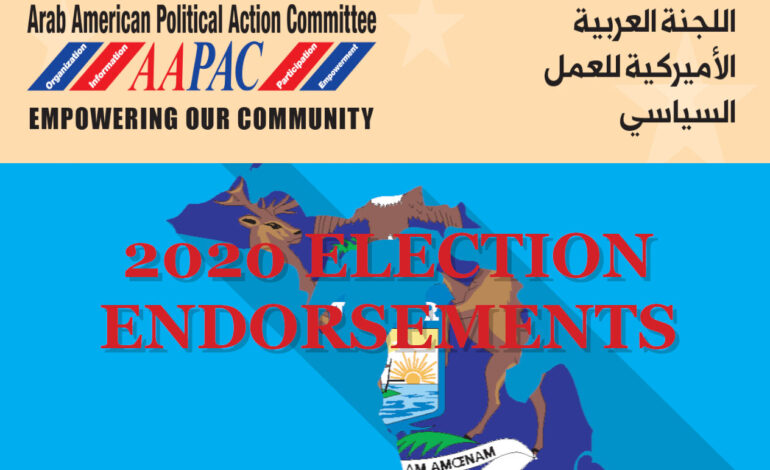 DEARBORN — The Arab American Political Action Committee (AAPAC) is endorsing a number of candidates in state and municipal elections for the August primary elections.

Since 1998, AAPAC has organized Arab Americans to encourage political activity and participation. The organization maintains a thorough endorsement process for candidates, many of whom have done important work in their communities and have become mainstays in the American political fabric.

AAPAC President Mona Fadlallah said this year the endorsement process resulted in deciding on those individuals who exhibited candor, impartiality and intellect, as well as the requisite compassion for the communities they serve or seek to serve in.

“AAPAC members searched for individuals who are not only leaders in their own right and ready to promote justice, but also have a proven track record for putting people first, not politics,” Fadlallah said. “Several candidates discussed the necessity of diversity and the importance of invigorating their district and the state of Michigan. “They also spoke of promoting the implementation or expansion of initiatives that assist the disadvantaged or others deserving a second chance to better their lives. Moreover, the endorsed candidates’ profound sense of humility and resoluteness to fulfill their official duties, with consideration for all its citizens, truly resonated with our members.”

McCormack joined the Michigan Supreme Court in January 2013 and became chief justice in January 2019. She has promoted statewide initiatives to make courts independent, accessible and engaged with their communities.

The West Michigan attorney has a long history of public service, including serving as vice president of the East Grand Rapids Public Schools Board of Education. Included in her platform are safer and fair working conditions, equity in education and protecting our natural resources.

A former communications director for the city of Detroit, Cherrin once ran for state representative while he was a senior at the University of Michigan at the tender age of 21. Since then he has had a long career in public relations.

The former Ferndale mayor took the highest seat in the state’s wealthiest county during a tumultuous time, following the passing of longtime Republican Oakland County Executive L. Brooks Patterson. Coulter recently had to see his county through the COVID-19 pandemic as one the state’s epicenters for the virus. Commissioner Sam Baydoun has called Dearborn and Wayne County home for the last 40‭ ‬years‭. ‬In his capacity as a Wayne County Commissioner‭, ‬he serves on the committees on public services‭, ‬economic development‭, ‬ways and means‭, ‬public safety‭, ‬judiciary and homeland security‭, ‬and the special committee on senior citizens and veterans affairs‭. ‬
Baydoun looks forward to working with the rest of his colleagues on the commission to move Wayne County forward‭.‬

Running for a well-contested seat in a district that includes Hamtramck and some Detroit neighborhoods, the Yemeni American has clenched the endorsement of Bernie Sanders and other progressive-leaning Democrats. The office was left vacant after the untimely passing of popular State Rep. Isaac Robinson.