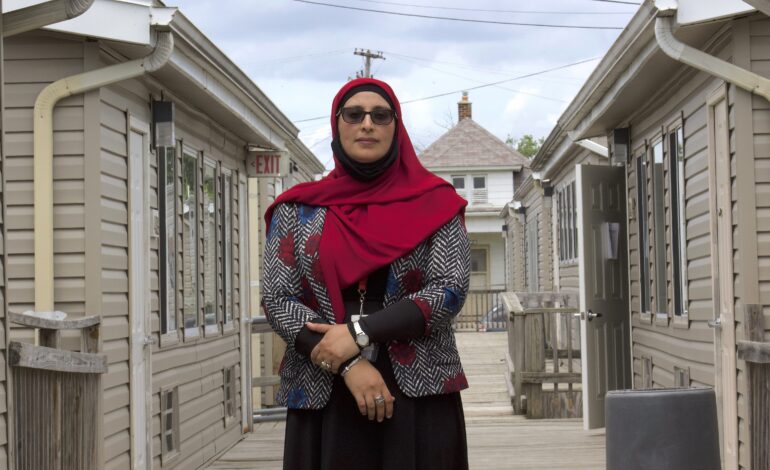 The Hamtramck School District is asking voters to approve a millage on Aug. 4 that would secure $35 million for funding schools' construction, upgrading and maintenance. Photo by Hassan Abbas/The Arab American News

HAMTRAMCK — Residents of Hamtramck have a big decision to make about the future of public education for its families. Voters will decide on Aug. 4 whether securing a low-interest $35,265,000, 30-year bond for new construction and maintaining the needs of the Hamtramck Public School District (HPS) is worth the seven mill tax increase.

The seven mills would be tacked on to the existing 57 total mills (as of the 2020 summer tax period) on residential properties. Previous millages, and an already existing 18 mill standard school operating millage on commercial properties that is albeit not unique to Hamtramck, have had some business owners and residents organizing against the bond.

HPS Superintendent Jaleelah Ahmed has been busy informing the public about what kind of projects the bond would help fund. The biggest project would be the construction of a new three-story elementary building that would replace portable classrooms used by the students of Dickinson West Elementary School.

Ahmed spoke to The Arab American News about these needs. These include removal of the 10 portable classrooms that house 250 students on the conjoined Dickinson West Elementary and Kosciuszko Middle School campus.

“We’re looking to construct a new building that will be 37,000 square feet,” Ahmed said. “This elementary school building will include new furnishings and new technology.”

The portables were intended to be temporary when they were installed many years ago. The classrooms can be seen on Burger Street, surrounding by a cage-like fence, with children walking back and forth from them to the main building in rain or snow. Ahmed said this is not a fair and equitable learning environment for children.

The district’s modernizing proposal includes work on aging restrooms. HPS’ Holbrook Elementary School, constructed in 1896, is one of the oldest elementary school buildings in Michigan.

“Hamtramck has never passed a bond like surrounding cities,” Ahmed said. “We attempted unsuccessfully to pass a bond in 1997. We’re really reaching out to the community to promote this one.”

Unfortunately, Michigan is one of 12 states where the state government does not supply districts with funding to make building repairs, leaving it up to districts to bring such proposals to taxpayers, with varying degrees of success and failure.

The bond has raised concerns among the Yemeni community in Hamtramck, many of whom own businesses and properties, about whether the millage increase is sustainable during a pandemic. An opposition group led by business owner Nasr Hussain is campaigning against both the school bond and a city millage that looks to fund, in part, police and fire department pensions.

“Anytime you ask taxpayers for money, it’s a sensitive and emotional topic,” Ahmed said. “It’s not something everyone will welcome with open arms. We’re in a democratic system and everyone is entitled to their opinion.” We don’t make decisions based on just jotting down (random) numbers; we have experts in each field that have been involved in this very intensive proposal process — HPS Superintendent Jaleelah Ahmed

For the average owner-occupied home, which constitutes half of the housing market in Hamtramck according to the U.S. Census Bureau, the millage increase would mean an extra $200 to $250 a year, or $4 per week.

The district has enlisted Michael Malone form PARTNERS in Architecture, PLC, to oversee the construction proposal. Opponents have said the district hasn’t done enough to compensate for varying construction costs associated with the COVID-19 pandemic.

“Malone comes with an abundance of knowledge, experience and certifications,” Ahmed said. “I’d rather count on him, an expert, for this project. We don’t make decisions based on just jotting down (random) numbers; we have experts in each field that have been involved in this very intensive proposal process.” Ahmed said the district is not planning on bringing students back for in-person learning this fall. This provides an even better opportunity to carry out the proposed construction and updates while not disrupting students’ education. A new ventilation system will go further in protecting students’ and staffs’ respiratory health.

For more on the bond, visit the HPS bond informational website: www.hamtramckfuture.com