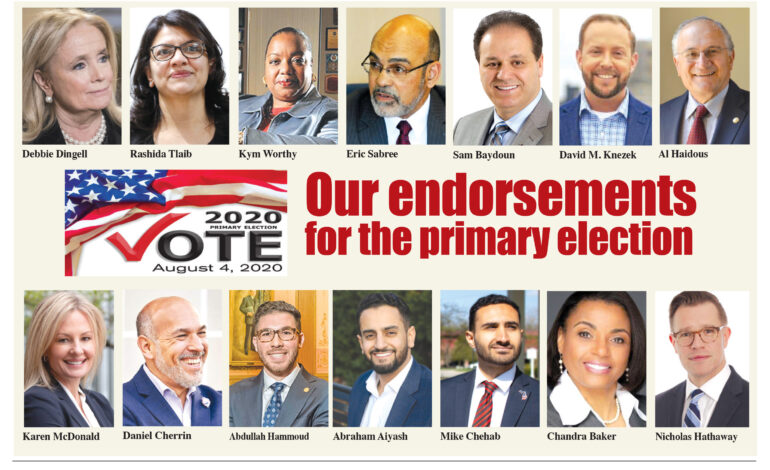 It is time once again for our election endorsements. There are many important seats and issues at stake on August 4. We present below what we feel are the most qualified candidates and one important non-partisan ballot proposal in a city near and dear to us.

Readers might notice that our endorsement list matches, with some exceptions, that of the Arab American Political Action Committee’s (AAPAC) 2020 election endorsements. That is because we believe in both the research and the vetting process that AAPAC has undertaken for decades in endorsing qualified candidates and important issues. The Arab American News believes in the power of voter mobilization and direct civic engagement, especially among strong ethnic and minority communities like ours.

Our community has made tremendous strides and put forth our issues, concerns, fears and hopes on the mainstream political landscape of this great nation. We urge you to get out there and vote, hopefully for these candidates and one proposal, to ensure this work of protecting our communities continues.

Commissioner Sam Baydoun has called Dearborn and Wayne County home for the last 40‭ ‬years‭. ‬In his capacity as a Wayne County commissioner‭ ‬he serves on the committees on public services‭, ‬economic development‭, ‬ways and means‭, ‬public safety‭, ‬judiciary and homeland security‭, ‬and the special committee on senior citizens and veterans affairs‭. ‬
Baydoun looks forward to working with the rest of his colleagues on the commission to move Wayne County forward‭.‬ Al Haidous chairs the Committee on Economic Development and serves on the Committee on Public Services as well as being the commission’s representative to the Wayne County Airport Authority. He is also a member of the Special Committee on Senior Citizens and Veterans Affairs.

Haidous was first elected in November 2014 to represent the Wayne County Commission’s 11th District, which covers the cities of Belleville, Romulus and Wayne; Huron, Sumpter and Van Buren townships and part of the city of Westland. Haidous had served previously as mayor of the city of Wayne from 2001 through 2014.

Running for a well-contested seat in a district that includes Hamtramck and some Detroit neighborhoods, the Yemeni American has obtained the endorsement of Bernie Sanders and other progressive-leaning Democrats. The office was left vacant after the untimely passing of popular State Rep. Isaac Robinson.

Aiyash looks to center working people’s interest and a democratic front against greed and corporate abuse, combined with the grassroots and community organizational approach that Robinson was known for.

A former communications director for the city of Detroit, Cherrin once ran for state representative while he was a 21-year-old senior at the University of Michigan. Since then he has had a long career in public relations. Residents of Hamtramck will decide on a school bond proposal that will levy seven mills to secure a low-interest $35,265,000, 30-year bond for new construction and maintenance. The primary objective is the construction of a new, three-story elementary school that will replace portable classrooms used by hundreds of students outside the conjoined campus of Dickinson West Elementary and Kosciuszko Middle schools.

We know that this bond has created a rift in the community in Hamtramck and within its strong and vibrant Yemeni American population. While we recognize that higher taxes are a genuine area of concern for families and businesses, we think that this bond proposal, and the resulting benefits to Hamtramck schools, will truly work towards the greater benefit of that community.

A strong school system, with proper classrooms, temperature and ventilation systems, bathroom facilities and modernized education ensure these long-term benefits. Education is, of course, paramount for the intellectual and economic growth of our children. But if that’s not enough, consider this: Better school districts have shown time and time again to not only increase property values, but attract business and opportunity in cities nationwide.

Children deserve an equitable and just education, not be sent to temporary, caged, portable classrooms and face the elements instead of enjoying proper hallways and classrooms. We urge our Hamtramck readers to vote “yes” for this important initiative.