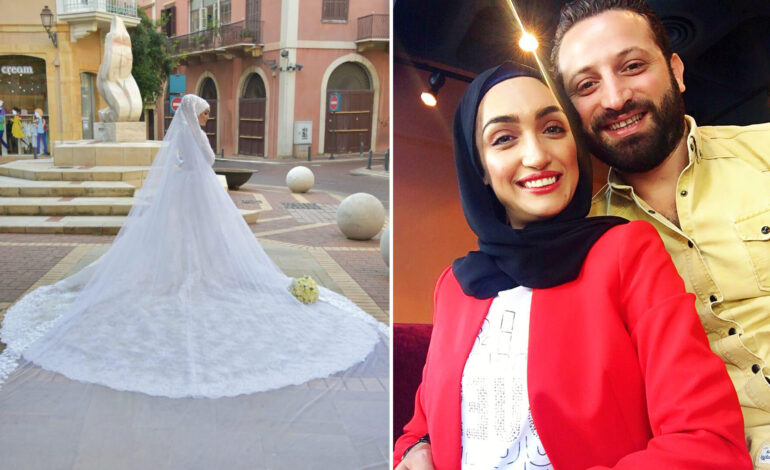 After experiencing the devastation in Beirut on her wedding day, Israa Al Seblani is pleading with the federal government to speed up the visa for her husband, Ahmad Sbeih. Photo(s) courtesy: Israa Al Seblani

BEIRUT — Aug. 4, 2020 was meant to be the happiest day of Israa Al Seblani’s life, but it quickly turned to be the most terrifying.

Al Seblani is the bride from the now viral video shoot taken during the explosion in Beirut that has killed more than 150 people and injured more than 5,000 more.

“The first thought that went through my mind was that I was going to die,” Al Seblani told The Arab American News. “I told myself, ‘Israa, you’re going to die. You’re going to lose your husband, your dream.’”

At the time of the explosion, Al Seblani’s now husband, Ahmad Sbeih, had stepped away from their wedding video shoot to get water for the bride and videographer.

“As soon as the blast happened, he was running towards me and we took shelter in a restaurant nearby,” she said. “I was just praying to see my family and hold their hands one more time.” I saw people around me bleeding and screaming, and here I was in a white dress and I just remembered my days working in the ER in a white lab coat and I knew I had to do something. — Israa Al Seblani

When Al Seblani, who is actually a doctor from Troy, saw the devastation outside, she said her instincts as a doctor kicked in.

“I couldn’t think about myself,” she said. “I saw people around me bleeding and screaming, and here I was in a white dress and I just remembered my days working in the ER in a white lab coat and I knew I had to do something.” She said while her husband called their families, she ran out to help.

“I had to do my job,” she said. “When he saw me helping people, he was happy. He knew I would be sad if I didn’t do something. It wasn’t about me.”

Al Seblani said that while she and her husband sustained no physical injuries, she is still struggling with the aftermath.

“I can’t believe what has happened,” she said. “It’s a miracle, truly a miracle we survived. I can’t even watch the video, I can’t keep hearing that sound. I haven’t been sleeping well or really eating. My mind keeps telling me that this isn’t real, this was just a nightmare. It isn’t real.”

While Al Seblani plans to continue to help those in need while in Beirut, her biggest fear is what the future holds. Al Seblani said it’s not just her husband she worries about.

“My country needs me,” she said. “How can I not only leave my husband, but leave my country when everyone is still looking for safety? Lebanese people are strong enough and love their country. It’s that love for their country that will get us through this.”

She also said that with her return to Michigan planned for just a few weeks away, she’s pleading with the federal government to speed up her husband’s visa.

“I want everyone to rest assured we are safe,” she said. “But if anyone can do anything at all to help speed up my husband’s visa, I would greatly appreciate this. I don’t want to leave without him. My heart goes out to the people of Lebanon; I just want to be able to bring my husband home.”