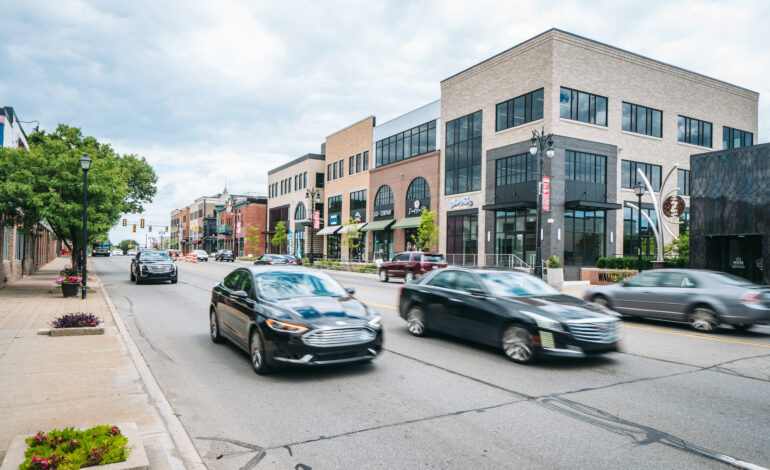 The new corridor will stretch from Detroit to Ann Arbor and include communities like Dearborn. Photo courtesy: Cavnue

The corridor will have a dedicated lane for autonomous vehicles that will travel through the 12th Congressional District, emphasizing communities such as Ypsilanti and Dearborn, and will include the Detroit Metropolitan Wayne County Airport in its route.

The corridor will also connect to the American Center for Mobility at Willow Run, a world-class proving ground and validation center for AVs that Dingell helped found. Dingell has also helped secure federal funding for the Michigan Mobility Collaborative. Additional partners in the development of the corridor are the University of Michigan, the city of Detroit, the Michigan Department of Transportation and Ford Motor Company. Cavnue will be the the master developer of the 40-mile corridor.

“As we continue to watch the auto industry transform into the mobility industry, today’s announcement of the connected and autonomous vehicle corridor further cements Michigan as the global leader of this industry,” Dingell said. “This has long been a dream of mine — using the best of Michigan’s technology, grit and innovation to build a first of its kind autonomous vehicle corridor. This is essential if we are to stay on the cutting edge of technology and innovation and create jobs here at home.

“This mobility corridor will inspire a new round of collaboration between private industry, academia and all levels of government to ensure that we realize the benefits of AVs for all aspects of society, and most importantly to ensure that this technology and the jobs that come along with it stay here in Michigan and don’t go overseas.”

The first of its kind in the nation, the development of the corridor will be broken into two phases. Phase one is estimated to take up to two years and will focus on the policy and technology to ensure the corridor runs efficiently and safely. Phase one will be privately funded. Phase two will be the groundbreaking of the corridor. The Michigan Central Station on Michigan Avenue in Detroit’s Corktown neighborhood. The plan for the corridor is to connect Downtown Detroit to Ann Arbor, with a dedicated lane for autonomous vehicles and transit. Photo courtesy: Cavnue

Dingell has previously advocated for research and safe implementation of autonomous vehicles in the U.S. and has backed legislation that would establish a framework of regulations of autonomous and connected vehicles.

The corridor will connect key communities and destinations along Michigan Avenue and Interstate 94 in Wayne County and Washtenaw County and will allow for a mix of connected and autonomous vehicles, traditional transit vehicles such as buses, and freight and personal vehicles.

It will build on existing investments made by the state of Michigan and local municipalities in smart infrastructure and transit and will link destinations like the University of Michigan and Michigan Central Station. The corridor includes up to a dozen “Opportunity Zones” for individuals, small businesses and communities along the route to have better access to Southeast Michigan’s most important industrial, technological, and academic clusters.

This includes leading test tracks, universities and automotive companies. According to a press release from Lansing, Michigan is home to the most diverse collection of autonomous vehicle and drone testing environments in the world, more mobility-related patents than any other state and more engineers per capita than anywhere else in the world.

Above: Promotional video for Cavnue, the master developer of the corridor project, a company that specializes in autonomous vehicle oriented infrastructure development