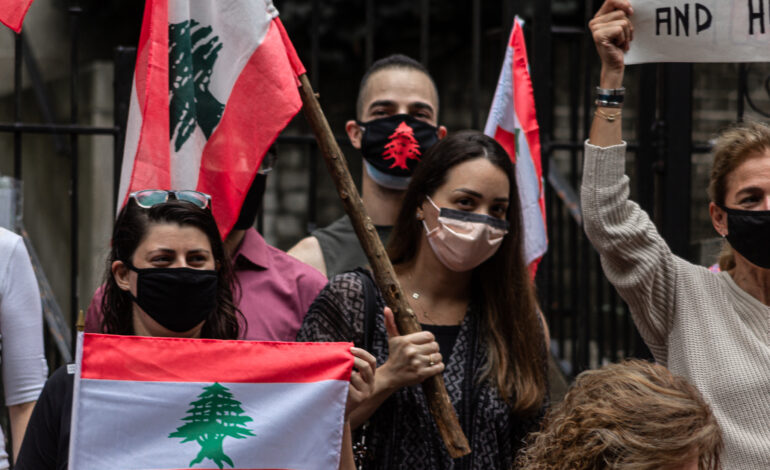 WASHINGTON, D.C. — Between 50 and 60 individuals from the Lebanese diaspora gathered in front of Lebanon’s Embassy in Washington, D.C. on Sunday afternoon. They demonstrated to show solidarity with, and demand justice for, the victims of the Beirut blast.

Compared to the demonstrations held last year at the height of the October revolution, Sunday’s protest had a subdued atmosphere. Attendees held signs beyond the embassy gates, where wilting flowers and faded photographs lay from a past memorial. The Lebanese flag swayed at half-mast above a chattering crowd sharing stories and thoughts about the way forward.

The protest was organized by the Lebanese Diaspora for Action (LDA), a group formed last year to represent diaspora voices in the D.C., Maryland and Virginia area in light of the Lebanese Revolution of October 17. The LDA  is part of an international network called Meghterbin Mejtemiin (roughly translating to “Diaspora United”) that holds protests and initiatives to support the Lebanese people in their fight against a corrupt government.

Nour Chaaban, 29, a D.C. resident and an organizer with the LDA, lost two friends in the explosion.

“I was on a call for work and one of my roommates was on a call with his sister in Lebanon when the blast happened,” Chaaban said. “He couldn’t get ahold of her [anymore] and we were in a state of panic until we were able to get ahold of our families — it’s something horrible to experience.”

On Aug. 4, an explosion rocked Lebanon’s capital, Beirut, killing at least 200 people and injuring more than 5,000. Reports indicate that the explosion was caused by 2,750 tons of ammonium nitrate that were insecurely stored at the Port of Beirut since 2014. The group was not clear on who should take on (the Beirut explosion) investigation, but said it believed that the Lebanese government would impede its results.

Chaaban highlighted two of the group’s demands: An independent investigation into the conditions that lead to the explosion on Aug. 4, and the removal of the Lebanese regime.

“We demand the fall of this entire temple, this whole (political) system,” Chaaban said. “We understand that we don’t want to leave a vacuum and (that) it’s very difficult to demand the resignation of everyone. Practically, we demand a smaller cabinet with legislative authorities to set up a fair electoral law that will (allow) new faces and newer blood in power.”

The group was not clear on who should take on this investigation, but said it believed that the Lebanese government would impede its results. More than 300,000 residents of Beirut have been left homeless by the explosion and the costs of reconstruction are estimated to top $15 billion. Groups like the LDA are urging international donors to avoid sending aid directly to the Lebanese government and to instead give to NGOs (nongovernmental organizations) on the ground.

Rita Akouri, 58, a D.C. resident, was at work when she received a WhatsApp message from relatives in the United States about the explosion. She rushed to watch the news and call her family in Lebanon to check on them.

“In the beginning, we all thought it was an attack,” Akouri said. “You are faced with dread, your brain stops working and you can’t understand (what has happened). The government has committed a crime against its people and we need help.” Mothers used to cry when their children immigrated, but today mothers cry because their children have not left the country; can you imagine the pain? —  D.C. resident Rita Akouri

“Mothers used to cry when their children immigrated, but today mothers cry because their children have not left the country; can you imagine the pain?” Akouri said. “The minimum we can do abroad is be here today to stand with our families in Lebanon.”

Julia Barakat, 23, a Maryland resident, and Rola Saleh, 27, a DMV (District of Columbia, Maryland, Virginia) area resident, were vocal about their dissent against the Lebanese government.

“We’re so angry,” they both said simultaneously. They were at work when the port exploded.

“My phone was off, when I turned it on I (saw) all these videos and freaked out,” Barakat said. “It’s so surreal, you would never think something like that would happen. No one (in my family) was seriously injured, (but) homes were destroyed… they’re okay physically.”

Barakat and Saleh attended Sunday’s protest to show solidarity with the Lebanese people. We know (that) the sectarian political parties are very organized both in Lebanon and abroad. The diaspora has never really organized en masse for this kind of movement and progress. — D.C. resident Audrey Bolus

Multiple protests have taken place across the world in recent days: Lebanese diaspora communities in American, Canadian, and European cities have held vigils, organized donation drives and demonstrated. New York’s protests have been the most numerous and confrontational, with repeated gatherings calling for the resignation of the New York Lebanese Consul, Abir Taha.

Audrey Bolus, 25, a D.C. resident and an organizing member of the LDA, said that diaspora groups are using their privilege and freedom of expression to support the revolution in Lebanon.

“We know (that) the sectarian political parties are very organized both in Lebanon and abroad,” Bolus said. “The diaspora has never really organized en masse for this kind of movement and progress, so that’s what we’re trying to do on local and international levels with other cities that we coordinate with.”

Around the same time the D.C. protest was dispersing, demonstrators in Los Angeles were gathering at Sunset Boulevard in front of the CNN building. Organized by Califorleb, a California-based grassroots group affiliated with Meghterbin Mejtemiin, the protest aimed to bring attention to issues that Lebanon is currently facing.

Silvana Kordab, 25, one of the founders of Califorleb, said she hopes to channel the rage felt by the diaspora into initiatives that can help the Lebanese people back home.

“Now is the time to continue (fighting),” Kordab said. “We are protesting against the entire entities of government; we still need the president, (speaker) of parliament and members of parliament to resign. We have some initiatives set up to raise funds, to give money directly to people (in order to) repair their homes.”

Califorleb’s GoFundMe page has raised more than $14,000 since its launch on Aug. 4. According to a video posted on its Youtube channel, the group has collaborated with the L.A. Rotary Club and Foundation, Shaabe Masouleyati and the Banin Charity Association to distribute aid across Lebanon. While there has been an increase in donations to Lebanon since the blast, there have also been issues of discriminatory practices while said aid has been distributed. The Banin Charity Association, for instance, has been criticized on social media for refusing to help Syrian refugees in Beirut who were affected by the blast. The charity has since deleted comments on Instagram criticizing its racist policy.

The presidency of the Council of Ministers has unlawfully extended the state of emergency to September 18, leaving the Lebanese people under the mercy of the military. Additionally, Lebanon’s caretaker interior minister, Mohammed Fahmi, has announced a mandatory lockdown from Aug. 21 to September 7, after a surge in COVID-19 cases.

Other protests are expected to take place in Lebanon and abroad in the coming weeks.

Laura Albast is Palestinian-American and works at an NGO in Washington, D.C. She holds degrees from the American University of Beirut and Boston University.