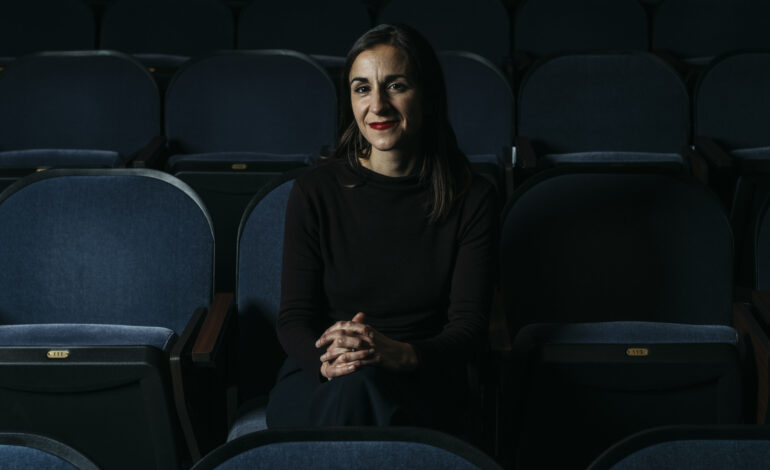 AXD organizers say the 22 commissioned pieces showcased this year reflect on “the significance, ambiguity, resilience and uncertainty of this contemporary moment” and encompass in various ways Detroit’s legacy and evolution.

One such AXD commission is the experimental short film by artist and Harvard University-trained anthropologist Julia Yezbick, who showed a trailer for her latest work, Marratein, Marratein. A meditation on the ambiguity and dissonance of identity and belonging, the film enmeshes scenes of Detroit and Beirut to explore the idea of returning to a supposed ancestral place, from the vantage of someone who’s never been there and is removed from it by generations.

“My background is in documentary film, but over the years I’ve tended more towards (experimental filmmaking),” Yezbick told The Arab American News. “This film in particular was started when I went to Beirut for the first time in 2018. My family is Lebanese, but we’re several generations deep in Detroit.”

Yezbick said Marratein, Marratein is a departure from her previous work in that it incorporates a personal element. That first trip to Beirut was for an artist residency for which she stayed in a Beirut apartment with her husband and young children and filmed the city on a Super 8 camera, with non-synchronous sound, over a month or so. The rest of the film is shot in Detroit, where Yezbick resides.

The grainy, Super 8 stock lends a certain patina to the vignettes of urban geographies of Detroit and Beirut, evoking the familiarity and comfort of a home movie. It also adds a temporal uncertainty as modern settings are observed through a primitive mechanism. In this way, the film creates an unsettled sense of time and geography and lets Yezbick explore the struggle of finding or creating one’s own sense of identity and cultural belonging.

“I was interested (in) what shooting on a Super 8 camera would lend to the aesthetic of the piece since this was a personal piece about my own family’s history, and my own relationship to these two places,” Yezbick said.

There are these similarities (in the film) in returning to places that I hadn’t really been grounded in previously, but had these tenuous relationships to. — Julia Yezbick

A complex relationship to space

Yezbick said she wants viewers to know that though the film has something to say about diaspora, it does not meld Detroit and Beirut to compare the two cities. Rather, it is an ode to the unease and uncertainty of being in a place one may only be connected to historically.

“I was interested in exploring this idea of returning to a place you personally may never have been, but may have some connection to,” Yezbick said. “Detroit is equally a part of this film. I live in Detroit now, but I grew up in Ypsilanti and Ann Arbor because my family left Detroit like a lot of families did in the mids20th century.

“So there are these similarities in returning to places that I hadn’t really been grounded in previously, but had these tenuous relationships to.”

Marratein means “twice” in Arabic; and in this act of melding sequences from Beirut and Detroit, the film doubles over itself as a palindrome — a word or phrase that reads the same backward as forward. It also highlights Metro Detroit’s deep history of immigration from the Middle East and the region’s vibrant diaspora communities.

Yezbick had done a fair bit of international travel as part of her anthropology training. She noticed the obvious remnants of European colonialism in the language and architecture in Beirut, something that ties it to the Francophile aspects of Detroit.

But then, something more interesting occurred. Once in Beirut, the mundane reality of everyday life became apparent to Yezbick; and with that came a certain familiarity. Those feelings were much more pronounced than any grand epiphany that she had returned to an ancestral motherland.

“I had this sense of familiarity in Beirut, but not in a romantic sense, but a kind of banal familiarity,” Yezbick recalled. “I don’t mean that in a disparaging way, but there was a comfortability that I wasn’t expecting. I think I was expecting a certain amount of culture shock, which I didn’t experience.

“At first that was sort of disappointing, as I was looking for inspiration for the film, but then that feeling pointed to a more complex relationship (to place), more complex than just a facile romanticism, or its opposite, anger.”

Overall, Marratein, Marratein is an evocative critique of the notion of romanticized “homelands” and explores what we mean when we say we belong to a place.

This isn’t to say the project doesn’t bring up some raw feelings for Yezbick, especially in light of the devastating explosion in Beirut earlier this month. The apartment in which Yezbick carried our her residency is near the city’s port and sustained serious damage from the blast, as did many other artist studios in the city.

Overall, Marratein, Marratein is an evocative critique of the notion of romanticized “homelands” and explores what we mean when we say we belong to a place. An added metaphor to motherhood runs through the film. Yezbick would often have her kids in tow while filming, but motherhood also signals the ways in which we think of cultural and ethnic heritages — mother tongue, motherlands etc.

Though Marratein, Marratein is still in post-production, more information on Yezbick and her work can be found on her website: work.juliayezbick.com. An early trailer for the film can be viewed at www.artxdetroit.com/marratein-marratein.