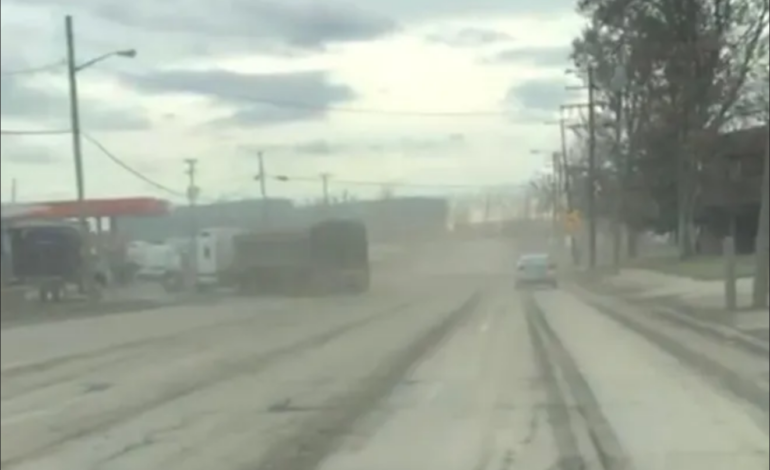 The ordinance requires industrial trucks to cover their trailers to prevent dust, debris, smoke, odor, vapor and/or gaseous substance from polluting the air and obstructing traffic.

DEARBORN — The Dearborn City Council unanimously passed ordinance No. 20-1680 to provide for several different environmental protections that have also been advocated for by state Rep. Abdullah Hammoud (D-Dearborn).

“Nearly five years ago, I met an elderly gentleman in the south end of Dearborn,” Hammoud said. “After a few exchanges about our shared love for this community and how we wanted to improve it, he left me with one request: ‘Don’t forget about us.’”

Hammoud said that is a promise he has carried with him since.

“While I am thrilled this city ordinance passed, I still recognize there’s more work to be done,” he said. “When you fight for your home, you never stop.”

The ordinance requires industrial trucks to cover the trailers to prevent dust, debris, smoke, odor, vapor and/or gaseous substance from polluting the air and obstructing traffic. The ordinance requires industrial trucks to cover their trailers to prevent dust, debris, smoke, odor, vapor and/or gaseous substance from polluting the air and obstructing traffic. All companies will be responsible for reducing the amount of dirt and debris that carries onto public roads from their properties and all companies must reduce the fugitive dust, or dust and debris that becomes airborne, that spills into the neighborhoods.

The ordinance also states that any violation will result in a ticket and fine, with fines used on public health and pollution prevention projects.

The city’s website said that the city is committed to providing a safe, healthy, livable environment for its residents as much as resources and authority will allow.

“We are the best advocates for our own residents,” he said. “And so, we are covering the gaps in what the state of Michigan should be regulating to improve the health of the community members.”

The authority to regulate air quality lies within the state of Michigan, but the city wanted to address the concerns of residents in regards to fugitive dust.

We want to ensure all of our residents have a high quality of life. — Susan Dabaja, City Council president

The city’s website describes this as visible particulate emissions created through mechanical processes or natural forces and that it comes from a variety of sources.

David Norwood, the city’s sustainability coordinator, said dust like this can be very harmful.

“One of the main air pollution issues has to do with particulate matter,” he said. “Those are hard on respiratory systems, especially with regard to children and the elderly.”

With Dearborn being so close to so many industrial facilities, Council President Susan Dabaja said this ordinance is meant to not only improve the air quality.

“We care deeply about our residents,” she said. “And we are working as much as we can to reduce pollution to the extent possible. We want to ensure all of our residents have a high quality of life.” Dabaja said that this process took almost two years and a lot of time to develop.

“The city has never really had to deal with something like this as it’s the state’s jurisdiction,” she said. “This was brought forward in early 2019 and the ordinance we were given reflects a lot of what the state mandate says. Instead of just passing it off as a state issue, we decided to figure out what we could do for our residents and develop an ordinance we could enforce.”

With the help of Salah Ali, a board member of Michigan League of Conservation Voters, Nick Leonard of Great Lakes Environmental Law Center, Brad Mendelsohn of the city’s legal team, Dave Norwood and residents Samraa Luqman, Gussan Abdelkarim and Mahdi Ali, Dabaja said this was made possible.

“We spent countless hours together addressing concerns and how they could be resolved,” she said. “We had several study sessions and town halls on this and it was important for us to hear from the residents. We developed this ordinance as a type of nuisance ordinance as the concern of liability had come up a few times in regards to this being so similar to what the state mandates.”

With all of the discussions that took place, Dabaja said that some industrial businesses in Dearborn have already taken a proactive approach. “We met with some of the businesses as well and since July 27, Levy has been putting a tarp over their vehicles to limit the amount of dust released into the air,” she said. “They have also been committed to rerouting some of their trucks to limit the traffic in residential neighborhoods.”

To enforce the ordinance, Dabaja said the city’s building and safety department will assign an inspector specifically for this.

“That one inspector will be in charge of this,” she said. “And any money from the fines will be reallocated to environmental and health projects in the area in which the fine took place.”

Dabaja said that while her colleagues remained patient and supportive during this process, she believes more needs to be done.
“I felt very strongly that something needed to be done,” she said. “And this is just a start and a step in the right direction. We will be having outreach and educational sessions on this topic beginning in September as well, but we believe this is a step in the right direction in doing what we can for our residents.”