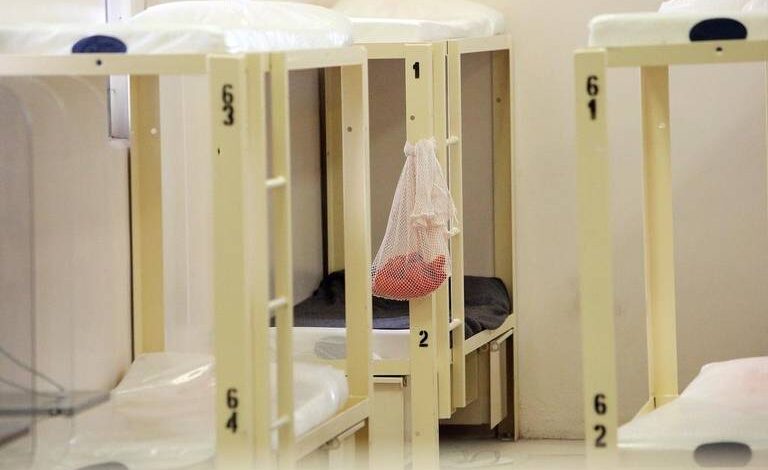 Inside the Krome Detention Center in Florida. Photo: Jose A. Iglesias/The Miami Herald

WASHINGTON, D.C. — U.S. Reps. Rashida Tlaib (D-Detroit), Ilhan Omar (D-MN) and Andre Carson (D-IN) are leading a letter to the Department of Homeland Security that calls for a full investigation into allegations that ICE (Immigration and Customs Enforcement) fed detainees pork, in violation of their religious tenets.

The organization Muslim Advocates reported last week that Muslim ICE detainees at the Krome detention facility in Miami were forced to choose between eating pork or eating rotten halal food. A detainee provided photos of food labels, showing the halal food expired in August 2017, but was served in December of that year, pictured below.

The members of Congress and advocating organizations say this incident is in a long line of allegations of ICE violations of its own protocols regarding religious accommodations for detainees, including denial of Kosher meals to Jewish detainees and violations against Hindu and Catholic detainees.

The letter was also signed by U.S. Rep. Debbie Dingell (D-Dearborn) and several other members of Congress. Federal officials must not be allowed to carry out the hate agenda of this president with impunity. — U.S. Rep. Rashida Tlaib (D-Detroit)

“This incident in Miami is just one more in a long line of acts of gross dehumanization of our immigrant neighbors by the Trump administration,” Tlaib said. “Federal officials must not be allowed to carry out the hate agenda of this president with impunity. Those subjected to this abuse deserve justice and I am proud to join my colleagues in demanding it, as well as working to ensure no other is subjected to it again.”

“The United States was founded on principles of religious liberty and equality before the law,” Omar said. “This episode represents only the latest betrayal of those principles by the Trump administration — a presidency built on xenophobia and anti-Muslim hate — and a brutal reminder of the inhumanity of ICE detention. This cruel system of abuse must end and its perpetrators must be held fully accountable.”

“These allegations of mistreatment are extremely troubling and demand immediate investigation,” Carson said. Forcing anyone to violate their religious principles undermines America’s protection and value of religious freedom. We should all be concerned by how ICE has continued to mistreat detainees and violate basic decency and human rights.”

ICE has publicly denied the allegations. The letter calls on the DHS’ Office of Civil Rights and Civil Liberties to fully investigate as well as preemptively investigate other facilities with significant numbers of detainees needing religious accommodations.

The full letter is available here.