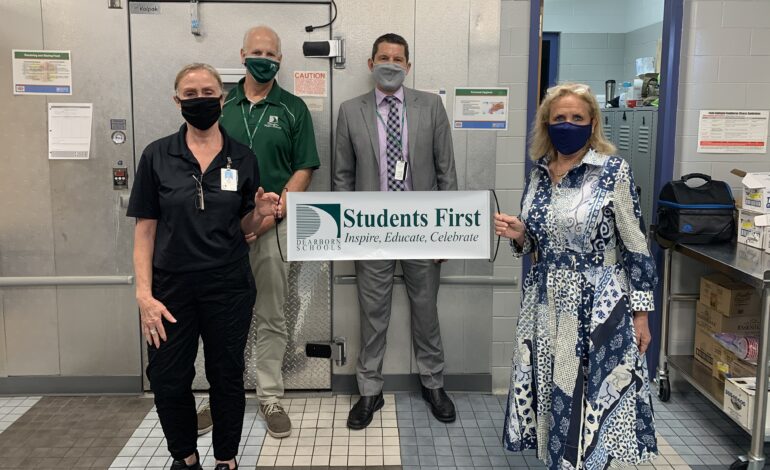 DEARBORN — After months of planning and debate, Dearborn Public Schools opened classes for its students this week.

A “soft start”, beginning Monday, Aug. 31, saw the school district open up with an amended half-day schedule for the first week, to allow students and their parents and teachers adapt to the online-only instruction program the district will have to adapt to for the foreseeable future.

The district has brought in new tools to deliver its educational services to students at home, including Zoom and Schoology. Learning labs of small groups will offer additional in-person assistance to students for academic and social-emotional issues, insuring some face-to-face time for students, with health guidelines in place.

Preparations and distributions of nutritious meals and school supplies, including Chromebooks, occurred this week, with U.S. Rep Debbie Dingell (D-Dearborn) joining in the activity at two district schools where she talked with teachers about their concerns. Superintendent Glenn Maleyko closely monitored his district’s progress with visits to schools and meetings with staff. Maleyko has been in routine contact with county health officials as well, as a return to in-person learning may still be an option, depending on the COVID-19 situation in the region.

Maleyko told The Arab American News that the next few weeks will be the time for further adapting to this new, unprecedented virtual schooling environment.

“We’re calling the first two to three weeks a soft start,” Maleyko said. “The first week is about getting situated with materials, new passcodes for our new systems, which is Schoology and Zoom. Our IT department worked really hard on this (technology transition).”

The Dearborn School Board approved the platforms on Aug. 6. The district had to implement a changeover that would have normally taken months. Some hiccups, like students receiving wrong passcodes, were anticipated. Maleyko said school staff has really stepped up and many parents are understanding.

The district has given parents an option to sign up for an entire year of virtual learning, where if the district were to resume in-person learning, the students will resume learning virtually or find a school that has an opening for them.

The rest of the students will learn virtually for now and will return to the same schools they are enrolled in if in-person learning opens back up. More than 4,000 students have signed up for the year-long virtual learning program. There was some confusion over the two options initially, which the district ironed out accordingly.

“We had to shift about a quarter of our staff, especially the elementary staff, to accommodate the year-long virtual program,” Maleyko said. “We were allowing parents to sign up into just a little over a week ago.”

Overall, Maleyko said the school opening has proceeded without many problems.

“I’m pleasantly surprised as I thought there would be more issues,” he said. “It’s not perfect, but no opening to a school year is; and you’ll never be perfect in this situation, since no one has ever done this before.”

A good thing (the district) did was that advisors and teachers from the schools called up every family to ask if we had any questions, which helped a lot — Manal Youssef, parent

Parent Manal Youssef said the first week resumed without too much difficultly for her daughter, a seventh grader at Bryant Middle School.

“We were a little lost in the beginning, as we received instruction through email about school schedules and about Zoom and Schoology,” Youssef said. “A good thing (the district) did was that advisors and teachers from the schools called up every family to ask if we had any questions, which helped a lot.”

The normal school days will encompass a mix of online learning, asynchronous (not live with the teacher) learning, advisory sessions and interventions, with some differences between elementary, middle and high schools. More details on that staggered schedule were given out this week.

“Lana prefers to be in a class, of course, but for now we are fine with the online learning,” Youssef said.

Youssef said she chose not to register Lana for the year-long virtual learning program because she wants to give her daughter a chance to go back to in-person learning and socialize with her peers when it is safe to do so.

The COVID-19 situation in the hard-hit Metro Detroit and Wayne County region will determine if that will happen this year. The neighboring D7 School District in Dearborn Heights gave parents a choice between online and in-person learning, with 40 percent of students now enrolled in the latter.