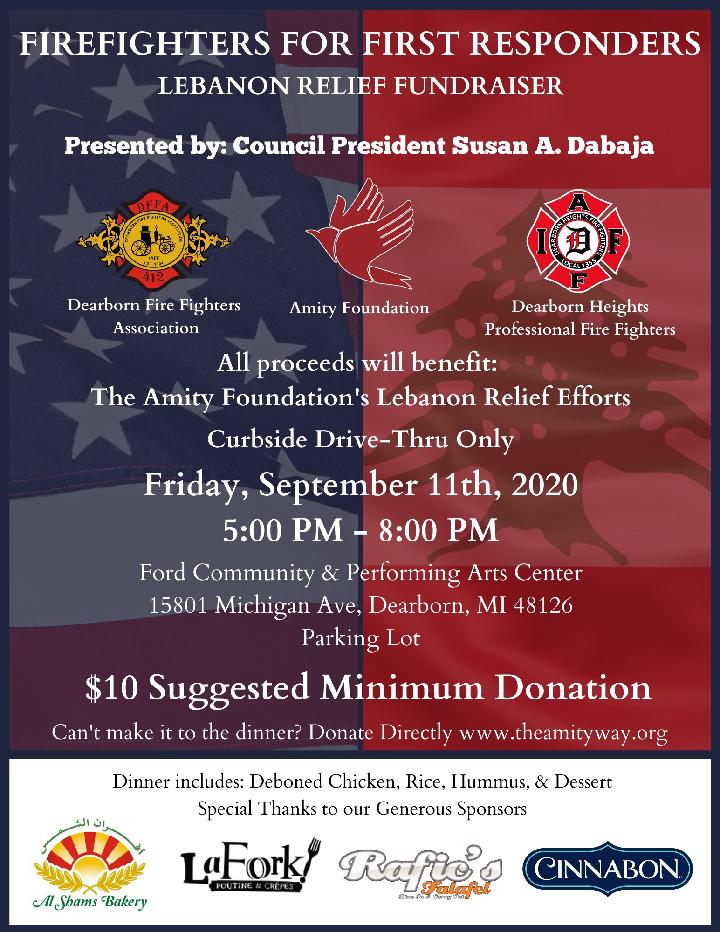 Fundraiser being held for Lebanon on 9/11

The Amity Foundation, a local non-profit in the Dearborn and Dearborn Heights communities, will be hosting the event and will be delivering the money directly in Lebanon in the coming weeks.

Amad Elzayat started the organization many years back and raises money for things important to the community.

Dabaja said that the money being raised is going to be primarily sent to victims and first responders in Lebanon for relief efforts after the August 4 Beirut port explosion, which claimed the lives of nearly 200 people and injured more than 6,000 more.

“My parents migrated from Lebanon in the early 70s and my husband is from there,” Dabaja said. “We’ve taken our children there. We have connections to Lebanon and we are devastated and worried after this happened.”

Dabaja also said that when she reached out to the Dearborn Fire Union to participate in the event, they were more than happy to help.

The fundraiser event will be a curbside drive-thru food distribution on Sept 11.

“We thought 9/11 would be fitting,” Dabaja said. “We thought this would be a great way to honor the first responders that gave the ultimate sacrifice so many years ago.”

The event is being sponsored by Al Sham’s Bakery, La Fork, Rafic’s and Cinnabon, which is being provided by Abbas Khalil and his daughter.

“The city and my Council colleagues were on board with us utilizing the Ford Community and Performing Arts Center and the police department will help by controlling traffic,” Dabaja said. “We have had a lot of people reaching out to help with this as well, but we couldn’t do this without the support of the fire departments.”

Dabaja said the support from the fire departments is extremely important for the community.

“This community is very giving,” she said. “As a Lebanese American, it gives me great pride to live in a community where our fire departments are compassionate enough to be thinking of first responders across the Atlantic in a completely different country and that they support this community enough to help with an event like this.”

The event will take place on Sept 11 from 5 p.m. – 8 p.m. at the Ford Community and Performing Arts Center. The dinner being distributed includes deboned chicken, rice, hummus and dessert and requires a suggested minimum $10 donation.