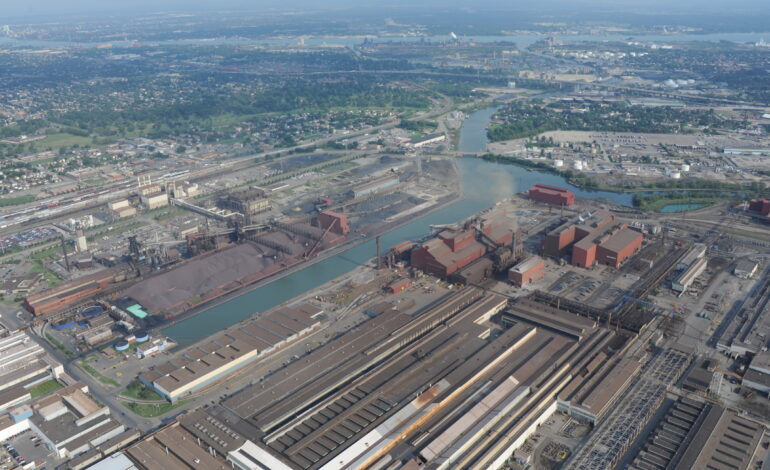 An aerial photo of the Rouge Manufacturing Complex and the Rouge River. Photo courtesy: CLUI

DEARBORN — A report by The Michigan Department of Environment, Great Lakes and Energy (EGLE), shows PFAS contamination in the groundwater and storm water at the Rouge Manufacturing Complex (RMC) in southeast Dearborn.

Both Ford Motor Company and AK Steel conduct manufacturing operations on the site, which is bordered by the I-94 freeway to the north and the Rouge River to the south.

Per- and polyfluoroalkyl substances or PFAS are man-made chemicals used in a variety of manufacturing industries since the mid-20th century. These chemicals don’t break down naturally and have been shown to produce serious health problems in humans, including low infant birth weights, effects on the immune system, cancer and thyroid hormone disruption.

People can be exposed to PFAS found in many commonly used chemically-treated products to make them stain- and water-repellent or nonstick, including carpets, leather and apparel, textiles, paper and packaging materials, and non-stick cookware.

But people can also be exposed to PFAS by other means, like their drinking water, if that water was contaminated by industrial facilities like the RMC.

The report says the EGLE conducted an investigation into PFAS and into the nature and extent of PFAS in groundwater and storm water in the complex and its neighboring Schaefer Road Area Wastewater Treatment Plant due to nearly a century of manufacturing and waste management activities at both properties. Samples taken last year from groundwater in the Schaefer Road area and groundwater and storm water at the RMC both showed levels of PFAS that exceeded the EGLE’s drinking water criteria. Groundwater from the complex typically discharges out through storm sewers to the Rouge River once it reaches a “low point.”

Though the PFAS levels are concerning, and monitoring bodies like EGLE continuously update their safety criteria, the EGLE investigation shows no expected impact to residential wells in the neighboring area.

“The area surrounding the RMC is a mixture of industrial, commercial and residential land use with municipally supplied water,” the report says. “No residential wells are expected to be impacted. The closest residential area is approximately one-half mile southeast of the facility.  No drinking water wells have been identified within one-half mile from the facility boundary.” The report says the groundwater to surface water (river water) interface (GSI) pathway is expected to be the main pathway of concern at the site. This simply means there is potential for the contaminants to flow into the river.

The Rouge River discharges into Lake Erie – one of the sources for the Great Lakes Water Authority (GLWA).

“Dearborn is served by GLWA, which is tested for PFAS monthly,” Scott Dean of the EGLE told The Arab American News. “GLWA’s results are pretty consistently non-detect for PFAS.”

Sill, there is potential for the groundwater from the RMC to carry contaminants to the Rouge River. The report says the groundwater to surface water (river water) interface (GSI) pathway is expected to be the main pathway of concern at the site. This simply means there is potential for the contaminants to flow into the river. Typically water is transmitted to homes from the near surface water source, though that water goes through stringent checks and cleaning at treatment plants along the way.

The EGLE met with Ford and AK Steel earlier this year to request corrective action regarding the PFAS levels. It has also requested further investigation into the nature and extent of PFAS contamination on the site, and the potential for off-site movement or discharge of PFAS to the Rouge River.

The report also says Ford and AK Steel are working to develop a corrective measures study to address potential off-site movement and discharge to the river.

Michigan is a hotbed for PFAS sites, according to recent national data. Nationally, besides sites of industrial capital, PFAS have also been found on Department of Defense sites. The harmful chemicals have been the subject of numerous documentaries over the years, and a 2019 Hollywood film based on real events, Dark Waters.