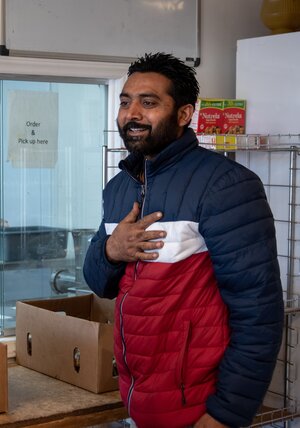 Tanvir v. Tanzin is a lawsuit filed on behalf of American Muslim men who were added to the no-fly list by the FBI in retaliation for refusing to spy on their religious communities.

The plaintiffs in the case are four American Muslim men with no criminal records. They were allegedly approached by the FBI in an effort to recruit them as informants.

Due to being placed on the no-fly list, some of the men were not able to see family members overseas for years. One was unable to visit his gravely ill grandmother, one was separated from his wife and three young children for nearly five years and another was unable to see his wife for nearly two years.

The original complaint, on behalf of plaintiff Muhammad Tanvir, was filed by the CLEAR (Creating Law Enforcement Accountability and Responsibility) project of CUNY (City University of New York) School of Law and later joined by the CCR (Center for Constitutional Rights).

Plaintiff Awais Sajjad said that he was conflicted.

“I do not want to become an informant, but the government says I must in order to be taken off the no-fly list,” he said. “How can the government tell me that the only way I can see my family again is if I turn my back on my community?”

Another plaintiff, Jameel Algibhah, said this has completely destroyed his family.

“They have done a lot of damage to me and to my life,” he said. “They messed up my life. I haven’t seen my family in a long time. My youngest daughter doesn’t even know me.”

The original lawsuit was filed in October 2013, and while all plaintiffs have been removed from the no-fly list, a statement on the CCR’s website said that the lawsuit now is about damages.

“The remaining portion of our lawsuit seeks damages for the fact that our clients were kept on the list without cause and in retaliation for their assertion of constitutional rights in refusing to serve as informants,” the statement said. “The men have lost jobs, been stigmatized within their communities and suffered severe financial and emotional distress as a result of their placement on the list. The issue of whether the 1993 Religious Freedom Restoration Act allows for damages is currently pending before the Supreme Court, which will hear the case on October 6.”