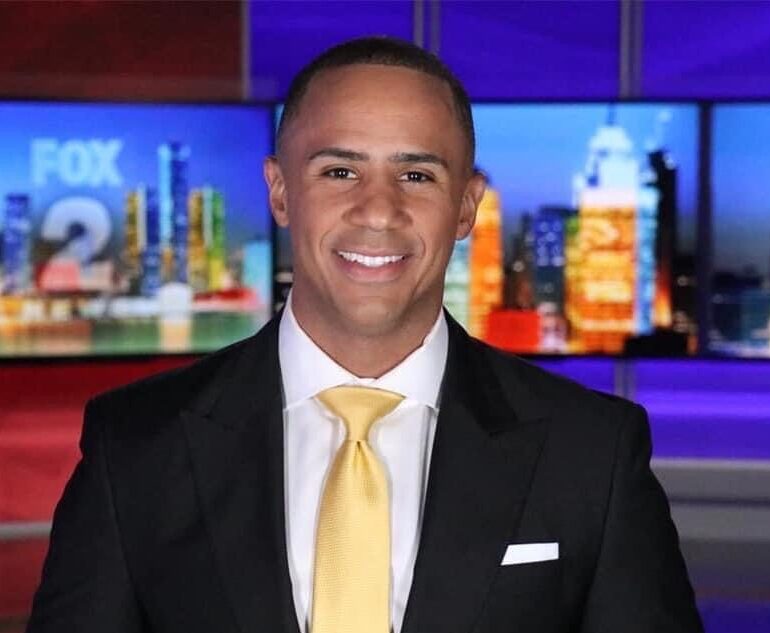 DEARBORN — Many in Metro Detroit know Josh Landon as a charismatic 36-year-old FOX 2 News early morning news anchor. Raised in Detroit’s east side, Landon began his professional reporting career early in life and worked for many years in several cities, including Milwaukee, Wisconsin, Fort Myers and Miami, Florida and Richmond, Virginia before he returned to Detroit in November 2015 to take up an opportunity as a reporter and later as an anchor at one of the area’s most popular TV stations.

What many may not know of the Denby High School and Eastern Michigan University graduate is that Landon’s family tree extends out from Detroit into the Lebanese American community in Dearborn.

Landon is half Lebanese, half Black. Though his relationship with his Lebanese side has often been rocky and complicated, he remains connected to it, in one way or another. Landon was kind enough to visit The Arab American News offices recently for a candid discussion of this history. Landon and his father, Mahmoud Bazzi

His remarkable story sheds light on the dynamics of race and culture in the extremely diverse Metro Detroit region. It also illuminates toxic ideas about race that often emanate from Dearborn’s Arab community.

Landon’s late father, Mahmoud Bazzi, is from Bint Jbiel, a town in the south of Lebanon from which many Lebanese in Dearborn trace their roots. Bazzi came to the U.S. around the time of the Lebanese Civil War. However, Landon was raised by his Black mother and her family, as he grew up mostly estranged from his Lebanese father.

Though there was some discussion about giving Landon an Arabic name, his mother felt strongly about the name Joshua.

“My mother wanted to name me Joshua from the Bible,” Landon said. “She’s a big fan of (the movie) The 10 Commandments and she loves the character of Joshua.”

Landon’s mother, Lela, met his father in the late 70s. She had migrated to Michigan from Montgomery, Alabama. They met at the Thorn Apple Valley slaughterhouse near Eastern Market in Detroit where both were working. Young Landon (right) in his neighborhood on Detroit’s east side

“My father and mother dated, and from what I’ve been told, a lot of relatives (from my Lebanese side) did not approve of my father being with a Black woman,” Landon said. Succumbing to this pressure, Landon’s father would marry a Lebanese woman, but continued his relationship with Landon’s mother. The relationship between them, however, extended well into Bazzi’s marriage, with Landon’s sister, Porsche, born some four years later.

Bazzi had children with his Lebanese wife as well, and Landon’s half brother was born just a month and a half after Landon. Landon has five half siblings.

From what he knows about his father, Landon said Bazzi was a good man early in his life who made some bad choices.

“I’m not angry at him, but I think we as men have to own up to our responsibilities and to our situations,” Landon said. “I never faulted him for having children with another woman. I never faulted him for marrying a Lebanese woman because he may have felt pressure to not be with a Black woman and be with (someone Lebanese instead).” Landon and his sister, Porsche

Bazzi was mostly absent for most of Landon’s early life, even while Bazzi lived in Dearborn, just a little ways away from Landon’s neighborhood. The biggest issue Landon had with his father, however, is that he didn’t know his Lebanese siblings growing up.

Landon said he thinks his half siblings found out about him and his sister later on in life. Though his mother kept the door open for the families to be introduced and for Bazzi to be a bigger part of Landon’s life, the pressure on Bazzi was too much.

Landon’s mother would eventually go on to marry her now-husband, Brian, when Landon was 22.

Though not properly introduced to his Lebanese side growing up, Landon remarkably met one of cousins, Charlie, aka Khalil, for the first time when a family friend informed his mother that Charlie operated a gas station just blocks away from where Landon lived.

“I used to ride my bike to that BP gas station,” Landon said. “I was going into that gas station buying pop and candy, never knowing that my relatives owned it.” Landon still maintains a good relationship with several of these cousins, who were actually related to his father from Landon’s grandfather’s first wife — Bazzi’s father married twice. Bazzi was upset at this relationship, since he was not close with his own father’s other family. Later, Landon’s relationships extended to include Joe (Youssef) Bazzi, the manager of Byblos Banquet Center, Kayed Bazzi and Hassan Kayed Bazzi.

Bazzi and Landon eventually had a falling out over this disagreement.

“My point of view was, ‘well, you never introduced me to any of my family, so how can you be upset with who I’m associated with?’” Landon said. “I can go to Montgomery, Alabama and go to the house she [his mother] grew up in; I don’t have those roots on my Lebanese side and I felt it was my father’s responsibility to show me those roots.”

Bazzi passed away in April of last year at age of 57, from multiple health problems. Though they eventually reconnected for a short time just before Bazzi’s death, many questions Landon had about why Bazzi kept his Black family in the shadows remained unanswered. Landon with some of his Lebanese cousins

Landon gives his father the benefit of the doubt, though he can’t help but think race was a significant part of why Bazzi kept his Black family in the shadows all those years.

Over the years, Landon also tried reaching out to his half siblings to try and establish a relationship with them. To this day, his four half brothers have refused to give him this relationship fully, though they remain civil at a distance. Porsche and her half sister are somewhat closer.

Landon continues to have love for his father and the emotions around that time are still raw. Even after the estrangement from Bazzi, and the cold shoulder from his Lebanese siblings, Landon said his heart is open and that he welcomes a good relationship with that family.

Moreover, Landon said his hope is to see the gap close between Detroit’s Black and Arab communities.

“We have a lot of similarities and a lot of division,” he said. “This goes for all (people); I think we need to stop thinking we’re better than the other person.”

Above: The Arab American News speaks with FOX 2 anchor Josh Landon about his Black and Lebanese Heritage Landon with his father, Mahmoud Bazzi Landon and Porshe with their mother, Lela Landon with his sister, Porsche