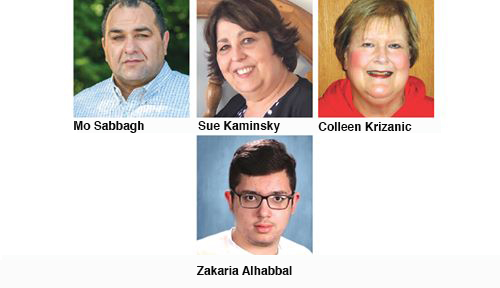 Crestwood Board of Education candidates for Nov. 3, 2020 general election

DEARBORN HEIGHTS — Five candidates — two incumbents and three newcomers — are competing for two available six-year-term seats on the Crestwood Board of Education.

Sue Kaminsky has been a member of the school board for five and a half years and has lived in the Crestwood District since 1991. “My kids went to school here,” she said. “I have been a Dearborn Heights resident since 1977 and moved to the Crestwood district in 1991 when my children started school.”

Having been married for 37 years with no criminal background, Kaminsky said that she has always been involved.

“I was always involved in my kids’ schools and the community as well,” she said. “I just couldn’t run for a position sooner because of my job. I believe in our community and I am excited to see the growth in this community.”

Fellow Board Member Colleen Krizanic is also running for re-election. “I graduated from Crestwood in 1972,” she said. “I’ve lived here all my life and I had two children in the district.”

Krizanic, who has been married since 1980 and also has no criminal background, has served on the Board of Education for 22 years.

“I love this city and this school district,” she said. “I still have more to give.”

Newcomer Mo Sabbagh is also heavily involved in the community.

“My wife and I have lived here for 15 years,” he said. “All four of my kids are in the district and I help coach with the high school.”

Zakaria Alhabbal, a 2020 Crestwood graduate,  is also running for one of the two seats. “I’m not married and I don’t have any children in the district or a criminal background,” he said. “I have lived in the district for five years and I actually just graduated from Crestwood High School this year.”

Kaminsky said that while she believes Superintendent Dr. Youssef Mosallam is splendid, she wants to see that work continue.

“Since I have been on the board, we have made a lot of changes,” she said. “I’d really like to see us acquire additional buildings so that we can have smaller class sizes to no more than 20 kids per class.”

Sabbagh said he, too, is focused on the success of students in the district.

“I’m an advocate for positive change,” he said. “I want to make sure we have the right people to get to the next level. My goal is a 100 percent success rate for all students. I want this district to be as successful as other districts.”

Krizanic mirrored the sentiment of wanting an expansion of the district.

“This pandemic has been stressful for everyone,” she said. “I just want to get back to some sort of normalcy and be able to expand the district and build out our sports facilities.”

Having just graduated, Alhabbal said that he believes there is some ineffective leadership.

“I have experienced the collapse of the district firsthand,” he said. “We have talented students, teachers, coaches, support staff and parents who have become numb to the ineffective leadership of the current school board.”

Alhabbal also said that he primarily wants to get the students inspired again.

“Standardized test scores have fallen, effective programs have been lost, talented staff members are choosing to move to other districts and extracurricular participation is down,” he said. “We were moving in the right direction when I started attending school in the district.

“Students did not want to leave the building after school because they felt like they were part of something larger. I will focus on bringing rigor back to academics, supporting staff and giving students the best opportunities to succeed outside of the classroom.”

Sabbagh said he has a five to 10-year plan if elected.

“We have to build these kids up and allow them to be themselves,” he said. “I have a passion for this community; I am embedded in it; I want to draw people to the community.”

Being proud of the Arabic language curriculum taking off during her tenure on the board, Krizanic said that she is focused on the kids.

“I really love this community so much,” she said. “I don’t play games; my focus is always, always on the kids and what’s best for them.”

Kaminsky said that she has always been dedicated to doing what is best.

“I have always taken pride in what I do,” she said. “I have really worked hard to enhance people’s experiences. I just want to do what I think is right.”

Candidate Mohamad Berri could not be reached for comment.