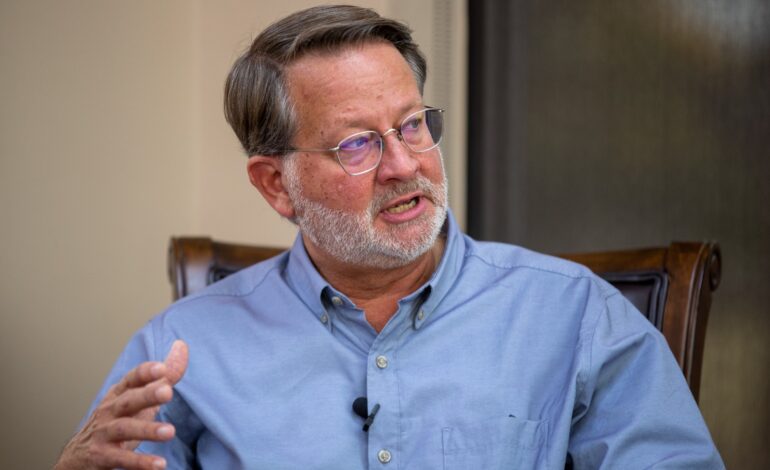 DEARBORN — With the November election now a month away, U.S. Senator Gary Peters is in a race to maintain his seat for another term against conservative, Trump-backed John James.

Several polls, including RealClear and Reuters, puts Peters ahead of James. Peters has a history of direct engagement with the Arab American community, being endorsed by the Arab American Political Action Committee (AAPAC) during his previous Senate race.

AAPAC has endorsed Peters again. In a meeting with AAPAC members at The Arab American News offices last week, Peters spoke of why the upcoming election is so crucial to the Arab American community in Michigan and at large.

National security, border politics and U.S. presence in the Middle East were, of course, central topics. Peters serves as the ranking member of the Homeland Security and Governmental Affairs Committee and is a member of the Senate Armed Services Committee. Peters, like James, comes from a military background, having served in the U.S. Navy Reserve twice.

In his first term, Peters has been recognized for his bipartisanship efforts and a strong record of moving legislation, passing more legislation than any other Senator, Democrat or Republican, in the last two years.

Medicare should be able to negotiate drug prices, that’s just common sense. But, Mitch McConnell won’t put this bill on the floor. A thing that makes no sense to me.

Peters has also focused on pollution, working towards protections for his beloved Great Lakes. A recent EGLE report shows PFAS contamination at the Ford/AK steel Rouge River site. The Arab American News Publisher Osama Siblani brought up this issue during the meeting.

“I’ve had hearings (on the dangers of PFAS),” Peters said. “One of the experts talked about how a few millions years from now, when geologists are looking at the rock strata from our era, you will find PFAS.”

Peters talked of securing extra funding for clean up operations in some of Michigan’s many PFAS sites and talked of constituents he personally had met who were dealing with its ramifications, including cancer. The Trump administration has made these containment efforts more difficult, he said.

Peters has dedicated significant energy on controlling the run-away prices of prescription drugs, partly by allowing generic drugs into the market, offsetting the costs of expensive brand-name drugs.

“A thing that makes no sense to me, and Mitch McConnell won’t put this bill on the floor, is that Medicare should be able to negotiate for prices, that’s just common sense,” Peters said. “Big entities like GM and Ford negotiate cheaper prices with supplies every day. Medicare is a huge customer of drug suppliers.”

The bottom line is that the U.S. should not be providing any intelligence, any aircraft fueling to aircrafts that are on a mission to bring such harm to the Yemeni people

Siblani brought up U.S. foreign policy ventures that have a direct connection to devastation in countries like Iraq, Yemen and Syria, coupled with Israel’s continuing denial of Palestinians right. The U.S. has continued to realize its military and economic interests in the Middle East under both Republican and Democratic administrations.

“I’ve been very outspoken about Yemen,” Peters said. “The humanitarian crisis in Yemen is larger than anything we’ve seen since the second World War.

“I’ve voted to cut-off funding to the Saudi government while this is happening and raised the issue repeatedly in the Armed Services Committee with people in military command positions.

“I aggressively pushed back when I was told by folks in the government and the military that the U.S. does not help Saudis in air strikes that hit Yemeni civilians. Yet in the same breath, they were saying ‘we only provide fuel for the aircrafts’, which is assistance. Well the U.S. should not be assisting in these horrible bombing campaigns.”

Peters said he has never gotten a straight answer as to whether civilian casualties were a result of a concerted effort or sheer incompetence. He said it’s hard to believe there isn’t some targeting involved.

“The bottom line is that the U.S. should not be providing any intelligence, any aircraft fueling to aircrafts that are on a mission to bring such harm to the Yemeni people,” Peters said.

On Palestine, Peters is adamant that Israel’s annexation efforts will not bring the possibility of a two-state solution closer to reality.

“Stability has been an elusive goal in the Middle East,” he said. “We need that stability and the U.S. needs to play a constructive role in it.”

…with President Trump, (someone) that put a Muslim ban forward, which I aggressively fought against, it’s really hard to negotiate with someone that puts in those kinds of policies

Practices such as federal “terrorist watchlist” and discriminatory airport security checks have intensified for Arab Americans in recent years. Peters supports due process and individuals’ rights to know if they are put on such lists, and to be able question that status if they are. He said positive change in these areas are possible with a Democratic president and Congress.

“This has been a big issue for me, and one of the certain you can’t do in a bi-partisan way,” Peters said. “And with President Trump, (someone) that put a Muslim ban forward, which I aggressively fought against, it’s really hard to negotiate with someone that puts in those kinds of policies.”