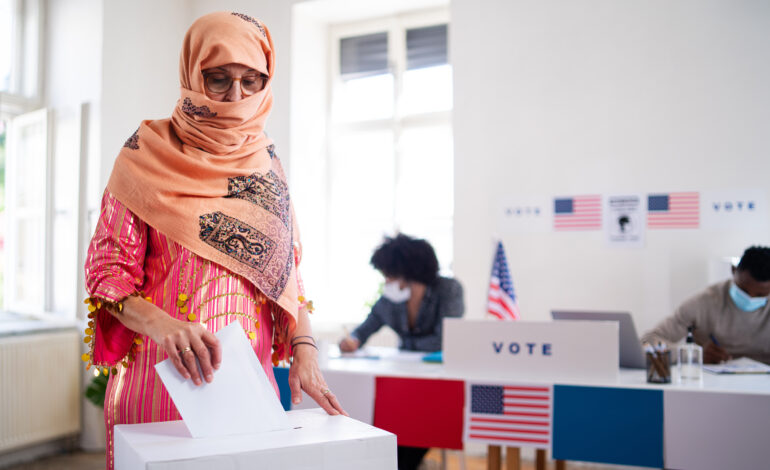 Every year, the comprehensive poll teases out nuances around the political and social values shared by the diverse Muslim American population, and in comparison to other faith groups and the general public. Like always, the poll shows a largely engaged  Muslim population, though political leanings among Muslims may vary.

This year’s poll also shows how these political attitudes and preferences run counter to the perception of Muslims favoring conservative politics due to religious affiliations. The poll also looks at how discrimination remains a presence in the life of many Muslims. A breakdown of some of the key findings of the poll appears below.

The Arab American News spoke to ISPU Director of Research Dalia Mogahed about some of these key finding earlier this week. “One key takeaway from this poll is that American Muslim voter registration has steadily climbed over the past five years,” Mogahed said. “In 2016, only 60 percent of eligible Muslim voters were registered to vote. This year that number is 78 percent.”

Mogahed said this significant climb is a testimony to the efforts of groups pushing GOTV (Get Out the Vote) campaigns and specifically targeting Muslim voters.

Still, 15 to 19 percent of Muslims who are eligible to vote have no intention of voting.

“That’s not insignificant,” Mogahed said. “When this group that does not intend to vote is asked why, the responses are that they don’t like any of the choices, or they don’t think their vote matters. This is the group that has to be engaged in the next chapter of American Muslim development.”

Perhaps surprisingly, the approval of President Trump among Muslims has doubled from 2019, and was right below what Jewish Americans reported, when polled right around the country’s coronavirus lockdowns

Mogahed said, however, that voting is not the only way to gauge civic engagement; volunteering for campaigns, attending political events such as town hall meetings and contributing financially to campaigns make a difference. The poll shows Muslims in these exercises; Muslims are either on par or exceed the general public.

Perhaps surprisingly, the approval of President Trump among Muslims has doubled from 2019, and was right below what Jewish Americans reported, when polled right around the country’s coronavirus lockdowns.

“There are a few possibilities behind this increase,” Mogahed said. “One is a “rallying around the flag” phenomena, where the country is going through some sort of a hardship, like a pandemic, when people might see the leadership more positively.

“The Muslim community is not uniform in their approval of the president and there are stark differences along racial lines within our community,” Mogahed added. “Muslims who identify as White are similar to White Americans of other faith backgrounds in their level of approval.”

50 percent of White Muslims approve of Trump’s performance, compared to non-White Muslims, who reflect perceptions of the president among non-White Americans in the general public. The full poll is now available on the ISPU website at: www.ispu.org