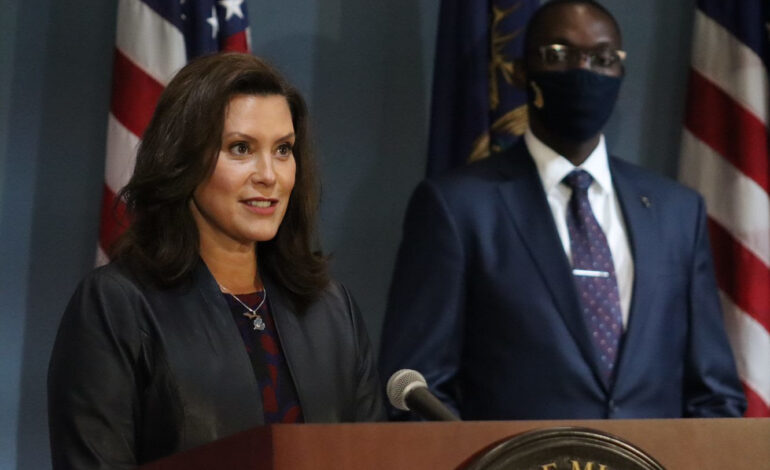 Whitmer says that up to 830,000 Michiganders could lose unemployment benefits if the ruling went into effect immediately. Photo: Office of the governor

LANSING — Governor Whitmer’s administration is asking for clarification from the Michigan Supreme Court after it decided last Friday that her extensions of the state of emergency and subsequent executive orders concerning COVID-19 were unconstitutional.

Whitmer said previously that legally her orders would stay in effect for at least 21 days after the ruling. But an attorney who fought against the administration in court told FOX 2 News this week that the ruling voids Whitmer’s order as of the time the ruling was published.

Whitmer’s administration says it needs clarity from the Supreme Court as to whether the ruling won’t take effect until Friday, Oct. 30.

It also says that if the ruling went into effect immediately, up to 830,000 unemployed Michiganders could lose crucial unemployment benefits. The administration says it need the transition period to work with local health departments and the legislature to work to come up with an alternative safety and economic plan.

“We need this transition period to protect the 830,000 Michigan workers and families who are depending on unemployment benefits to pay their bills and put food on the table, and to protect Michiganders everywhere who are counting on their leaders to protect them,” Whitmer said. “The Supreme Court has spoken, and while I vehemently disagree with their ruling, I’m ready to work across the aisle with Republicans in the legislature where we can find common ground to slow the spread of the virus and rebuild our economy.

“It’s time for Republicans in the legislature to get to work and start showing that they are taking this crisis seriously. They can start by canceling their October recess and getting back to work. Let’s work together and get this done.” Governor Whitmer says that if the ruling went into effect immediately, up to 830,000 unemployed Michiganders could lose crucial unemployment benefits

The administration says it’s reviewing the legals questions raised by the Supreme Court in its ruling.

Attorney General Dana Nessel’s office issued a statement on Friday saying that it won’t be enforcing Whitmer’s orders after the ruling. It did say, however, that local law enforcement had their own independent authority to enforce COVID-19 protections.

The case went to the Michigan Supreme Court after Michigan health care providers and a patient looking for an elective surgery sued the state in federal court. That federal judge wanted input from the state on the constitutionality of Whitmer’s emergency authority and her executive orders.