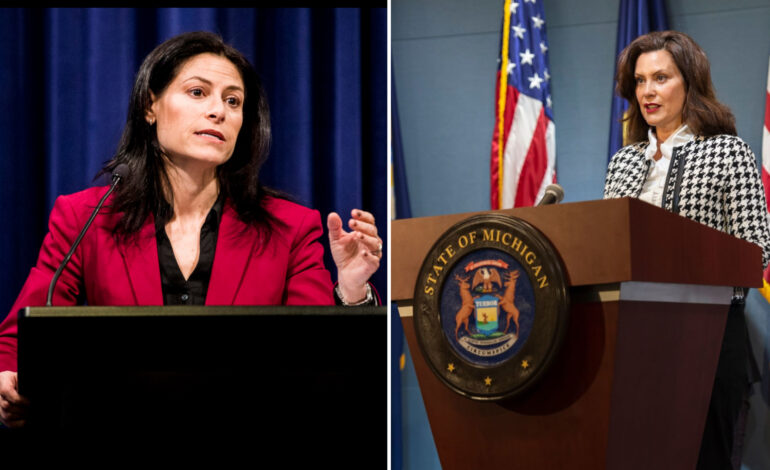 “I’d like to announce that my office has filed additional charges in addition to the charges already announced by the U.S. Attorney’s office,” she said. “I’d like to announce the following preliminary charges pursuant to the Michigan Anti-Terrorism Act against seven individuals, all of whom are now in custody, linked to the militia group ‘Wolverine Watchmen’ and ‘Associates of Wolverine Watchmen.’”

In total, 19 state felony charges were filed by Nessel’s office against the seven individuals, six of whom were also charged by U.S. Attorney for the Western District of Michigan Andrew Birge with separate, federal felony charges as a result of the execution of the warrants.

All suspects are alleged to have called on the groups’ members to identify the home addresses of law enforcement officers in order to target them; made threats of violence to instigate a civil war leading to societal collapse and engaged in the planning and training for an operation to attack the state Capitol building and kidnap government officials, including Whitmer.

Shawn Fix, 38, of Belleville; Eric Molitor, 36, of Cadillac; Michael Null, 38, of Plainwell and William Null, 38, of Shelbyville are charged with providing material support for terrorist attacks and felony firearm.

The charges are subject to change once all evidence obtained through warrants are reviewed and they differ from charges issued at the federal level.

This is more than just political disagreement or passionate advocacy, some of these groups’ mission is simply to create chaos and inflict harm upon others — AG Dana Nessel

Musico and Morrison are expected to be arraigned at 2 p.m. in Jackson County. Fix is in custody and his arraignment is pending in Antrim County.

“There has been a disturbing increase in anti-government rhetoric and the re-emergence of groups that embrace extremist ideologies,” Nessel said. “These groups often seek to recruit new members by seizing on a moment of civil unrest and using it to advance their agenda of self-reliance and armed resistance. This is more than just political disagreement or passionate advocacy, some of these groups’ mission is simply to create chaos and inflict harm upon others.”

Conspiracy to overthrow the government

Federal authorities have also arrested six other men who are accused of conspiring to kidnap Whitmer and overthrow the state government.

In a complaint filed in federal court, authorities announced the charges against Adam Fox, Barry Croft, Ty Garbin, Kaleb Franks, Daniel Harris and Brandon Caserta. All are accused of conspiring to kidnap Whitmer.

All except for Croft are residents of Michigan. Croft is from Delaware.

The complaint also said Croft, Fox and about 13 other men gathered in Dublin, Ohio on June 6. They met to form a society that followed the U.S. Bill of Rights in an effort to be self-sufficient and discussed ways to achieve their goal through violent means and that Whitmer would be taken to Wisconsin for a “trial.”

Fox said he needed “200 men” to storm the Capitol building in Lansing, Michigan, and take hostages, including the governor

The FBI said in its complaint that several members of the group discussed murder or kidnapping.

“Several members talked about murdering ‘tyrants’ or ‘taking’ a sitting governor,” the FBI wrote. “The group decided they needed to increase their numbers and encouraged each other to talk to their neighbors and spread their message. “

The FBI said that Fox also reached out to a Michigan-based militia group and focused on Whitmer.

“Fox said he needed ‘200 men’ to storm the Capitol building in Lansing, Michigan, and take hostages, including the governor,” the FBI said. “Fox explained they would try the governor of Michigan for ‘treason’ and he said they would execute the plan before the November 2020 elections.”

The FBI was already tracking the militia in March, after a local police department learned members were trying to obtain addresses of local law enforcement officers.

“At the time, the FBI interviewed a member of the militia group who was concerned about the group’s plans to target and kill police officers,” the FBI said. “And that person agreed to become a (confidential source).”

The FBI learned of the plot through confidential sources and undercover agents over several months who attended militia group meetings, including field training exercises on private property in remote areas of Michigan, where they would engage in firearm training and tactical drills.

The FBI said Fox called Whitmer a “tyrant b****” and asked the group to be linked with other systems and asked for ideas of what they can do. The FBI also said that the group discussed attacking a Michigan State Police facility and shooting up the governor’s vacation home while detonating IEDs nearby to distract police.

The affidavit was filed hours after a team of FBI agents raided a Hartland Township home Wednesday.

The affidavit includes descriptions of how the conspirators conducted surveillance on Whitmer’s home in August and September.

According to an audio recording quoted in the affidavit, Fox and two other individuals shot video, took photographs and calculated how long it would take local and state police to respond to an incident at the property.

In the plan to kidnap Whitmer, the men stopped at a bridge to determine where an explosive device could be placed to hinder police responding to her home.

“We condemn those who plotted against her and our government,” he said. “They are not patriots. There is no honor in their actions. They are criminals and traitors, and they should be prosecuted to the fullest extent of the law.”

“I’d like to personally thank the law enforcement officers who participated in yesterday’s arrests and those who have assisted with this investigation throughout the past several months,” Nessel said. “Your heroic efforts have left the people of this state safer and the instruments of our government stronger. I know that I speak on behalf of Michiganders everywhere when I say we are forever grateful to you for your actions.” Governor Whitmer hold a press conference from Lansing on Thursday, Oct. 8, after arrests and charges were announced for men who had conspired to kidnap her. Photo: Office of the governor

Whitmer held a press conference shortly after the announcement of charges. She said while she never expected anything like this, she is thankful for the efforts of law enforcement.

“When I put my hand on the Bible and took the oath of office 22 months ago, I knew this job would be hard, but I’ll be honest – I never could’ve imagined anything like this,” she said. “I want to start by saying thank you to law enforcement. Thank you to the fearless FBI agents. And thank you to the brave Michigan State Police troopers who participated in this operation – acting under the leadership of Col. Joe Gasper.

“I also want to thank Attorney General Nessel and U.S. Attorneys Birge and Schneider and their teams for pursuing criminal charges that hopefully will lead to convictions, bringing these sick and depraved men to justice. As a mom with two teenage daughters and three stepsons, my husband and I are eternally grateful to everyone who put themselves in harm’s way to keep our family safe.”

Just last week, the president of the United States stood before the American people and refused to condemn White supremacists and hate groups – like these two Michigan militia groups — Governor Whitmer

She also said that the president’s recent comments regarding hate groups do not help these situations.

“This should be a moment for national unity,” she said. “Where we all pull together as Americans to meet this challenge head-on – with the same might and muscle that put a man on the moon. Seeing the humanity in one another and doing our part to help our country get through this. Instead — our head of state has spent the past seven months denying science, ignoring his own health experts, stoking distrust and fomenting anger.

“And giving comfort to those who spread fear and hatred and division. Just last week, the president of the United States stood before the American people and refused to condemn White supremacists and hate groups – like these two Michigan militia groups.”

“So let me say this loud and clear: Hatred, bigotry and violence have no place in the great state of Michigan,” she said. “And if you break the law, or conspire to commit heinous acts of violence against anyone – we will find you, we will hold you accountable and we will bring you to justice.”

Despite these threats against her, Whitmer said that she will not stop keeping people safe.

“For the past seven months, I’ve made the tough choices to keep our state safe,” she said. “These have been gut-wrenching decisions no governor has ever had to make.

But I want the people of Michigan to know this: As your governor, I will never stop doing everything in my power to keep you and your family safe. You don’t have to agree with me, but I do ask one thing: Never forget that we are all in this together. Let’s show a little kindness. And a lot more empathy. Give one another some grace and let’s take care of each other. We are Michiganders. I know we can get through this. We will get through this, so let’s get through it together.”

Above: Governor Whitmer holds press conference after arrests were announced for individuals who unsuccessfully attempted to kidnap her