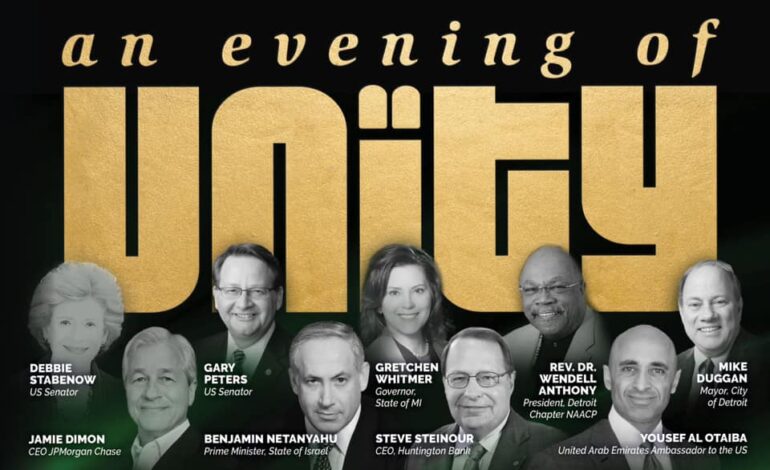 An evening of unity with a racist criminal is shameful

This Sunday, Michigan’s top elected officials will be addressing and attending the virtual event, “An evening of unity”, sponsored by Yeshiva Beth Yehuda, the self-described “oldest and largest Jewish educational institution in Michigan.”

Governor Whitmer, Senator Debbie Stabenow, Senator Gary Peters, Detroit Mayor Mike Duggan and Rev. Dr. Wendell Anthony, president of the Detroit chapter of the NAACP, are some of the high-profile Michigan figures advertised to be featured at the event.

But they are not alone. Also slated to appear is Israeli Prime Minister Benjamin Netanyahu. In light of recent political developments, he will be joined by Ambassador Yousef Alotaiba of the United Arab Emirates, whose nation just signed a normalization agreement with Israel, despite the objections of Palestinians and Arabs everywhere.

We are outraged that any community organization would honor Netanyahu, whose long history of anti-Arab, anti-Palestinian and anti-Muslim racism is clear and well documented. There is nothing about him that screams “unity.”  But what is even more appalling is that politicians and civil rights leaders would see fit to share a stage with such a fascist.

The Arab American community has exhibited deep and consistent support for Whitmer, Stabenow, Peters and Duggan. We have stood with our Black brothers and sisters in their fights against systemic racism. We will not accept this slap in the face.

Netanyahu’s record of deep racism is clear. He decried the participation of Palestinian Arabs in the Israeli electoral process. He has avidly supported Israel’s “nation-state law”, declaring that Israel is “the national state, not of all its citizens, but only of the Jewish people.” He has repeatedly promised the Israeli public that a Palestinian state would never come to fruition on his watch.

Netanyahu has backed and implemented the 15-year-old illegal and inhumane Israeli blockade of Gaza, denying two million Palestinians access to supplies and aid. The United Nations has labeled the blockade “a denial of basic human rights in contravention of international law and amounts to collective punishment.” As a result, the people of Gaza are suffering extreme rates of unemployment, poverty and food insecurity.

(Our) community has exhibited deep and consistent support for Whitmer, Stabenow, Peters and Duggan. We have stood with our Black brothers and sisters in their fights against systemic racism. We will not accept this slap in the face.

Moreover, Netanyahu is an enthusiastic supporter and close ally of President Trump. Their political love affair has led to the further deterioration of any hopes for a just peace for the Palestinians, as Trump has awarded Netanyahu’s racism by moving the U.S. Embassy to Jerusalem, recognizing Israeli sovereignty over the occupied Syrian Golan Heights and proposing the preposterous “Deal of the Century”, which would lead the way for Israeli annexation of the West Bank.

Why would Michigan politicians and leaders share a stage with a foreign leader who is so close to President Trump? Why would they celebrate a prime minister whose racism is so deep and apparent? What is there to praise in this man?

As has become too common, these leaders, who seek our support over and over, accepted this invitation without consulting our community at all. It would be no secret that the Arab American community might find appearing with Netanyahu deeply objectionable. This is not the first time something like this has happened, as we all remember when Governor Whitmer visited Israel in 2019 under a veil of secrecy. Our community did not learn about it until she landed in Tel Aviv, depriving us of any input.

Solidarity with Palestinians not limited to Arab Americans

Solidarity with Palestinians is not limited to the Arab American community. Numerous Black American leaders like Cornel West, Michelle Alexander, Marc Lamont Hill and William Barber have expressed support for Palestinian rights based on morality and justice. After a visit to occupied Palestine, South African Nobel Laureate Desmond Tutu noted, “Their humiliation is familiar to all Black South Africans who were corralled and harassed and insulted and assaulted by the security forces of the apartheid government.” Nelson Mandela once declared, “We know too well that our freedom is incomplete without the freedom of the Palestinians.”

The illegal Israeli occupation of Palestine has endured for more than seven decades. That occupation has been nurtured by discrimination, dispossession, disenfranchisement and oppression. Netanyahu is the latest in a long line of Israeli prime ministers who has fostered these practices and yet he still stands out as particularly racist and offensive.

People of conscience would refuse to legitimize Netanyahu. Those who believe in universal human rights would denounce his racist views. And those who respect the Arab American community would not celebrate a man who proudly denies the rights of others based on their race or religion.

If all of this is not convincing Michigan leaders to condemn Netanyahu’s racist history, they should listen to the Israeli people themselves and what they think of their prime minister. Netanyahu has recently been indicted by Israel court on corruption charges, including breach of trust, accepting bribes and fraud.

How could these leaders stand in “unity” with a corrupt politician who is rejected by his own people, who are demonstrating in the streets of Tel Aviv daily against his right wing Israeli government?

They owe it to their constituents and the integrity of the offices they hold to reconsider and disassociate with Netanyahu before it is too late.