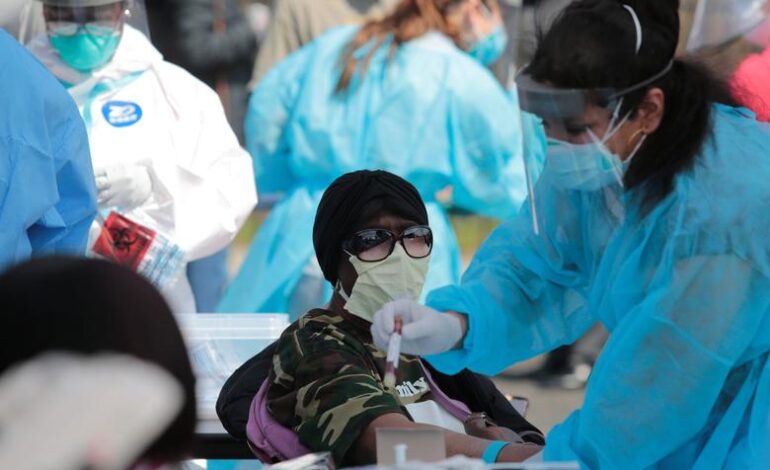 Expanded testing in hard-hit cities like Detroit, with a majority population of Black Americans disproportionality affected by the virus, began early on during the pandemic. Photo: Rebecca Cook

LANSING — A Politico analysis of responses to the COVID-19 pandemic in the U.S. by various state governments shows certain states stand out in their approaches to public health, mass unemployment and school reopenings.

Politico reporters looked at the states’ responses by consulting various health researchers, academic experts and public officials. They found that a handful of states, including Michigan, set standards for response that other states followed.

At the pandemic’s outset, President Trump allowed the states to handle response to the virus on their own. Politico says “some states acted aggressively to contain COVID-19, others far less so.”

Michigan is ranked as a top state for closing racial disparities in its response to the pandemic. It became apparent early on that the virus was disproportionality affecting minority populations due to a mix of socioeconomic factors, such as longstanding inequities in the health care system.

In March, Black residents in Michigan accounted for more than 40 percent of COVID-19 deaths and 29 percent of cases while making up just 14 percent of the population. The state soon created a task force to address this disparity.

The task force expanded testing in communities of color, with accessible walk-up and pop-up testing sites and testing fleets at places like parks. Populations that were vulnerable to the virus, such as those in nursing homes, homeless shelters and prisons, got extra attention. The state became one of the first states to test every prisoner within 15 days.

Governor Whitmer and Lt. Governor Gilchrist announced in late September that the task force made significant progress toward reducing the disparate impact COVID-19 has had on communities of color. On Sept. 28, the state announced that Black residents accounted for only 8.2 percent of cases and 9.9 percent of deaths. A three dimensional map of the United States, highlighting which states did the best in their responses to COVID-19. Image courtesy: Politico

“We’ve done a lot, and the result that we’ve seen over the last couple of months is that we have flattened the disparity in the mortality rate,” Gilchrist told Politico. “It speaks to the power of focus and prioritization.”

“Michigan, I think, is impressive because they created that task force on racial disparities early on,” said Heather Howard, director of the State Health and Value Strategies program of the Robert Wood Johnson Foundation and the former state health commissioner in New Jersey. “And a clear focus of the task force has been incorporating equity into the long-term recovery from the pandemic.”

The state’s COVID-19 reporting platform does break down cases by Hispanic/Latino and Arab ethnicities. Arabs constitute 5 percent of the total cases of the virus in the state, and 2 percent of deaths.

Wayne County has been a hot bed of COVID-19 since the pandemic broke out in the state. Local officials have warned of a concentration of cases in Dearborn. Wayne County breaks down cases by racial categories found on most official government forms, such as the census, which do not include Arab as a racial category.

As of Thursday evening, the Wayne County COVID-19 Dashboard shows Dearborn leads every other community in the county at 2,933 cases. Dearborn Heights falls just below Canton at 1,228 cases. Though Dearborn leads in cases, Livonia has the most deaths from the virus, at 181 deaths, with Dearborn coming in second at 121 deaths. The data excludes the city of Detroit, which has its own health department.