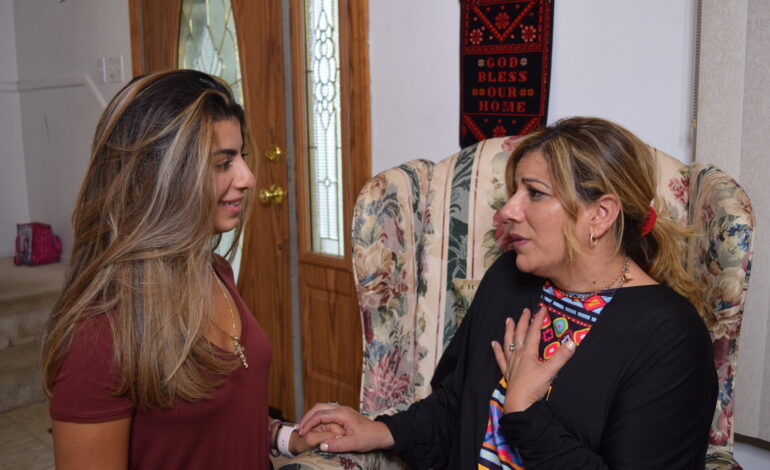 Melissa and Rozana Ansara in an Arab Xpressions skit about the word "kharaf." The skit was produced in collaboration with the Michigan Center for Contextual Factors in Alzheimer’s Disease (MCCFAD). All photos courtesy of Michael and Nicolas Nunu

DEARBORN — The Michigan Center for Contextual Factors in Alzheimer’s Disease has teamed up with Arab Xpressions at the University of Michigan (U of M) to bring a unique skit that explores how a medical word for dementia is often misused in the Arab community.

The COVID-19 pandemic has caused the center to hold these events over Zoom.

Arab Xpressions is an annual performance put on by the Arab Student Association at U of M, with the help of Arabesque and other Arab student organizations on campus. The show is a display of the unique and diverse regional cultures within the larger Arab community.

The Arab American News spoke to MCCFAD members and the creative team at Arab Xpressions about the significance of the skit, specifically the term “kharaf”, the technical term in Arabic for medical diagnosis of dementia.

Applications of the word, such as kharfaneh/kharfan, are often used as a dismissive and disrespectful way to convey that someone has “lost their mind” when they display common symptoms of dementia and or Alzheimer’s Disease, such as confusion, spatial disorientation and memory issues.

Through the skit, MCCFAD and Arab Xpressions aim to inform the community of the proper use of the word and to delink it from its disrespectful and inaccurate common usage. The efforts goes along with MCCFAD’s overall project to promote scientific knowledge and defeat stigmas around the disease in the community.

MCCFAD Director Dr. Kristine Ajrouch said the need for the skit arose after a MCCFAD community event in February, where the Arabic word for dementia was displayed, which an audience member found insulting.

“There was a huge debate that ensued and many in the room were upset,” Ajrouch said. “So we finally told them, ‘don’t worry, we’ll come up with another word to use’ and everyone calmed down.

“As a center that is committed to advancing resources and knowledge about Alzheimer’s Disease and related dementias, we felt that part of our charge was to bring a kind of comfort to using a medical term or clinical terminology. The negative meaning attached to this word requires that we begin to re-think community understanding of dementia, and the way in which we talk about it.” The skit’s actors from left to right: Rozana and Melissa Ansara, Nicolas and Rania Nunu

Bringing the idea to life

A MCCFAD Community Advisory Board member recommended brothers Nicolas and Michael Nunu, actors and creative director at Arab Xpressions, to prepare a skit around the subject. Nicolas is featured in the skit, which he wrote, directed and produced with Michael, with input from the board.

“Michael and Nicolas really brought the idea to life,” Ajrouch said. “It was amazing to see.”

As part of its service to the community, MCCFAD wants to draw attention to the situations in which the word is used and how it needs to be redefined, given the fact that Alzheimer’s Disease is likely going to become much more prevalent in the community.

“It needs to be something we can talk about,” Ajrouch said. “If you can’t even say the word, then how can you begin to start to address some of the challenges that come with the likelihood of getting Alzheimer’s?”

People that suffer from that disease also have to suffer the stigma that’s present in the community. We are glad we get to do our part in this way to reduce that stigma — Nicolas Nunu

Nicolas Nunu, who is earning a masters degree in biomedical engineering at U of M, said the word kharaf was not a word the brothers were familiar with before working with MCCFAD on the skit.

“The word sounded a lot like how the word ‘retard’ is used in English,” he said. “Michael and I worked at a Special Olympics summer camp in Pennsylvania and I am disturbed when that English word is used negatively. I now have similar emotions around ‘kharaf’ and want to help reduce the stigma around Alzheimer’s Disease.

“People that suffer from that disease also have to suffer the stigma that’s present in the community. We are glad we get to do our part in this way to reduce that stigma.”

“In terms of writing the script, we met with Donna Jawad (MCCFAD’s community outreach coordinator) and Kristine and they had a vision for the skit,” Michael Nunu said. “Nick and I started brainstorming from there and it really came to life through our discussions.

“We underwent a lot of revisions and this really was the work of a lot of people. It was a collaborative effort across many days and many (voices). While we got expertise from MCCFAD, Nick and I tried to focus on the creative aspects, working with various angels and tried to make sure every shot captured the essence of the moment and evoked the message we were trying to convey.”

Michael Nunu is a junior studying movement science within the School of Kinesiology at U of M. Besides Nicolas Nunu, Melissa and Rozana Ansara, and Rania Nunu act in the play.

The play can now be viewed on MCCFAD’s YouTube page. The MCCFAD “Stigma and Dementia” live event can be viewed on the center’s Facebook page at facebook.com/MCCFAD

Above: An Arab Xpression skit about the word “kharaf”, presented in collaboration with MCCFAD