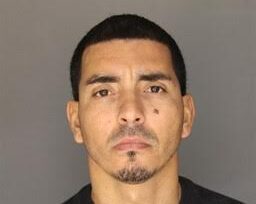 Luis Angel Berrios-Rosario, 38-years-old, of Detroit, has been charged in connection with the shooting. Photo: Dearborn Police

DEARBORN — Luis Angel Berrios-Rosario, 38-years-old, of Detroit, has been charged in connection with a road rage incident that occurred in Dearborn on Sunday.

Berrios-Rosario has been charged with assault with intent to murder, assault with intent to do great bodily harm, discharge of a firearm from a vehicle, felonious assault and four counts of felony firearm. He was arraigned in 19th District Court Thursday and received a 100,000 cash bond. His probable cause conference is on October 30. According to the Dearborn Police report, at around 5:40 p.m., Aboudy Elhadi was driving westbound on Warren between Chase and Greenfield in Dearborn, when he said he noticed someone in his rearview mirror had been driving erratically.

“He was driving crazy,” Elhadi told The Arab American News. “He was driving all over the road, cutting people off and people were honking their horns and everything. Then he cut me off and I thought to myself, ‘you need to get a picture of this guy’s face to get him off the streets.’”

That’s when Elhadi said he pulled up next to an early 2000s green Honda Accord and rolled his window down to start recording.

“I really thought this guy was drunk or on drugs,” he said. “When I pulled up I said to him that he needed to slow down and he started cussing at me and was waving his gun at me. The next thing I knew he was shooting at me and all I could do was duck.”

Elhadi said that the suspect had been dressed as someone in the military or a security guard.

“He was ready,” he said. “He was ready to shoot at anyone that day and I’m just glad that I’m alive.”

The Dearborn Police Department said that a tip led to the arrest.

“I feel safe again,” Elhadi said. “Thanks to the Dearborn police, I can go to work and not be scared. I left my country and came here because it was safer. I’ve never experienced this before and I got very lucky.”

Elhadi also said he thinks everyone should be more alert when they are driving.

“Take photos, take videos, report reckless driving to the police when you can,” he said. “These people need to be off the streets for our community to be safer. I almost got hurt, but I did what I had to do and now no one else will get hurt, either.”

Dearborn police issued a press release in response to the arrest.

“As a result of our excellent partnership with local media outlets and with the cooperation of concerned citizens, a swift arrest was made and our communities are safer,” the release said.