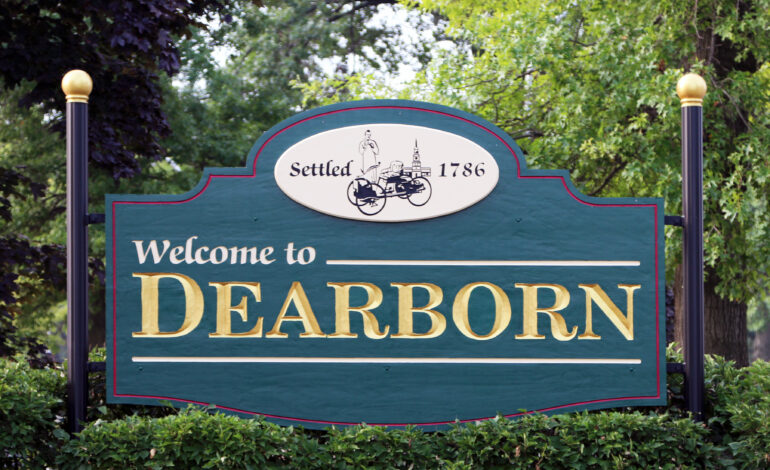 Accountability for Dearborn addresses racism in the community and presents data on racial targeting by police. Photo: James R. Martin

DEARBORN — Accountability For Dearborn (A4D) has turned to the City Council to address racial segregation in Dearborn while also releasing police records for the last decade.

Having submitted a Freedom Of Information Act (FOIA) request almost three months ago, A4D announced that it had finally received the information it had requested regarding citations and arrests disaggregated by racial demographics. “The data include citations issued by each officer, including the racial breakdown,” a press release provided by A4D said. “Several DPD officers exhibit a strong pattern of racial targeting.

How is anything supposed to change when we have city officials here that are obstinately barring citizens from data about their own city? – Priscilla Jenkins, A4D

During an Oct. 6 City Council meeting, several members of A4D spoke during public comment, a week before the data was released.

“How is anything supposed to change when we have city officials here that are obstinately barring citizens from data about their own city?” A4D member Priscilla Jenkins said. “Council members, there’s a real problem happening and it’s sitting in some pile on Chief Haddad’s desk, apparently.”

City council meetings: What went down

Police Chief Ron Haddad told The Arab American News that his department is dissecting the information.

“We are looking through the same data ourselves,” he said. “We want to make sure our information is accurate and transparent. We are not prepared to give a statement at this time.”

At the beginning of the public comment section of the Oct. 20 meeting, Corporation Counsel Debra Walling was asked to provide information regarding the procedures of the meeting.

“Recently during public comments, some speakers have raised the issue of being muted,” she said. “A Council meeting is a limited public forum. It’s considered by the courts to be a limited forum to where the Council can actually control the content of the meeting, even with respect to participants of the public. They can control the content and limit it to agenda items.”

“Your Council rules allow each speaker three minutes to speak to an agenda item prior to the Council’s vote,” she said. “And your Council rules indicate that any items of new business or that want to be brought forward that are not on the agenda has to be put in writing.

“They don’t provide for public comments about anything and everything at the end of your meetings. With respect to muting, I liken that to ejecting someone from a meeting, basically, which the courts uphold when people don’t obey the rules. And one of the most fundamental rules is the relevance rule.”

With tensions still being high from the Oct. 6 meeting, Walling also said that the Council has the right to conduct an orderly meeting.

“The council is well within their rights to prohibit abusive, aggressive, provocative speech,” she said. “It is the Council’s business meeting.”

Council President Susan Dabaja said during the meeting that while public comment would continue as it had previously, the Council may decide to revisit the topic at a later time.

Beth Bailey, a member of the A4D administrative team, said during the meeting that anti-Black racism in Dearborn needs to be dismantled.

“What’s baffling to me is when myself and my friends with A4D are accused of creating division by pushing these conversations,” she said. “Many of us are here to reveal the harm so that healing can begin.”

After a few other residents and members of A4D spoke, Dabaja announced that she saw no other hands raised and that the meeting was being called to an end as a result.

Meetings on Zoom have a virtual “raise hand” feature that alerts the host of the meeting that you have something to say, but only the host can see if anyone has their hands raised.

A4D, however, said in a press release that it was notified by at least 10 individuals who had their hands raised and were ignored.

Dabaja told The Arab American News that she did not see any additional virtual hands being raised.

Bailey, who submitted the FOIA request, told The Arab American News that her goal was to understand the way policing worked in the city.

“I have lived here for seven years and the death of George Floyd and all of the media surrounding the events over the summer made me realize that I didn’t know the police force of my own city,” she said. “We are looking for accountability and everyone to recognize the impact and take steps to reduce the harm being done.”

“I find it convenient that they weren’t called on the same day that the data was released,” she said. “It’s no coincidence. Everyone deserves full transparency. I’m sure there are a lot of people like me who don’t feel safe driving through Dearborn and we need to advocate for better forms of public speaking.”

I detest when people are described by their ethnicity. People shouldn’t be defined by that – Dearborn Police Chief Ronald Haddad

Bailey said that the Council’s lack of response and availability is concerning.

“Council doesn’t make themselves available in many ways,” she said. “These meetings are where we can go to have our voices heard. We want each person in Dearborn to feel empowered to look at this data and come to their own conclusions. The city should be questioning and addressing this.”

Haddad said that he is determined to get to the bottom of all of this.

“I detest when people are described by their ethnicity,” he said. “People shouldn’t be defined by that. We are working to dissect all the data ourselves as well and we will make full disclosure, I am hoping, by the end of next week. We will do so while also addressing all concerns.”

A4D will be hosting a series of town hall meetings to present the data beginning on Nov. 21 to occur every third Saturday of each month for four months at 6 p.m.