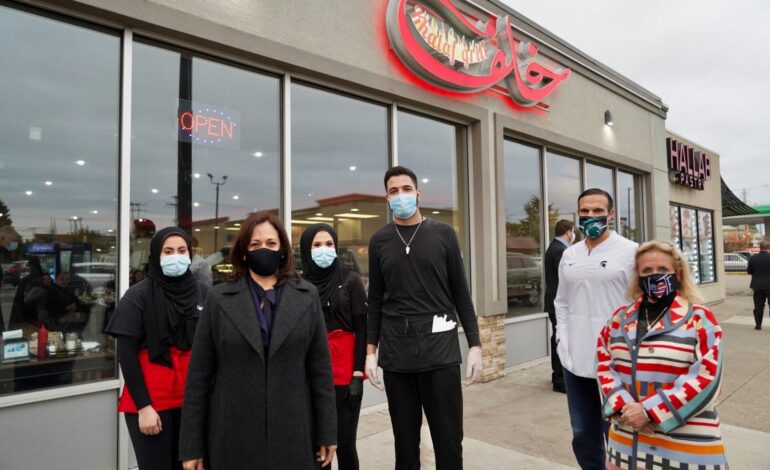 DEARBORN — Democratic vice presidential nominee and California Senator Kamala Harris visited Metro Detroit last Sunday, making a notable, unannounced stop in Dearborn to grab dinner at the Khalaf Grill. The visit by Joe Biden’s running mate was just one of several visits by both prominent Democratic and Republican candidates in the last few weeks ahead of the critical upcoming general election.

Michigan is often considered a battleground state in presidential elections and Harris’ visit to garner support from mostly Arab American voters in Dearborn is a testament to their importance in this election. As such, Harris agreed to an exclusive Q&A with The Arab American News this week. The correspondence below occurred via email.

With Nov. 3 just over the horizon, what is the importance of the Detroit area for the upcoming election?

Detroit, with all of its diversity, reflects America’s heritage as a nation of immigrants where, at our best, people from all races, faiths and backgrounds can come together to build a better future. In this election, winning—and winning big—in Detroit could make the difference in Michigan, and winning Michigan could make the difference in this presidential election. In 2016, Donald Trump won Michigan by a margin that averaged out to just 2 votes per precinct. So every vote counts. Your vote is your voice and your voice is your vote. So, don’t let anyone take your power. You, the people, have the power to choose a better future for your family, your community and our country. The metro Detroit region, like California, has a significant and historic Arab American presence. Many Arab voters come out in droves for Democratic candidates, though Arab Americans enjoy a diversity of political affiliations. Please talk of your past and present relationship with the Arab American community.

My parents immigrated to this country from India and Jamaica and I was raised to believe in the promise of America as a nation of immigrants. Throughout my career, I have fought to defend the rights of communities of color and immigrants, including Arab Americans. In my first speech on the floor of the Senate, I spoke out against President Trump’s attacks on immigrants, including the Muslim ban, and said that part of what makes America a great country is our history as a nation built by immigrants. This includes the contributions of the diverse Arab Americans in the Metro Detroit region.

Joe and I will uphold that same commitment to immigrants if we win the White House. On day one, we will rescind the un-American Muslim travel and refugee bans and bring an end to the outrageous and immoral family separation policy. We will also raise the annual refugee admissions target to 125,000; protect Dreamers and their families and reverse the public charge rule so we can make sure that permanent resident status isn’t contingent on household income. And we will protect civil rights and root out systemic racism across our society, confronting discriminatory policies that target Arab Americans and cast entire communities under suspicion.

Many Arab voters in Dearborn and Hamtramck hold foreign policy issues important, particularly the Israel and Palestine conflict, Syria, the war on Yemen and others. What can a Biden presidency mean for lasting peace and demands for human rights in the Mid East region? Could we see an end to continued U.S. military engagements in the region?

Joe and I are committed to helping the people of the Arab world meet the challenges they face. The United States cannot dictate the outcomes in other countries, but we do have a responsibility to advance human rights and democratic principles on behalf of all people. We have an obligation to promote universal values and work toward a more peaceful and secure world.

Joe and I also believe in the worth and value of every Palestinian and every Israeli and we will work to ensure that Palestinians and Israelis enjoy equal measures of freedom, security, prosperity and democracy. We are committed to a two-state solution, and we will oppose any unilateral steps that undermine that goal. We will also oppose annexation and settlement expansion. And we will take immediate steps to restore economic and humanitarian assistance to the Palestinian people, address the ongoing humanitarian crisis in Gaza, reopen the U.S. consulate in East Jerusalem and work to reopen the PLO mission in Washington.

In Syria, Joe and I will once again stand with civil society and pro-democracy partners in Syria, and help advance a political settlement where the Syrian people have a voice. We will work to protect the most vulnerable Syrians and lead the global coalition to defeat ISIS. And instead of standing by as the government of Saudi Arabia pursues disastrous, dangerous policies, including the ongoing war in Yemen, we will reassess the U.S. relationship with Saudi Arabia and end support for the Saudi-led war in Yemen.

What would a Biden/Harris administration do about discriminatory practices such as targeted detainment and questioning of Arabs at airports and ports of entry, or “watch lists” that forgo due process and basic protections under the law?

Discrimination and bigotry will have no place in a Biden-Harris administration. On our first day in office, Joe and I will rescind the un-American Muslim travel and refugee bans and make America, once again, a welcoming destination for immigrants and refugees, including by raising the refugee admissions cap. And in a Biden-Harris administration, the Department of Homeland Security will review “watchlist” and “no-fly list” processes to make sure that they are not discriminatory and improve the process to remove names, when justified, from these lists.

Finally, Democrats often promise “a seat at the table” for previously marginalized and underrepresented people. Could you speak on what that would entail if you are elected to serve the country as vice president.

Right now, we’re facing several urgent crises at once, from a pandemic, to a recession, to a changing climate and a long-overdue reckoning about the way our country has treated Black and Brown communities. Joe and I recognize that the contributions of Arab Americans are essential to helping overcome these challenges. We also intend to have an administration that looks like America — and reflects the diversity of our country, including Arab Americans, at the most senior levels of government. And we’ll make sure our government engages Arab Americans on all of the issues that affect their lives through the White House Office of Public Engagement, and open the doors of the White House to Arab Americans through events like the White House Eid celebration.

Our campaign demonstrated our commitment to engaging Arab Americans by launching an Arab American agenda on our website and hiring a deputy coalitions director focusing on Arab American engagement in Michigan. Dr. Jill Biden and I also recently visited Arab Americans in Dearborn. And if elected, we will show the same commitment to outreach and engagement in the White House as we seek to restore America’s leadership around the world, including by appointing a special envoy to the Organization of Islamic Cooperation, which includes many Arab countries.