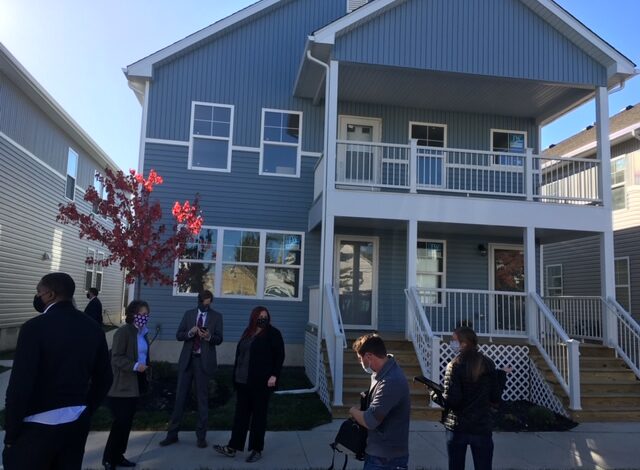 One of the three two-family homes constructed in Hamtramck to give refugees and asylees temporary accommodation and services towards resettlement. All photos provide by Paige Long

HAMTRAMCK – A unique refugee resettlement program in Hamtramck that has seen support from a variety of partners, including a Dearborn church, began operations this year.

The program gives safe haven to six families that have earned refugee status or been granted asylum in three two-family homes built on four vacant lots in Hamtramck’s Yemeni-populated southern end. The lots were previously owned by the Wayne County Land Bank, Michigan Land Bank Fast Track Authority and the City of Hamtramck.

The idea is to give new Americans access to transitional affordable housing as they begin the tough process of becoming economically stable in a new land. The program leveraged resources from partner organizations that will assist them with job training, school readiness, and eventually, pursuing permanent homeownership opportunities.

St. Paul Lutheran Church of Dearborn raised $5,000 for the interior furnishings of one of Freedom Village’s six flats, and has provided other services for the families. Steven C. Flum, Inc., a Hamtramck-based architect designed the duplexes with Interior Designers Coalition for Change designing unit interiors. Furnishings were acquired through partnerships with Loves Furniture and Ikea. We’ve long been a haven for immigrants. This city is a manifestation of the ideals America was built on and a place of opportunity – Hamtramck Mayor Karen Majewski

With a 70-year history, the Christian non-profit Samaritas, as the largest refugee resettlement organization in the state, facilitated the referrals of these new American families to live in Freedom Village. Samaritas also coordinated the furniture included in each unit and worked on a welcoming exterior for the homes in collaboration with community partners and sponsors.

Samaritas will also provide support services based on the individual needs of the family as they transition from leasing space at Freedom Village to more permanent housing. St. Paul is assisting with this overall operation.

“Our passion is really with the mission of Samaritas’ New Americans program – to bring refugees into the community and assist them assimilating into the melting pot which is the United States,” said David Ippel on behalf of St. Paul. “We assist with the delivery of groceries obtained from Forgotten Harvest and Gleaners, have hosted drives to collect personal hygiene items and household supplies (items not covered in their core cash allotments), and have helped move families and their furniture.”

The congregation has also donated masks throughout the pandemic, funded the purchase of winter coats and provided other clothing items and furniture for the families. St. Paul Lutheran Church of Dearborn raised $5,000 for the interior furnishings of one of Freedom Village’s six flats, and has provided other services for the families

Hamtramck has the highest percentage of immigrants and refugees of any city in Michigan, at nearly 44 percent. For decades, it was largely a Polish community, and in recent years, large populations of immigrants and refugees from other Eastern European countries, South Asia, and the Middle East have settled within its 2 square miles. Some 30 languages are spoken by residents and at least four different religions are practiced.

Hamtramck Mayor Karen Majewski has been an enthusiastic proponent of the program.

“We’ve long been a haven for immigrants,” said Majewski. “This city is a manifestation of the ideals America was built on and a place of opportunity.”

Data also shows that immigrants make up 16.3 percent of the county’s business owners and entrepreneurs, and 63.5 percent of them own their own homes. These new Americans contributed more than $10.5 billion to Wayne County’s GDP in 2017, including $430.5 million to Social Security and $110.6 million to Medicare. Because of the growing community, 7,500 manufacturing jobs were preserved in Wayne County.

This initial round of families being resettled at Freedom Village are from Somalia, Afghanistan, South Africa, and Democratic Republic of Congo.

“We are a welcoming county that derives our strength from the diversity of our residents, and the Freedom Village project epitomizes that core value,” said Wayne County Executive Warren Evans.