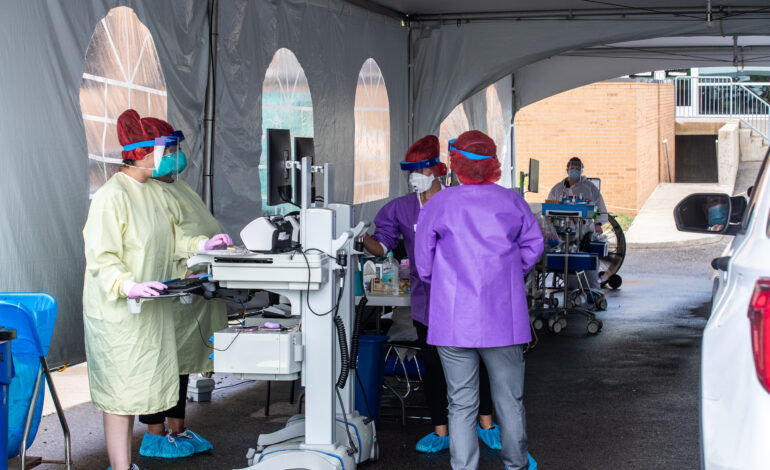 DEARBORN — With COVID-19 cases on the rise, hospitals nearing capacity and growing frustration over health orders, some local doctors want to remind residents to take the pandemic seriously. “There are people suffering, people dying,” he said. “The people that are really suffering are commonly those with other medical ailments. That’s with every disease, healthy people do seem to recover better and faster.”

Shamoon also said he recommends his patients take better care of themselves.

“Stop smoking, start exercising and eat healthy,” he said. “Regardless, you have an obligation to take care of yourself and to protect yourself. I know everyone just wants to get over it, but I don’t think getting over it and moving on is the right way to go.”

“People are waiting far too long to get checked out and to be treated and are dying as a result,” he said. “We do a lot of screening and keep COVID patients separated. All personnel are wearing protective gear. But people are waiting to treat not just minor things, but critical symptoms of heart attack and stroke as well. And people are dying.”

Dr. Ali Dabaja, an emergency room and critical care doctor at Beaumont Dearborn, said that he’s never seen anything like this before. “I’ve been in medicine over 10 years,” he said. “I worked through the H1N1 virus among others, and I have never seen anything like this before. This is nothing like the flu and to be honest, we are treating any cold as if it were COVID as this is new to us. Until there is a vaccine or a cure or we become immune to it, we have to be cautious.”

With the death toll rising, Dabaja said people need to monitor and take better care of themselves.

“Yes, a vast majority will recover and that’s great, but there is still a significant amount of people dying,” he said. “There are no studies that have really proven any vitamins or medications to be effective. People need to take better care of themselves and monitor their symptoms.”

Dabaja said he believes that the slow of the spread over the summer provided a reason for people to not take it as seriously.

“Because of the calm over the summer, a lot of people started believing that this isn’t really that bad,” he said. “Yes, there are even medical professionals that are downplaying the severity of this. We are still seeing bad things and we are worried. People are fatigued by wearing masks, but it needs to be reinforced.”

“In the Arab American community, we have large gatherings, but it’s a mistake,” he said. “We should not be doing these things. We are putting a lot of people at risk and it’s ridiculing and like slapping us in the face. Stop the gatherings. This is not political, take the red and blue out of it, take the election out of it and realize that people are dying.”

Nahed Faraj, a registered nurse at Beaumont Dearborn, said this is an emotional battle for nurses.

“It’s stressful and it’s concerning seeing people die every shift you work,” she said. “I’m worried about bringing something home to my family every day. As soon as I get home, my clothes go straight in the washing machine and I go straight to the shower.”

Faraj said that there is no tolerance for people to not wear a mask.

“It’s selfish to be so careless,” she said. “This is not a joke. Until people see it first hand, unfortunately they aren’t taking it seriously. Arab Americans believe in large gatherings, we view family to be number one, but we have to be careful, we don’t want these numbers to keep getting out of control.”

Faraj also said that despite several invites, her family has not attended any gatherings since March.

“We have to take care of ourselves and our families,” she said. “It’s hard not seeing them, but we have to do our part to stay safe.”

With visitor limitations being imposed at most area hospitals, Faraj said that’s one of the hardest parts.

“We are not our patient’s families,” she said. “With them not being able to see their family and not knowing if they will again, it’s hard. I’ve helped people video call their family and tell them that they may need to be intubated and they don’t know if they will make it. I come home crying every day. It’s stressful and it’s emotional and it is so hard to see this happening. New nurses are being discouraged and quitting, and students are quitting their programs. If we don’t do what we need to do, we will all fail and this will be for nothing.” Fernando Olvera, 26, a medical school student, helps Efrain Guevara, 63, who has been hospitalised with COVID-19, get up from his hospital bed at United Memorial Medical Center in Houston, Texas, July 17. Photo: Callaghan O’Hare/Reuters

“People are being reckless”

Yes, we have seen epidemics before. But I’ve never experienced anything like this. Nothing I’ve seen has been as contagious as this – Dr. Mohamed Moussa

Dr. Mohamed Moussa, an attending physician for seven years, said that while he worked through Ebola, that was completely different.

“Yes, we have seen epidemics before,” he said. “But I’ve never experienced anything like this. Nothing I’ve seen has been as contagious as this.”

With the growing frustration of the mask mandate and many people believing that they don’t really help, Moussa said that’s false information.

“It’s frustrating, we wear masks every day, all day long,” he said. “They work and they are effective and honestly, it seems like this anti-mask belief is politically motivated.”

Having survived having COVID himself, Moussa said that masks save lives.

“We don’t know enough about this disease and it’s not just about you, it’s about other people,” he said. “People are worried but they aren’t doing enough to protect themselves. The worst part is you could still have it and not have any symptoms. People are being reckless. The scariest part about this disease is the varying symptoms and the severity.”

While Moussa recommends not gathering for the holidays, he said it’s important for those that do to take precautions.

“If you plan on gathering, quarantine first, get tested at the end of the quarantine,” he said. “If you go, wear a mask and try to social distance.”

During his own experience with COVID, Moussa said it was really hard for him to get through.

“I had it at the end of April, but even before that I was quarantining at home away from my family,” he said. “I didn’t touch or hug my wife or kids for months, I stayed far away from them. It’s tough and you don’t realize how much that bothers you until you go through it. There’s just still so much that we don’t know. We have to be careful and protect ourselves and others.”