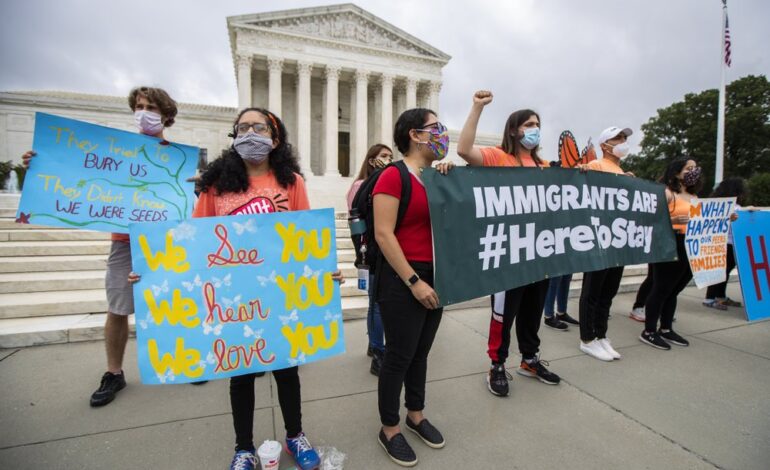 In a rebuke to President Trump’s administration on Friday, a judge ordered the U.S. government to reopen to first-time applicants a program that protects from deportation and grants work permits to hundreds of thousands of immigrants who live in the United States unlawfully after arriving as children.

The action by U.S. District Judge Nicholas Garaufis in Brooklyn centered on the Deferred Action for Childhood Arrivals (DACA) program created by Trump’s Democratic predecessor, Barack Obama, in 2012. The Supreme Court blocked Trump’s 2017 bid to end DACA in June. His administration, however, continued its policy of not accepting new applications for the program.

Democratic President-elect Joe Biden, who takes office on Jan. 20, has said he plans to revitalize DACA.

Garaufis directed the Department of Homeland Security to post a public notice “displayed prominently” on its websites by Monday announcing that it is accepting new DACA applications. The judge also ordered that the notice make clear that employment authorization under DACA would last for two years rather than one.

The Supreme Court decided that the administration’s attempt to end DACA was “arbitrary and capricious” and violated federal law. Following the ruling, acting DHS Secretary Chad Wolf issued a memo in July that continued to block new applications to the program while he subjected it to a “full reconsideration.” The memo also limited employment authorization to one year and curtailed recipients’ ability to travel outside the United States.

Garaufis found in November that Wolf had been unlawfully appointed to his post, meaning he did not have the authority to issue the July DACA memorandum.

The DHS did not immediately respond to a request for comment.

Trump’s administration had argued that Obama exceeded his constitutional powers when he created DACA by executive action, bypassing Congress. Obama created DACA after Congress failed to pass bipartisan legislation to overhaul U.S. immigration policy. DACA recipients often are called “Dreamers”, based on the name of legislation considered but never passed in Congress.