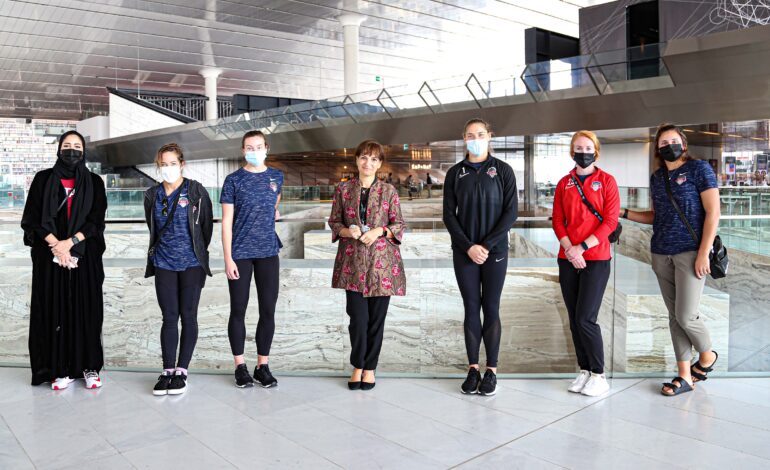 Members of the Washington Spirit Soccer Team in Doha, Qatar. All photos courtesy of the Qatar Foundation

“Qatar Museums is proud to kick off the Qatar-USA 2021 Year of Culture by welcoming the Washington Spirit Women’s Soccer team to Qatar,” said Sheikha Al Mayassa bint Hamad bin Khalifa Al Thani, chairperson of the Qatar Museums. “Their visit to Doha further affirms the longstanding ties between Qatar and the United States, and we look forward to sharing Qatar’s rich culture and heritage with our American friends.”

During the trip, the team from Washington took a tour of the Qatar Foundation (QF), including a meet and greet with students from one of the QF’s schools and the QF girls’ football team, and visits to the Al Shaqab equine and equestrian center and the Qatar National Library.

The team also visited several landmarks, ceremonies, clinics with aspiring soccer players and the final match for the Amir Cup.

Launched in 2012, the Spirit play in the National Women’s Soccer League, the premier women’s soccer competition in North America

“We are delighted to be here and to be part of this event,” said Steven Baldwin, owner of the Washington Spirit. “Sports has a way of bringing people together and we are excited to be part of this cultural exchange. We thank the people of Qatar for warmly welcoming our team of fantastic female athletes to share their culture and the progress of the 2022 World Cup preparations with us.”

The Washington Spirit is the professional women’s soccer team based at the Maryland SoccerPlex in Germantown. Launched in 2012, the Spirit play in the National Women’s Soccer League, the premier women’s soccer competition in North America.

“The Washington Spirit is not only a team at the top of its game, but an example to girls in Qatar and the U.S. of the explosive potential of empowered women,” said H.E. Sheikh Meshal bin Hamad Al Thani, ambassador of the State of Qatar to the U.S. “They have so much to offer both on and off the field, and it is why I wanted to invite them to Qatar as the first Qatar-USA 2021 Year of Culture educational exchange group.”

The Year of Culture is executed through various exhibitions, festivals, competitions and events that are intended to increase mutual understanding and appreciation between the respective nations while inviting people to explore their historical similarities and differences.