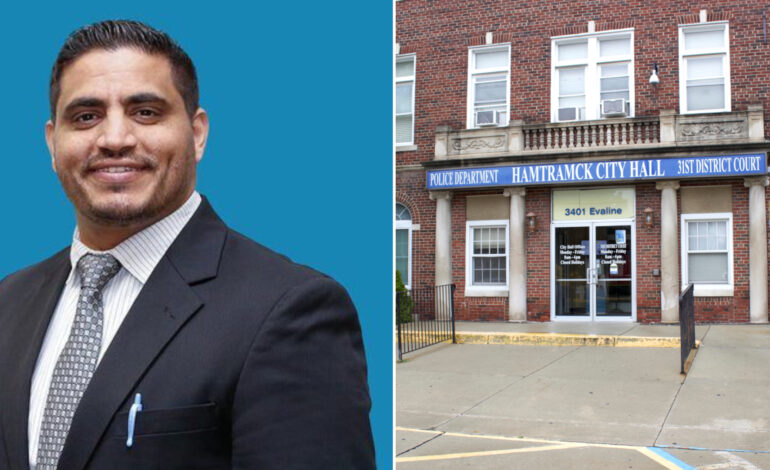 HAMTRAMCK — Saad Almasmari is once again serving the Hamtramck community on its City Council, after former Councilwoman Andrea Karpinski resigned following years of bitter disputes within the body.

Almasmari had previously served since 2015, but failed to recapture his seat at last year’s election. During that reelection campaign, his outstanding property tax debt put his eligibility in question, per the city’s charter.

That question became irrelevant when he failed to secure his seat in the November 2019 election anyway.

With Karpinski resigning, Almasmari was in line to be take her place as the person who received the required amount of votes in the previous election. With his tax debt still outstanding in the days leading up to his reappointment, according to public records, his chances on serving on the Council again came under jeopardy.

Many speculated that Almasmari had help paying off his past-due taxes, which amounted to a little over $3,600. Rumors on the city’s public Facebook groups pointed to the possibility that Zoning Board of Appeals member Nasr Hussain may have helped Almasmari, but no real evidence of that surfaced.

I paid my taxes, no one helped me, no one paid for me. I don’t think any logical person believes that someone will pay for someone to get into Council — Councilman Saad Almasmari

The Arab American News reached out to Almasmari regarding the issue.

“I felt that my community needs me to serve it through Council and therefore I had to accept the seat,” Almasmari said.

On the tax issue, Almasmari said he paid his own debts and no one helped him.

“I’m a very stable person,” he said. “Yes, I had some back taxes that I didn’t pay due to the financial impact of the pandemic. People have not been working, most companies and jobs are on hold. Once I heard I was up for this appointment, I knew I had to (clear) my taxes. I paid my taxes, no one helped me, no one paid for me. I don’t think any logical person believes that someone will pay for someone to get into Council.”

He said he hasn’t seen Hussain since this summer.

Almasmari spoke of the “hot topic” of marijuana in Hamtramck and said he will try his best to stop the influx of recreational pot businesses. The Council has already passed an ordinance banning marijuana, though there is a dispensary already in operation, another that now has a license and at least one more business in the works.

The absence of Al-Marsoumi and former Councilman Anam Miah from a vote on a proposed ban last year meant Hamtramck has had no laws blocking such businesses for the better part of a year. The businesses quietly, and legally, set up shop in that time.

“Unfortunately, two Council members being absent, with or without purpose, from that vote allowed these business to open,” Almasmari said.

Almasmari has hinted that those Muslim Council members’ absence from the earlier vote showed they weren’t serious about banning marijuana. Al-Marsoumi has asked why Almasmari didn’t move the vote to a different day when he got prior notice of their absence. Almasmari has questioned why Al-Marsoumi and the new Council didn’t revisit the subject earlier this year, knowing the consequences of having no ordinance on the books.

I’m sure that at least one of those two members are okay with marijuana and support it and that’s why they were absent. Even if we had postponed the resolution… they would have voted against it or been absent again – Almasmari

Such debate shows at least some discord within the Muslim community about who’s to blame for the previous inaction of its own majority Council. That community is largely united against recreational marijuana facilities in their neighborhoods, for various cultural and religious reasons, though they are not alone in opting-out of the booming marijuana industry (more than 1,300 other Michigan communities have opted-out as well).

“I’m sure that at least one of those two members are okay with marijuana and support it and that’s why they were absent,” Almasmari said. “Even if we had postponed the resolution and brought it back, they would have voted against it or been absent again. I’m a 100 percent sure they were not okay with (that resolution).”

Almasmari did say that he doesn’t think Al-Marsoumi has a personal agenda or financial interest in the marijuana industry, and that he was probably following his friend Miah and listening to him, and only voted to ban marijuana this time around when he noted the Muslim residents’ pushback.

A petition to overturn the new ordinance, or if the Council refuses, to hold a referendum on the issue, is now being circulated and needs fewer than 500 signatures by a Dec. 31 deadline. Petitioners are also looking to add new regulations to catch revenue from marijuana businesses for the city.

There is no doubt that marijuana is a controversial and nuanced issue in the city. Some proponents, many of whom are White, are delicate about Muslims’ cultural and religious reservations, but urge them to look beyond the stigma surrounding the plant. Others are more heavy handed, including those on the progressive and liberal spectrum, and have inadvertently aligned themselves with more old-school racist and xenophobic elements in the city by, for example, routinely criticizing Muslim immigrants of not respecting the American “way of life”, and certain values of personal liberty.

The dog-whistle racism is enough to where even some White residents, who are proponents of pot in general, have publicly pointed out the undercurrent of cultural chauvinism and superiority in the vitriol against both the Muslim community’s concerns and the actions of Muslim Council members.

But a problematic element is also found in the anti-marijuana quarter. Comments in Facebook groups indicate the fear that dispensaries will attract crowds from neighboring Detroit, a predominantly Black city. Such thinly-veiled racism highlights just how strongly stereotypes around the commonly-used plant live on in the urban enclave of Hamtramck. Beyond ideological debates, there is the very real and documented legal drama around the relatively new and murky field of marijuana law in the state.

“Hamtramck is no different from many other communities struggling to adjust to this rapidly developing area of the law,” said Hamtramck City Attorney James Allen. “The issue has led to unprecedented engagement of citizens in their local units of government, not just in Hamtramck but throughout the state.

“The only thing that is not surprising is that a vast majority of the country — some say more than 70 percent — agrees that prohibition is costly and has had disastrous consequences, but these same people simply do not want these businesses in their communities.”

Allen noted there are many reasons people cite for this “not-in-my-backyard” approach to this question, some more valid than others. But as Michigan works through the early implementation of these new laws, Allen said all communities are discovering just how complicated and, quite frankly, expensive this issue has become.

“Local units, once again, are bearing the brunt of this shift in policy with few resources,” Allen said. “Those thinking that taxes and fees on marijuana-related businesses will offset that cost, but that has decidedly not been the case. City administrators across the state are simply overwhelmed at the absolute worst time during a resource-starving pandemic to respond to all of the issues being raised in rapid fire succession.”

As someone who works closely with several city administrations on these issues, Allen is amazed that administrations find the time to do anything other than respond to the barrage of questions that marijuana-related issues generate.

The courts have been all over the place, but it would appear that a strong pro-business consensus has emerged since the 2018 referendum passed allowing adult use (recreational) marijuana facilities — City Attorney James Allen “They are, sadly, like ping-pong balls being volleyed across a table between those having differing views on the wisdom of opening these businesses,” he said.

As for the ramifications of the new ban on businesses under construction, but not in possession of a license just yet, Allen said it will be the state of Michigan that decides their fate.

“I’ve long ago learned to not try to predict what state bureaucrats are likely to do,” he said. “The courts have been all over the place, but it would appear that a strong pro-business consensus has emerged since the 2018 referendum passed allowing adult use (recreational) marijuana facilities. In other words, now that the voters have approved adult use marijuana, I think the courts are telling those same pro-marijuana voters that they should not expect the courts to save them from their own public policy choices.”